Costelloe makes a Getaway with ?58,000 May Store Sale top lot 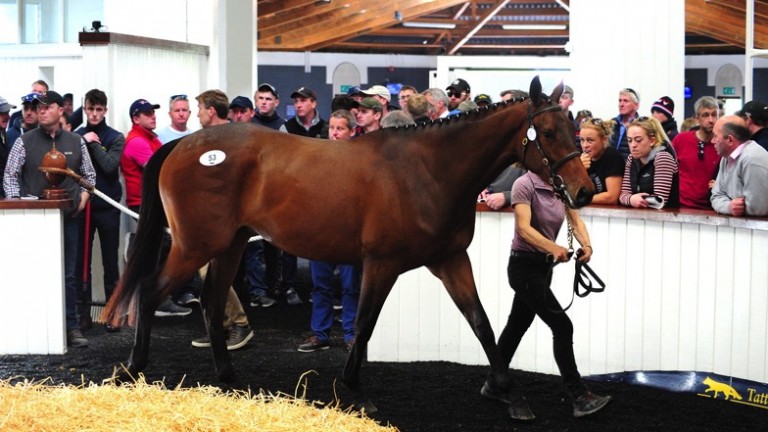 The sale-topping son of Getaway in the Fairyhouse ring before being knocked down to Gearoid Costelloe for ?58,000
Pat Healy
1 of 1
By Robert Cribbin UPDATED 12:03PM, MAY 15 2019

The second edition of the Tattersalls Ireland May Store Sale produced solid trade and saw four horses sell for €50,000 or more at Fairyhouse on Tuesday.

The leading light at Tuesday's event, the first store sale of the season, was a gelding by the popular Getaway, who was purchased by Gearoid Costelloe of GC Bloodstock for €58,000, having been sold by Bay View Cottage. 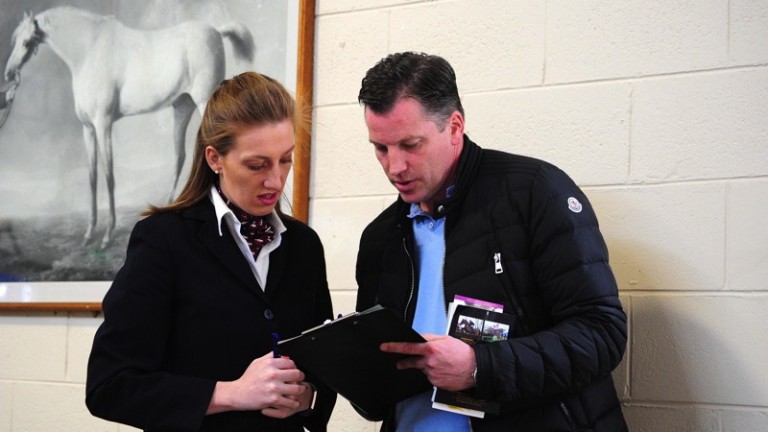 Gearoid Costelloe signs for the sale-topping son of Getaway
Pat Healy
The youngster, who is out of the winning Vinnie Roe mare Dreaming On, had been pinhoked by Bay View Cottage for just €5,000 at Tattersalls Ireland in 2016. Despite gains elsewhere in the figures, the highest price of the day was down on the top figure in 2018, when Aidan O'Ryan gave €65,000 for a son of Fame And Glory.

Costelloe also secured another of the session's top ten lots when going to €46,000 for a son of Califet offered by Liss House. The gelding is out of the Listed-placed seven-time winning mare Histoire De Moeurs, a daughter of Kaldounevees, the dam of bumper and hurdles winner Mabela.

Later in the session the only offering by Rail Link, a three-year-old gelding named Gavarlink, sold to jockey Harley Dunne and point-to-point handler James Doyle for €55,000. The French bred son of the Network mare Stella D'Engilbert was offered by leading consignor Lakefield Farm.

Dunne, who will partner the horse between the flags, said: "What was there not to like about this horse? He's a big, imposing type. We'll get him home, break him in, and he'll be going point-to-pointing with a view for resale."

Those prices were followed closely by the Sholokhov half-brother to Doctor Phoenix, winner of the Dan Moore Handicap Chase and the Grade 3 Newlands Chase, who went the way of bloodstock agent Matt Coleman for €50,000.

"I've bought him for Clive Boultbee-Brooks, who I bought some stores for last year as well," said Coleman.

"I thought this horse has real style and class, he's a lovely mover with a great attitude. The mare has already produced a smart horse and he's by a stallion who has had a Cheltenham Gold Cup winner [Don Cossack].

"He will go back to Clive's farm and a trainer will be decided later on."

The gelding was offered by Rathbarry Stud, who pinhooked the youngster for €20,000 as a foal and also stand Sholokhov, who was advertised at a private fee for 2019.

The second lot to fetch €50,000 was by the in-demand Shantou, with the gelding offered by Ballyreddin Stud signed for Direct Bloodstock, whose Fergal O'Neill said: "He's a lovely horse and by a good, fashionable sire. He goes to Sam Curling."

The gelding had been pinhooked by J D Bloodstock for €14,000.

Harold Kirk, who is heavily associated with the Willie Mullins stable, also got in on the action when landing a son of Jet Away, the Arctic Tack Stud-based sire whose debut crop of stores are on the market this year, for €45,000.

The gelding's dam Cool Trix is a half-sister to the Champion Bumper winner Cousin Vinny who was trained by Mullins and bought by the trainer for €30,000 at the 2006 Derby Sale.

Kirk secured the horse, a €26,000 pinhook by Gerry Hogan Bloodstock, from the Ridgewood Stud draft and was clearly impressed by his purchase.

"This is a gorgeous horse," he said. "Of course we know the family through Cousin Vinny and we were very lucky there. Jet Away seems an exciting young sire and is by Cape Cross, which might put a bit of speed into the mares."

Jet Away won at Group 3 level over 1m2f in Australia, and also picked up a fourth placing in the 2013 Caulfield Cup.

There was also a considerable British presence at Fairyhouse, with dual-purpose trainer Lucy Wadham among those to walk away with a new recruit. Wadham’s daughter Mimi, who runs WH Bloodstock with Violet Hesketh, was in charge of the bidding, and she went to €45,000 for the Fame And Glory filly sold by Busherstown.

The filly, one of three lots by the sire sold during the session, is out of the winning mare Jeunopse, who reached the frame in a Grade 2 event over hurdles and hails from the further family of Beneficial. She was the first homebred to be offered for sale by former leading amateur jockey Nina Carberry.

Meade on the mark

Among the other noteworthy transactions, Noel Meade spent €40,000 on a grey son of Montmartre in what was his second purchase of the day, having earlier snapped up a son of Famous Name for €30,000.

The gelding is out of the dual winner Island Du Frene, who has a blemish-free record as a broodmare as all of her seven runners are winners. They include the ten-time scorer Sarisland, a Grade 3 winner at Auteuil, and Pop Island, the winner of 14 races and Listed-placed in France.

"He's just a lovely mover and he looks a readymade type for four-year-old bumpers next year, hopefully he might be one for the €100,000 sales bumper next Easter," said Meade. "Both Nina Carberry and Mags O'Toole said we had to have him."

Three more lots went for around the €40,000 mark, with Monbeg Stables' Donnchadh Doyle giving that sum for a son of Westerner sold by Noughaville Stud on behalf of Mary Heffernan; Kevin Ross purchased a son of Shantou from Rahinston Stud for the same amount, while Pat Macken landed a gelding by Famous Name from the Liss House draft for €41,000.

"The large presence of UK and domestic purchasers is testament to the market responding to the improved offering. We look forward to the market-leading Derby Sale and a catalogue which reflects depth in both pedigrees and individuals at all levels of the market."

FIRST PUBLISHED 8:36PM, MAY 14 2019
Jet Away seems an exciting young sire and is by Cape Cross, which might put a bit of speed into the mares