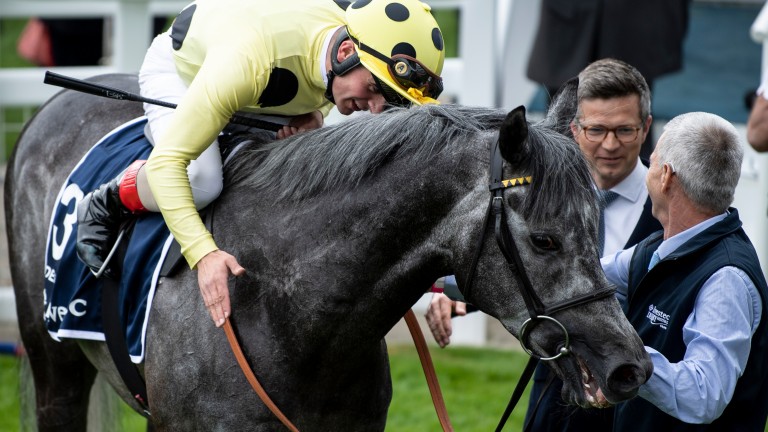 Defoe returns to the winner's enclosure after his Coronation Cup victory
Edward Whitaker
1 of 1
By Martin Stevens UPDATED 4:06PM, MAY 31 2019

A strong run down the outside looked to have secured Kew Gardens a third Group 1 success in the Coronation Cup at Epsom on Friday, but Defoe emerged from the pack to mow down the son of Galileo close home to register his first victory at the highest level.

Five-year-old Defoe, a Darley homebred trained by Roger Varian for owner Sheikh Mohammed Obaid Al Maktoum, becomes the latest gelding to land a Group 1 in Europe this year after Mustashry took the Lockinge and Zabeel Prince – representing the same connections as Defoe – won the Prix d'Ispahan.

He is the first foal out of Dulkashe, who was trained by Luca Cumani to win a 1m2f Class 4 Nottingham handicap at three and was never tried in black-type company.

The dam is a half-sister to Listed-placed miler Akira (by Acclamation) and she in turn is out of Saik, an unraced Riverman half-sister to Husyan (by Alleged), winner of the Brigadier Gerard Stakes and Scottish Classic and later sire of useful jumpers such as Liss A Paoraigh and Takagi, and to the dam of Mubtaker (by Silver Hawk), who earned a sky high Racing Post Rating of 131 for finishing a close second to Dalakhani in the Arc.

Originally a €120,000 Goffs Orby yearling purchase, Dulkashe found herself surplus to Darley's requirements in 2015, the year after she delivered Defoe, and she was sold on in foal to Shamardal to Faisal Al Thani for 90,000gns at the Tattersalls December Breeding Stock Sale.

Defoe is the only foal Darley produced from Dulkashe, who has a three-year-old colt by Shamardal named Ghanim and a two-year-old filly by Toronado bred by Sheikh Al Thani. They are the mare's only progeny registered with Weatherbys.

The Coronation Cup continues the incredible run for Pivotal as broodmare sire as Defoe becomes the 20th top-flight winner out of a mare by Cheveley Park Stud's outstanding servant. He is the third this year alone, after Hermosa and Magical, who are both by Galileo.

FIRST PUBLISHED 4:05PM, MAY 31 2019
Originally a ?120,000 Goffs Orby yearling purchase, Dulkashe found herself surplus to Darley's requirements in the year after she delivered Defoe