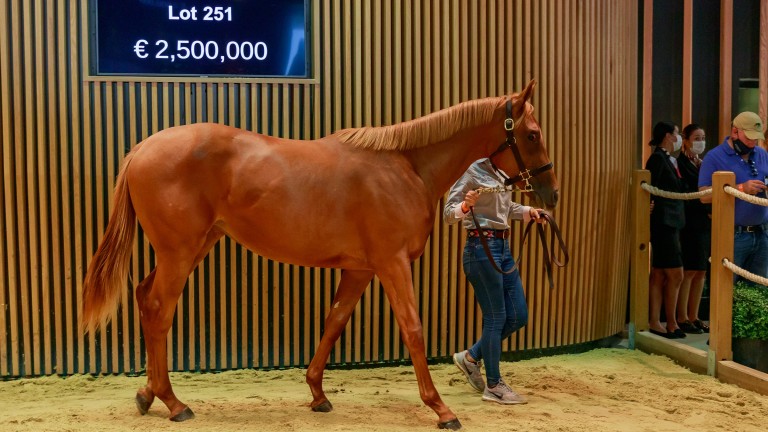 Seven-figure lots came like London buses at Arqana on Thursday as, after a somewhat sticky opening session, an anxious wait for the Select Sale's first millionaire yearling was ended when three arrived within quick succession.

Leading the way was the Dubawi filly out of Starlet's Sister, who was knocked down to Oliver St Lawrence at €2,500,000 after a sustained bidding battle.

Auctioneer Ludovic Cornuel introduced the blue-blooded youngster as "something a bit unique, a real, real collector’s item", but was forced to go as low as €200,000 before receiving a rather optimistic opening bid.

The price jumped up in €50,000 raises, a strategy that bidders persisted with well into seven-figure territory. At the €2.1 million mark Cornuel's gavel was raised and it seemed as though the filly had reached her value, but it was then that St Lawrence raised his iPad aloft from his position by the gangway to signal a play of €2.2m.

Anthony Stroud, who had secured day one's session-topping Dubawi filly on behalf of Godolphin at €620,000, fired back with another €50,000 raise, but when St Lawrence, standing with Fawzi Nass, pushed the price to €2.5m a frustrated Stroud was forced to concede.

Nass revealed the regally-bred filly was likely to head into training in Britain for a new partnership involving some emerging owners on the European racing scene.

Nass said: "She’s obviously a very nice filly given her pedigree. She's been bought on behalf of his Highness Sheikh Nasser Al Khalifa along with KHK Racing, and hopefully she’ll be in training in the UK. We haven't decided on the trainer yet but we'll find out soon." 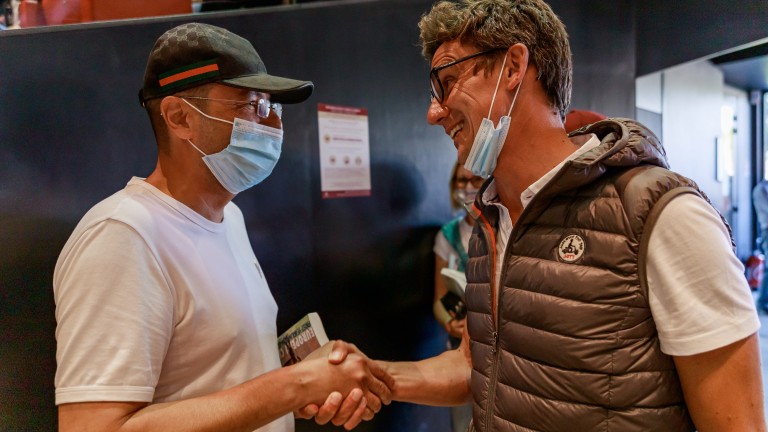 Fawzi Nass shakes hands with Ecurie des Monceaux's Henri Bozo after securing the €2.5m Dubawi filly
Zuzanna Lupa
Asked if he had felt confident about securing the filly given the heavyweight bidding battle, Nass replied: "We know the buying power is there but it's difficult to put a value on the filly. Obviously the market has a strong appetite for a filly like that.

"Whether we've overpaid we'll find out, but I don't think so. They're scarce to come on the market."

The strong-looking chestnut is the sixth foal out of Starlet's Sister, who has quickly emerged as one of the world's most exciting producers for Ecurie des Monceaux. Her first foal is Sistercharlie, a daughter of Myboycharlie who was conceived at a covering fee of just €6,500 but has gone on to win seven Grade 1s in the US for owner Peter Brant.

Starlet's Sister's second foal is the Group 3-winning My Sister Nat, while her third is none other than Sottsass, winner of last year's Prix du Jockey Club and this year's Prix Ganay. The son of Siyouni could gain yet more Group 1 success in Saturday's Irish Champion Stakes. 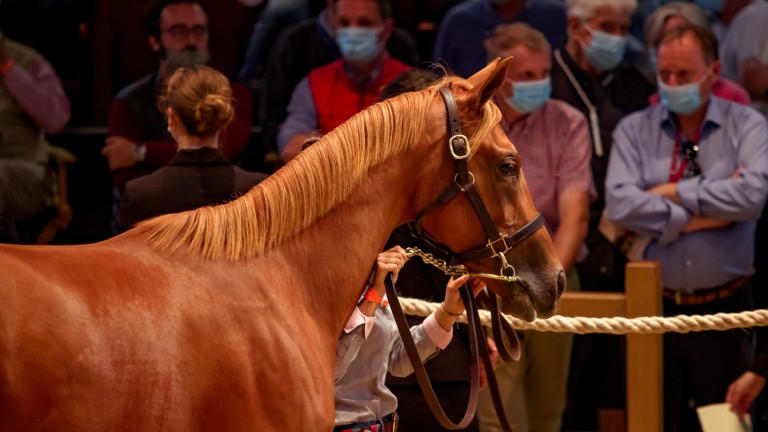 The sale-topping Dubawi filly surveys her surroundings in the Arqana ring
Zuzanna LUPA
Starlet's Sister is by Galileo, meaning Thursday's top lot is bred on the same cross as the likes of Ghaiyyath and rising star sire Night Of Thunder. The mare, whose yearlings have grossed €3.972m, produced another Dubawi filly in April.

The red and white silks of Sheikh Nasser Al Khalifa have been carried to Group-race success by the likes of Al Raya and Daahyeh, while the owner's Queen Daenerys won the Listed Prix Joubert at Longchamp shortly before the €2.5m Dubawi filly sold.

Although a more recent addition to the ranks of owners in Britain, KHK Racing has already enjoyed a notable result, with Bahrain Pride, a 300,000gns buy through Stroud Coleman Bloodstock at the Tattersalls Craven Breeze-Up Sale, having landed the Listed Ripon Champion Two-Year-Old Trophy for Simon and Ed Crisford.

Trade had run below the levels often associated with Arqana's flagship yearling sale on day one, but an opening bid of €200,000 for Ecurie des Monceaux's Galileo colt suggested normal service would be resumed for a member of a family that has made the Deauville auction ring its own.

The colt, who has a distinctive heart-shaped blaze on his face, is the ninth foal out of Prudenzia, not only dam of Magic Wand but also Irish Oaks heroine Chicquita, who was purchased by Coolmore for an Irish public auction record €6m in the same year as her Classic success.

However, it is with the Arqana sales ring that Prudenzia's progeny are most closely associated as the daughter of Dansili has supplied seven-figure yearlings with clockwork-like regularity. Remarkably, the Galileo colt becomes the sixth of Prudenzia's offspring to break into seven-figure territory, and takes her Arqana yearling receipts to a staggering €10.195m. 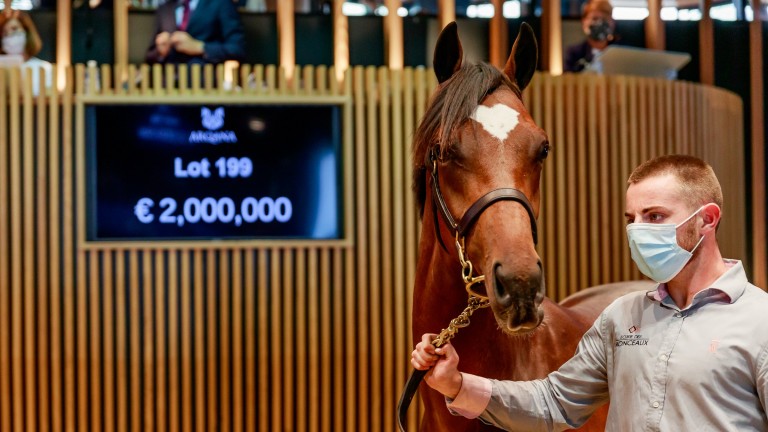 Lot 199: the Galileo brother to Magic Wand brings €2,000,000 in the Arqana ring
Zuzanna Lupa
From the opening play of €200,000 the price continued to rise in €50,000 increments, and once the bid board had sailed beyond €1m matters soon rested between Magnier and David Redvers.

Cornuel conducted proceedings with his usual understated authority. At the €1.7m mark he addressed the auditorium, which had fallen all but silent with suspense, and said, looking down on the regally-bred youngster: He's the real deal, this colt."

As €50,000 bids continued to be traded, Redvers pushed the price to €1.8m. However, he was swiftly blown away when Magnier threw in a €200,000 raise that brought Cornuel's gavel down.

"She comes from an excellent family and is by Galileo, who is having another great year," said Magnier after being congratulated by Lady O'Reilly, who bred the colt in partnership with Monceaux.

"As Lady O'Reilly just said, she’s been an incredible mare and he’s a special horse. Hopefully it works out. We thought he was very nice, he's got a good hind leg and is a very good mover, all our guys really liked him. 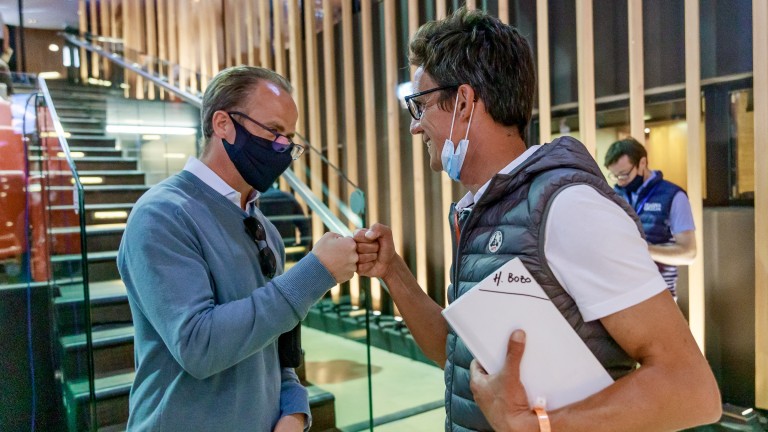 Coolmore's MV Magnier (left) is congratulated by Ecurie des Monceaux's Henri Bozo
Zuzanna Lupa
"He seemed to be very popular on the sales ground so we're happy to have got him. Magic Wand has been very good to us and hopefully this fella will end up as good.

"Monceaux and Henri [Bozo] do an incredible job, they always produce very good horses. It's great for them and they deserve it for all the work they put in."

Prudenzia's other seven-figure yearlings are the €1.1m Sinnamary, the €1m Truth, the €1.1m Craven's Legend, the €1.4m Magic Wand and last year's August Sale top lot, the €1.625m Dubawi filly Philomene, who made a winning debut for Godolphin last Thursday.

The Listed-winning Prudenzia is out of Monceaux's foundation mare Platonic, who has also produced Group 3 scorer Pacifique and Lingfield Derby Trial victor English King. Platonic was purchased from the Cumani family's Fittocks Stud for 100,000gns at Tattersalls in 2004.

Although Godolphin's sales ring ally Stroud missed out on the sales-topping Dubawi filly, he enjoyed better fortune when securing the previous lot into the ring, a Kingman colt offered by Haras de Capucines, at €1.1m.

The colt is the second foal out of Speralita, a Frankel half-sister to Stacelita, winner of six elite races the world over, including the Prix de Diane and Beverly D Stakes. Stroud said of Godolphin's seven-figure buy: "We've had Palace Pier and Persian King, so we're very fond of Kingman; he's a very good sire. He was a very impressive horse." 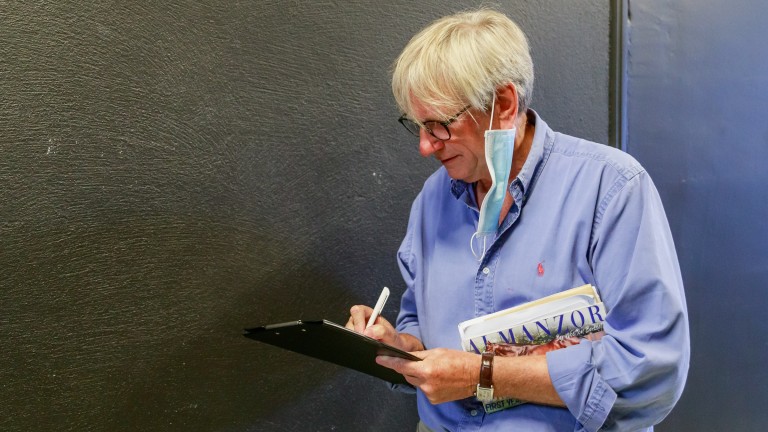 "The Galileo colt made €2 million, the Dubawi filly made €2.5 million; it just shows you that it sustains through difficult times."

Leading French trainer Jean-Claude Rouget made another of the day's more eyecatching purchases when he went to €700,000 for the Siyouni half-sister to Polydream when the filly was offered by Monceaux, who sold 23 yearlings for a total of €9.835m during the Select Sale's first two sessions. 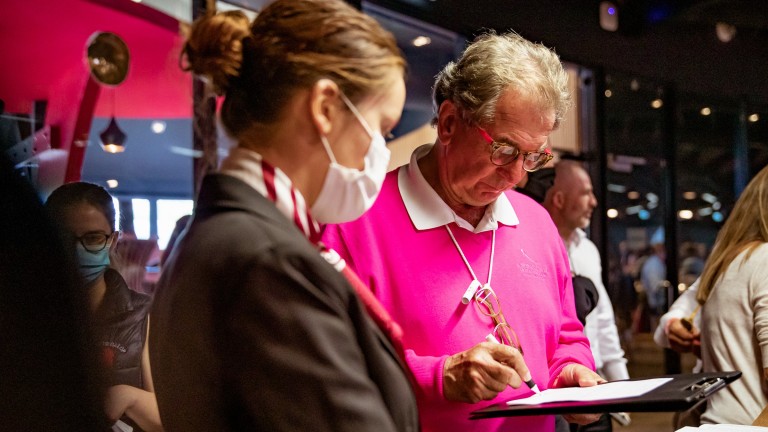 Jean-Claude Rouget signs the docket for the €700,000 Siyouni filly
Zuzanna Lupa
Rouget revealed his acquisition was made on behalf of leading US operation Gainesway Farm, home to stallions such as Tapit, Karakontie and Afleet Alex. The trainer said: "I will be training her for Gainesway Farm. Physically she is very good."

The Siyouni filly is a sibling to three other black type performers, namely Listed scorer Evaporation, the Listed-placed Ankle and Big Brothers Pride, winner of the Group 3 Prix Sigy for Kin Hung Kei and Qatar Racing before being sold on to BBA Ireland for 975,000gns at last year's Tattersalls December Mares Sale.

It took just six lots for day one's high mark to be surpassed as Sebastien Desmontils of Chauvigny Global Equine emerged victorious from a three-way tussle at €630,000 for the Frankel filly out of Militante.

Another sought-after lot to be supplied by Monceaux, the January-born bay is a half-sister to two black-type performers, most notably the Group 3-winning and Group 1-placed Wind Chimes.

"I thought she was a very nice filly and she has a lovely page," said Desmontils, who was again bidding from the restaurant. "Obviously the underbidder is one of the biggest breeders in Europe or in the world in Juddmonte so we’re delighted.

"Obviously she's very classy and she looks like she could be a Diane filly, which is what is exciting for us. Then she has a huge residual value because of the pedigree so we're very happy." 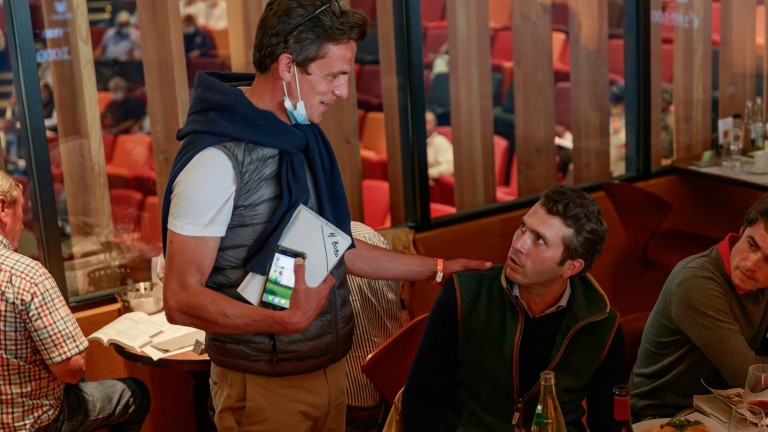 Henri Bozo of Ecurie des Monceaux congratulates Sebastien Desmontils (right) after purchasing lot 157 for €630,000
Zuzanna Lupa
Desmontils revealed he had been acting on behalf of owner Hisaaki Saito, though added that no decision had been made with regards to who will train the six-figure filly. The agent said: "The owner is a young Japanese client who is a huge racing fan, is very keen on French racing and loves his pedigrees.

"He's already had a winner in Deauville with Early Light and hopefully he'll have many [more] coming. He's got two horses in training with Fabrice Chappet and two with Henri Devin so we'll see where this princess goes; we're not sure yet so we'll decide after she's been broken in."

By the close of trade on Thursday, Chauvigny Equine Global had signed for six lots during the first two sessions for a total outlay of €1.677m

The Arqana Select Sale concludes on Friday with a session starting at 10am (11am local time).

Treve's sister sold for €520,000 to Qatari owner and will stay in France

FIRST PUBLISHED 4:19PM, SEP 10 2020
We thought he was a very nice horse, he's got a good hind leg and is a very good mover, all our guys really liked him