'I've been torturing myself trying to sort out my golf swing' 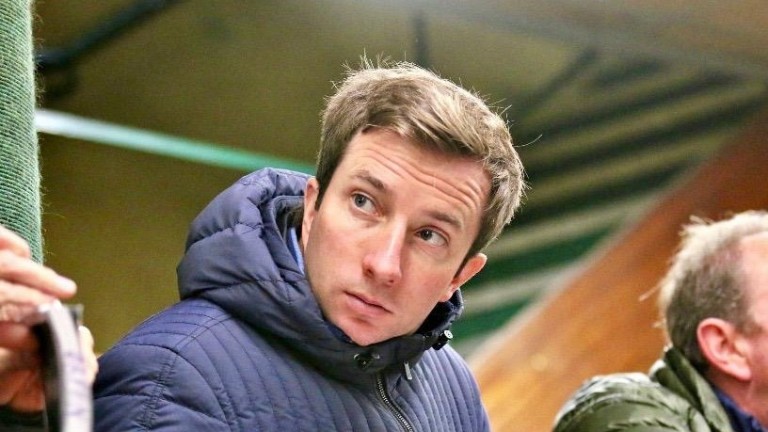 Colm Sharkey: studying form in preparation for the resumption of racing
Goffs
1 of 1
By Martin Stevens UPDATED 4:10PM, APR 25 2020

Bloodstock agent Colm Sharkey tells us about how he is managing – both personally and professionally – with the Europe-wide lockdown to halt the spread of the coronavirus.

How is life ticking over for your agency, CDS Bloodstock Ltd?

Life is quieter for sure! The first big change for me personally was my destination – my wife and I are London-based but as soon as we realised how serious this situation was going to be, we made the decision to go to the country. We've now been here for just over three weeks and are extremely lucky as we're on a farm, so plenty of space and fresh air at this time.

Aside from the obvious of no racing, sales and so on, the lockdown has led to plenty of free time as I would usually be quite active going out and about each week.

We've settled into a good routine here and we have an office set up, which works well. I like to have some structure each day, so I try to follow my normal routine as it keeps the mind healthy.

I had some nice young National Hunt horses who were showing potential and were due to run but instead they've all gone on an early holiday, so initially I was kept busy liaising with my clients and the trainers about their movements. I've also been trying to make some long-term targets for the Flat horses that are in training.

As I buy a lot of horses in training I've spent plenty of time going through form and watching race replays looking for horses that could potentially suit Australia and Hong Kong.

It's time consuming but I enjoy it and I hope the hard yards will pay off when racing does resume. I've also done some prep for the upcoming breeze-up Sales. One positive is that the breeding side of the industry is carrying on, which I think will be integral going forward.

I'm all for innovation and change because usually the world doesn’t stand still. People and industries need to adapt.

I would be in favour of online sales if I had previously seen the horse in the flesh, as there is no substitute for that. If potential buyers knew of somebody they could trust (a good agent) who had seen the horses previously then I believe that it could work.

But for example, I think there are obvious limitations in trying to buy breeze-up horses from videos alone and I wouldn't be in favour of it. Mainly as I don't think that it would be fair on either the vendor or buyer as videos and/or online platforms don’t always give the full picture and can be misleading.

Make A Challenge has been a big success for you and Denis Hogan – bought for just £6,500 and a six-time winner and a close fifth in the British Champions Sprint. What's the plan for him in 2020?

After his six victories last year, I think handicaps are out of the equation! Denis is doing an excellent job with him – he went from an official mark of 68 to 112.

He's quite versatile, having won over five furlongs to seven furlongs, so once racing resumes, and all being well, he will follow the pattern of stakes races over sprint distances in Ireland.

Depending on how this season shapes up with the pandemic, his season could culminate in possibly either, or both, the Abbaye at Longchamp or the sprint on Qipco British Champions Day at Ascot. He's most effective with some cut in the ground.

On a personal level, how are you keeping yourself busy during lockdown?

We've maintained our morning routine to get the dogs out for a walk at 6.30am each morning, which is a stunning part of the day. I have a mini gym set up which I use daily.

I've also been torturing myself trying to sort out my golf swing.

Netflix has been getting a bit of use – I would definitely recommend The Stranger and Tiger King. I do enjoy Gogglebox and would also recommend the series Liar on ITV. I'm looking forward to watching the third series of Killing Eve which resumes this weekend.

While in the mini gym I listen to podcasts. For any golf fans I recommend The Pepperpod with golfer Eddie Pepperell and Andrew Cotter and I also listen to The David McWilliams Podcast. I find that the latter helps to keep me slightly in the loop about what’s happening in economies worldwide.

Andre Agassi’s autobiography Open has just arrived along with another book called 'One Putt’ (which is self-explanatory).

What's the availability of groceries and essential products around you like?

We're very lucky on that front as my mother-in-law’s freezer is well stocked and there are four chickens in the garden who keep us in eggs.

We haven’t had to worry too much as there is a local Waitrose and Moulton village shop, which is excellent, and there are some nice farm shops in the surrounding area.

Normality and some routine. Hopefully the Classics can be salvaged. If there can be a pretty full programme from June onwards, I don't think it will be a bad outcome considering what's going on in the world at the moment.

When racing recommences, it will hopefully lead to sales resuming, which can only be a positive for the industry.