£410,000 purchase impresses on his first start for Gordon Elliott 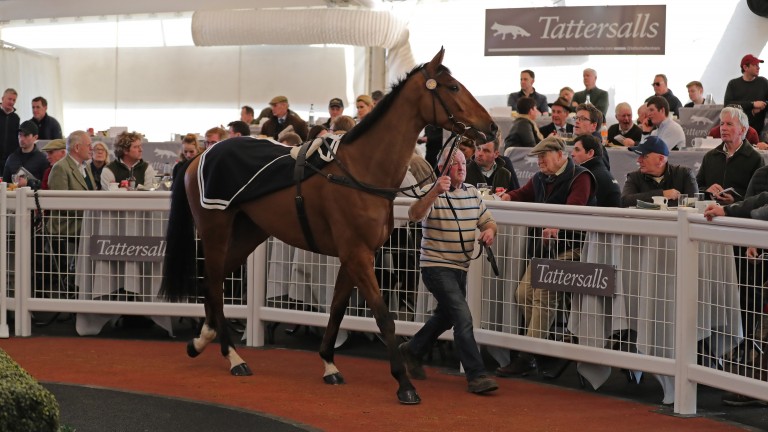 Wide Receiver goes through the ring at Cheltenham in February
Debbie Burt
1 of 1
By Martin Stevens 6:51PM, DEC 7 2019

The Gigginstown House Stud-owned bay was always travelling strongly under Lisa O'Neill in the two-mile bumper that closed Navan's card, and eased to the front two furlongs from home before staying on well to record a two and three quarter-length victory over the Mags Mullins-trained Julies Stowaway (by Stowaway).

“He was bought to be a good horse,” said Elliott after the race. “He's raw and doesn't do much at home but he's a horse for next year.

“He won't do much more this year and we'll mind him to go jumping next year. Lisa said she was never going to get beat but he was very green, he's a baby. He got light on us and we had to back off him. He's a horse for the future.”

The reason Elliott and Tom Malone had to stretch to £410,000 for Wide Receiver was his eight-length success in a four-year-old maiden point-to-point at Cragmore for previous trainer Cormac Farrell in February.

Farrell, who had bought the horse for €25,000 as a store at the Tattersalls Ireland Derby Sale, subsequently resold him at Cheltenham through his Leamore Horses operation, and he told the Racing Post in an interview pubished in April: “He never missed a beat – he's just a proper, proper racehorse.

“Mind you, although we liked him a lot, when he won at Cragmore in February we were a little surprised just how easily he did it. It took Simon [Cavanagh, jockey] about three quarters of a mile to pull him up. He must have some engine.”

Wide Receiver is by Glenview Stud-based stallion Sholokhov, winner of the Gran Criterium at two and runner-up in the Irish Derby and Eclipse at three.

The 20-year-old son of Sadler's Wells was formerly based in Germany, where he supplied horse of the year Night Magic on the Flat, but he has become better known as a useful jumps sire, thanks in no small part to his Cheltenham Gold Cup-winning son Don Cossack.

Sagarich also has a three-year-old son by Presenting who was not sold at €78,000 at this year's Derby Sale, a yearling colt by Sholokhov and a filly foal by Milan.