Champ's half-brother Walkonthebriteside to step out at Galway

Sam Curling saddles the relation of the great Best Mate 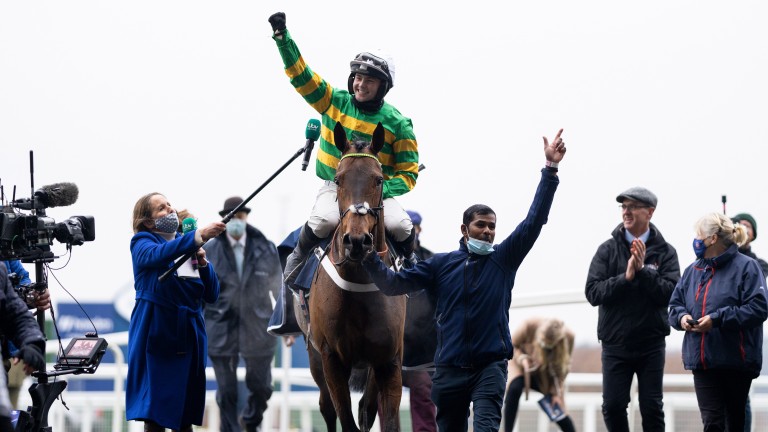 While most bloodstock interest will undoubtedly centre upon the first day of action at Tattersalls on Tuesday, several well-bred newcomers will be providing an indication that the National Hunt season is swinging back into action.

Of particular note is a runner in Galway’s concluding race, the Student Raceday On Monday 31st October INH Flat Race, with Champ’s half-brother Walkonthebriteside set to make his debut.

Philip Myerscough has retained the four-year-old son of Walk In The Park, trained by Sam Curling, with his family responsible for breeding Champ, who has top-level successes over hurdles and fences, landing the Long Walk at Ascot last December as well as what is now known as the Brown Advisory Novices' Chase at Cheltenham back in 2020.

When at the helm of Baroda Stud, the Myerscough family acquired Katday, dam of the great Best Mate. Among her other progeny was China Sky, a maiden in a light career for Nicky Henderson but now responsible for Champ as well as three-time winner Drury.

Walkonthebriteside, who was bought back as a foal and was withdrawn from two store sales last year, has plenty of opposition headed by the Willie Mullins-trained Alhebayeb gelding Allibaba, who has speed on his dam’s side, and Wasthatok, who went off favourite for the George Mernagh Memorial Bumper at Fairyhouse but didn’t quite get home.

FIRST PUBLISHED 12:44PM, OCT 3 2022
When at the helm of Baroda Stud, the Myerscough family acquired Katday, dam of the great Best Mate