Mutaany is also a half-brother to Hungerford Stakes scorer Massaat 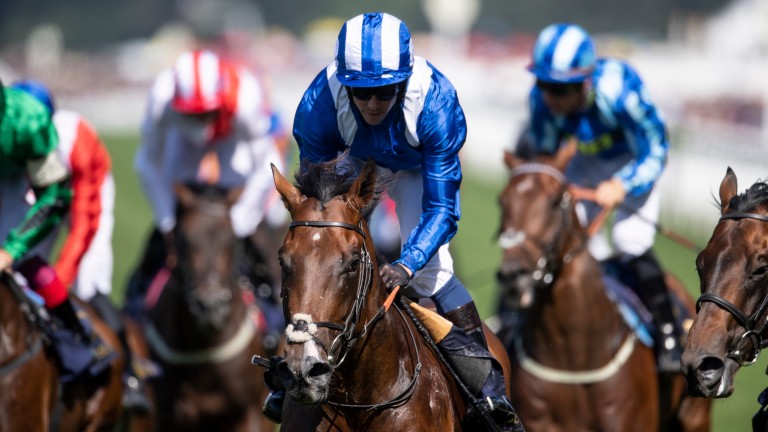 Eqtidaar: winner of the Commonwealth Cup and Nunnery Stud sire
Edward Whitaker
1 of 1
By Kitty Trice 12:54PM, MAY 25 2022

Charlie Hills is set to saddle Shadwell's brother to Commonwealth Cup hero and Nunnery Stud sire Eqtidaar in the Betfred Passionate About Sport EBF Maiden Stakes at Haydock (2.10) on Thursday.

The son of Invincible Spirit is the seventh foal out of Madany, a daughter of Acclamation who won twice at two for Hills and is a half-sister to Prix du Bois scorer Dolled Up and stakes winner Zeiting, the dam of Strensall Stakes winner and Caulfield Cup second Scottish, as well as Geoffrey Freer Stakes victor Royal Empire and German Group 2 winner Combat Zone.

Madany was bred by Mesnil Investments and sold to Amanda Skiffington for 45,000gns as a foal from Tattersalls, when consigned by Knocktoran Stud, before selling to Shadwell for 130,000gns at Book 1 the following year.

The 14-year-old is now a high-class producer, being responsible for not only Eqtidaar but also Hungerford Stakes victor and 2,000 Guineas and Dewhurst Stakes second Massaat, who is now standing at Mickley Stud.

Eqtidaar, whose finest hour came when defeating Sands Of Mali at Royal Ascot in 2018, was also second to Invincible Army in the Pavilion Stakes. He was retired to Nunnery Stud in 2020 and stands for a fee of £5,000. His first crop are now yearlings this year.

Madany is also responsible for 2020 Horris Hill Stakes winner Mujbar, a son of Muhaarar, and five-time winner Hathiq, who is by Exceed And Excel. She also has an unraced three-year-old filly by Frankel called Manaafis.

Also declared are Maxi King, a once-raced half-brother to Gimcrack Stakes winner and Group 1-placed Minzaal, and Royal Dress, a Night Of Thunder half-sister to the stakes-placed Wedding Dance and from the family of Group 3 winner Queen's Best.

Trained by Simon and Ed Crisford, the filly is set to face six rivals in the mile and a quarter contest, including Darmoiselle, a sister to Too Darn Hot, Lah Ti Dar and So Mi Dar, and Mimikyu, a sister to Journey and Indigo Girl.

Love at first sight: Hicky Parmar on his horses and his new bloodstock adventure

Every option available to the Irish Guineas winner Homeless Songs