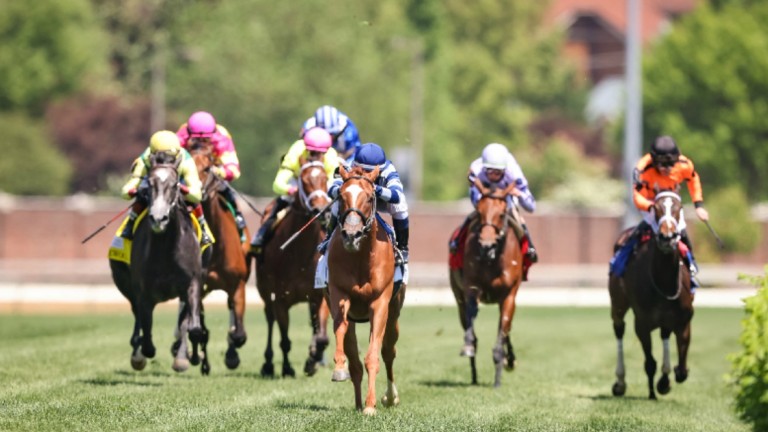 Gift List came four lengths clear of her rivals at Churchill Downs
EquiSport /Wendy Wooley
1 of 1
By Tom Peacock 11:33AM, MAY 1 2021

There was a British-bred winner on the Kentucky Oaks undercard at Churchill Downs on Friday as the ex-Karl Burke-trained Bated Breath filly Gift List maintained the smart progress since her Stateside arrival in the Grade 2 Edgewood Stakes.

Now trained by Brian Lynch, Gift List won twice for Burke and John Fretwell as a juvenile and was second in the Radley Stakes before moving on to Amerman Racing Stables, for whom she was second on her US debut in the Grade 2 Appalachian Stakes in early April.

The three-year-old was bred by James Ortega Bloodstock, the boutique breeding operation of Jim Atkinson and Marta Ortega, which is largely run from Manor House Farm Stud in Hertfordshire. They consigned Gift List at Book 3 of the Tattersalls October Yearling Sale, where Fretwell bought her for 23,000gns.

Gift List is out of former Darley mare Birthstone, a daughter of Machiavellian and winner of the Group 3 Prix d'Aumale for Alex Pantall. She produced four minor winners for Godolphin around Europe prior to her sale in 2016.

Aunt Pearl goes down as former English filly Gift List, for @jjcjockey & @BLynchRacing, races away with the G2 Edgewood and boy oh boy does she look to have a very bright future indeed!#TwinSpiresReplay pic.twitter.com/xOVnU4RtzU

She became an 11th Group winner for Banstead Manor resident Bated Breath, and his 16th of any black type denomination.

Lynch said: "Off the last race, in her first US debut, she gave a great run that day, in a race that had no pace. She’s really trained so well from her last start to this, even though we had to work her on the dirt, which was a new thing to her.

"She was very comfortable getting over it, and was getting plenty out of her works. I had a good feeling going into this race, that if Aunt Pearl were to stub her toe, we’d have a good shot.

"She (Aunt Pearl) was a big obstacle, no doubt. Undefeated filly. Breeders’ Cup winner. But we all know, and I’ve run into it myself with Oscar Performance, some of them take to this course and some just don’t. It had a little bit of give in it today, and my filly had some good races on soft and heavy turf. Maybe that had something to do with it."

FIRST PUBLISHED 11:33AM, MAY 1 2021
I had a good feeling going into this race, that if Aunt Pearl were to stub her toe, we’d have a good shot

'We love Kodiac even more now!' - €340,000 filly gives Fitzgerald dream result Death of Jersey Stakes winner Kheleyf aged 20 at Haras des Faunes Spinster Stakes winner Valiance to be offered at Fasig-Tipton November Why Amo Racing has been busy on both sides of the Atlantic David Redvers on Roaring Lion's legacy and Kameko's fast start at Tweenhills 'It's very important to the country and the bloodstock industry in Ireland'