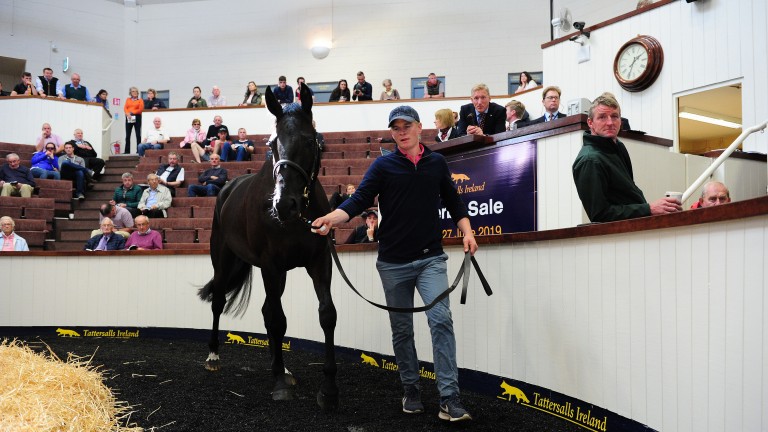 Lot 73: the Sluggara Farm-consigned Gigolo' Dai Dai in the Fairyhouse ring before being knocked down to Kevin Ross
Pat Healy
1 of 1
4:54PM, JUN 27 2019

National Hunt buyers from across Europe flocked to Fairyhouse for day one of the Tattersalls Ireland Derby Sale on Wednesday, and the assembled buying bench contributed to a decidedly solid session of store trade.

The upper echelons of the market were in particularly rude health, and by the close of trade 12 lots had fetched a six-figure sum. Leading those prices was Gigolo' Dai Dai, a son of Al Namix bought by Kevin Ross Bloodstock for €190,000.

"He's a lovely horse," said Ross, who played the winning hand from the top tier of the auditorium high above the auctioneer's rostrum. "The first offspring out of the mare is a decent horse, which is nice.

"We've been through all the horses here and he was one of our favourites. We had to push the boat out but we thought he was worth it given the type of individual he is. He's been bought for Chris Jones so he'll go back to Chris's place, Killeen Glebe, and be prepped there. I'm not sure where he'll head after that.

"When you're buying a store at that sort of money you have to think that they're capable of going to the very top, and the stallion can obviously get a good horse." 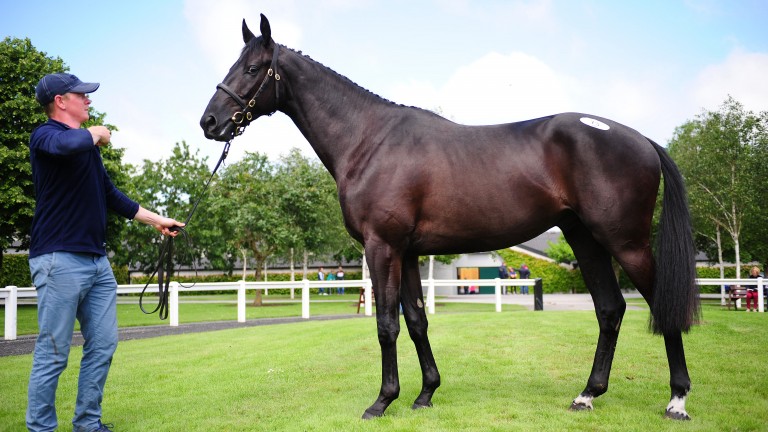 Lot 73: the session-topping son of Al Namix strikes a pose in the Tattersalls Ireland parade ring
Pat Healy
The three-year-old, offered by Walter Connors' Sluggara Farm, is the second foal out of the Network mare Unique Chance. Her first progeny is the smart Diamond Guy, winner of three races from five starts for Paul Nicholls.

Connors said: "I bought him as a foal out in France, myself and Seamus Murphy buy a few foals each year and he was one of those. He's been with us since then and we've always liked him. Al Namix is proven and, if we can, we'll go for the progeny of those proven sires."

On topping the session, Connors added: "It's a great excitement for us, but we'll get just as much excitement following him in the future. He's a very attractive horse and I hope he fulfills the dreams of the people who've bought him."

Roxborough Stud's Barry Fitzgerald was among a host of pinhookers to collect an eye-catching profit during the session, as Mags O'Toole stretched to €180,000 for the Milan gelding out of Toledana, who had been bought in the Fairyhouse ring as a foal for €26,000 back in 2016.

"He's a gorgeous horse and he's had loads of interest over the last three days, everyone loved him," said a delighted Fitzgerald. "We bought him here as a foal, he came highly recommended by Michael Moore of Ballincurrig House Stud.

"We had Monalee, who's by Milan too, and Henry de Bromhead thought he looked like Monalee. To get a compliment like that from a trainer like Henry is brilliant."

Bidding for the three-year-old, who is out of a half-sister to Grand Annual Handicap Chase winner Oiseau De Nuit, opened at €100,000. When asked what was going through his head after such a punchy opening bid, Fitzgerald said: "It was unbelievable, you just hope it'll kick on!"

O'Toole seemed equally pleased with her purchase, and said: "I've been thinking about this horse for two days. I thought he was the nicest horse I've seen on the sales ground and didn't think I'd be able to buy him so I'm thrilled to have got him. He'll go to Henry de Bromhead."

If Derby Sale spending habits are anything to go by, upwardly mobile young trainer Olly Murphy will have a formidable team of horses to go to war with in the near future, as he and his father, bloodstock agent Aiden Murphy, secured three of the session's top ten lots.

The pair's first acquisition was their most expensive, as they gave €170,000 for the Kayf Tara gelding out of the Listed-winning hurdler Whoops A Daisy.

The three-year-old, offered by Norman Williamson's Oak Tree Farm having been signed for by Aiden Murphy at €65,000 as a foal, was bred by Sally Aston and Nicky Henderson, who watched on with interest from the opposite side of the ring.

"I thought he was the best walker in the sale and I already know the family fairly well," said Olly Murphy. "I trained the half-sister, Angel Of Harlem, she's very tough so if he's half as tough as she is he'll be fine.

"Trade has been strong, I'd say it's going to remain strong as there's plenty of nice horses to come later and tomorrow, which is good to see. Hopefully we'll be busy now we've got the first one out of the way!"

The trainer's assertion proved on the money, as later in the session the father-son duo landed a quickfire brace of lots by Fame And Glory, both offered by Lakefield Farm.

Later in the session the father-son duo landed a quickfire brace of lots by Fame And Glory, both offered by Lakefield Farm. The first, a gelding out of Blazing Moon, fetched €125,000, swiftly followed by the son of the Jolly Jake mare Bolly, who supplied a chunky profit on his €16,000 foal price when he brought a final bid of €165,000.

The youngster's page had been subject of a notable update since Lakefield Farm signed for him at the foal sales, as he is a half-brother to the dam of the Grade 2-winning novice hurdler Birchdale. His own dam is a half-sister to high-achieving talents such as Thisthatandtother and Carlingford Lough.

"I think it was the last day of the foal sales and people must've spent up," said Lakefield Farm's John Bleahen when asked how he secured the six-figure store for such a modest sum.

"I remember seeing him exercising in the morning and he was just a standout. I was very lucky that his pedigree improved as that's a huge factor. He's by Fame And Glory - I thought he was a sensational sire and he's the biggest loss to the breeding industry I've ever seen.

"Everybody loved this horse I knew he was going to be an easy sell. Although I would've been happy with half of that price!"

Having enjoyed a handful of touches during the opening session, Bleahen also gave a positive appraisal of the state of trade, saying: "Tattersalls Ireland have done a great job - they had a hard act to follow after Goffs, which was outstanding, but they've stepped up to the mark and we're grateful for that.

"I've been coming here every year since I was 18 and I just love it, the game has been very good to us. Even though we're mainly farmers we've had Sizing John, Sizing Europe and Mala Beach come out of our place. We have a great team of staff, we couldn't do it without their hard work."

The 11th six-figure lot of the session came when Ronnie O'Leary, stood down in the packed gang way, gave €160,000 for the Martaline gelding out of Daprika offered by Oak Tree Farm.

"He's a lovely horse, I probably paid a little bit more than I wanted to but I didn't want to lose him," said O'Leary.

"He's from a great family and I thought he was one of the prime lots that came in today. We'll get him home and start from the bottom and look to run him in a bumper. He's bred for jumping so let's hope he'll be lucky."

Daprika, a two-time winner by Epervier Bleu, is a half-sister to seven winners, including Christmas Hurdle winner Geos and the high-class Kapgarde, who is better known as the sire of talents such as Clan Des Obeaux and A Plus Tard.

Despite such an illustrious page, Norman Williamson's Oak Tree Farm secured the well-related youngster for just €36,000 at the Tattersalls Ireland November National Hunt Sale in 2016.

Tom Malone ensured Aiden and Olly Murphy didn't have it all their own way, having outlasted the pair with a bid of €150,000 for the Flemensfirth gelding out of The Crown Jewel, who was offered by Peel Hall Stables on behalf of Thoroughbred Enterprises 2.

The three-year-old, pinhooked as a foal by Will Kinsey's Peel Bloodstock for €32,000, is the first produce of a Stowaway half-sister to Cheltenham Festival winner Empire Of Dirt and Graded chase winner Panther Claw.

"I thought he was a star and he has the pedigree to be one, he was an easy horse to fall in love with," said Malone, whose purchase was made in conjunction with Paul Nicholls.

"I hope he's as good as half of the pedigree. I've had great luck with Stowaway, who's his damsire, and she's a young mare related to two proper black type horses. Flemensfirth speaks for himself and he was a beautiful individual. He was really well bought as a foal by Will Kinsey."

Kinsey, for whom this was a first six-figure pinhooking success, was understandably thrilled.

When asked how he managed to unearth such a well-bred prospect for relatively run-of-the-mill money, he said: "He was late on at the foal sales, it was dark, it was raining and after the hammer came down I thought 'why has this lad only made €32,000?' because I absolutely loved him.

"He might've been a bit of a typical first foal but he came from a great home in Frank Motherway. It was actually Frank who recommended him to me, he's been one of the most straightforward horses to prepare. He really flourished like the good ones do.

"When I bought him I was trying to buy a foal with the possibility of making six figures. He was bought for an investment syndicate made up of clients and friends - most of them don't know one end of a horse from another!

"I thought being by that stallion and with that pedigree he had a chance of coming back and making six figures and he's rewarded the syndicate royally. Derek Smith is my head lad and he does a lot of the work at home so he deserves special mention. It's unbelievable really."

The Derby Sale concludes on Thursday with a session starting at 10.30am.

Celebrity Tattersalls Ireland Derby Sale graduates before they were famous

FIRST PUBLISHED 8:28PM, JUN 26 2019
When you're buying a store at that sort of money you have to think that they're capable of going to the very top