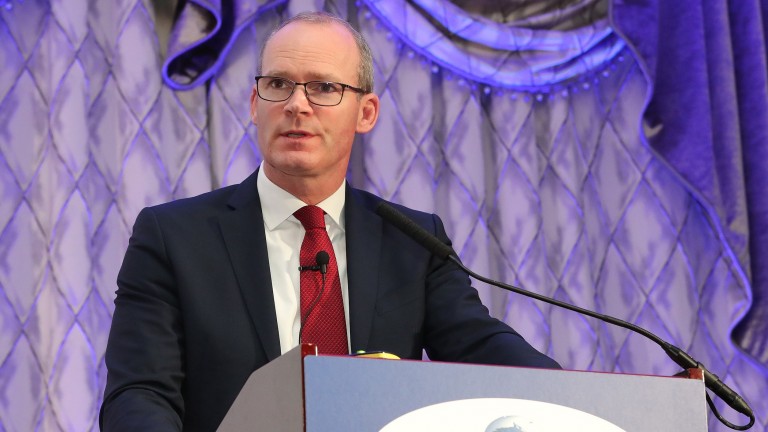 Tanaiste Simon Coveney has expressed the fear that racing isn't high on the agenda in Westminster's Brexit discussions but has sought to reassure the industry that it is a priority for the Irish government.

Coveney, the minister for foreign affairs and trade, was speaking at the ITBA's seminar in Kilkenny. He stressed that he didn't expect Britain to depart the European Union without a deal, but painted a pretty stark picture of the challenges that lie ahead up to March 29 and beyond due to the prevailing political and social climate in Britain.

"From my experience there are many people in the racing industry [in Britain] who are strong advocates for Brexit, and I just don't see the sense of that," he suggested. "I'm not even sure I've heard racing raised in the hours and hours of Brexit debates that I've heard in Westminster. Maybe it has been, but I'm not aware of it."

Asked if racing and breeding's message is being heard in Dublin and Brussels given the industry's 32-county nature and its exposure to Brexit implications, he responded: "Yes, it is being heard at many levels, but when you raise these issues with counterparts in the UK, in some cases it is almost like it's the first time they've heard the issue. Of course there is huge knowledge in the UK about racing and how it functions, but that doesn't necessarily mean their policy-makers are as plugged into it. We need the British government to be focused on the issue."

Coveney expressed the belief that Ireland and Britain won't end up in a trade war. He stressed that the two-year transition period allowed for in the withdrawal agreement was crucial to setting up effective and efficient border inspection posts.

Of protectionist policies that have been proposed for UK racing post-Brexit, he said: "Protectionism never works. It will fundamentally undermine their racing model. The industries in Britain and Ireland feed off each other, they make each other stronger.

"Keeping people out doesn't make you more competitive, it creates an artificial impression that you can continue to protect your own industry from the competitive forces outside your market forever, which you can't, of course.

"This is the delusion of people who are advocating strongly for a hard Brexit, that somehow Britain can leave, separate its economy entirely from the EU yet somehow continue to trade with Britain because the EU needs Britain as much as Britain needs the EU. I just think it's deluded thinking.

"Ireland certainly is exposed in a major way, but the rest of the European Union is nothing like as exposed to a no-deal Brexit as the United Kingdom is. That is why we need a sensible deal.

"There is no anti-British feeling from me. I am a product of the Anglo-Irish relationship in so many ways.

"The result Ireland wants from Brexit is the closest possible relationship with the UK, and between the EU and the UK, but there are some – a minority – both within the Conservative Party and also in Westminster generally, who are determined to drive a more aggressive form of Brexit, almost as if it's like cleansing the system of the EU. I think that is very dangerous thinking, for Ireland and for Britain.

"That's why I hope mainstream political thinking in Westminster between the two large parties will take control of this at some point and work with the Prime Minister to get a sensible deal. By the way, I believe [Theresa May] is our best chance of a sensible deal, despite the fact she has advised voting against the deal she negotiated herself. I still believe she is very serious about trying to protect the British-Irish relationship and the trading relationship between the two islands."

Of the delay in ratifying the withdrawal agreement, Coveney said that the Irish and EU stances were aligned in that the agreement is closed after "two years of a torturous process of negotiation".

He added: "What we have in the agreement is a delicate set of balances and compromises on both sides, and if you start changing that now by moving one or two elements that Westminster doesn't particularly like, it is essentially like asking your negotiating partner to remove the concessions that you've made, but to keep all the concessions that the other side has made.

"We're not accepting that, and nor is the EU. While the negotiating team from the British government is in Brussels today speaking to [EU negotiator] Michel Barnier, he will be making it very clear to them that we want to assist and give assurance around what's already in the withdrawal agreement. But what is not open for renegotiation is the actual text itself.

"Racing is a sector that is extremely exposed to the wrong outcome of these negotiations. The industry, in terms of its fundamental business model, relies on a seamless relationship between the UK, Ireland and France, but in particular Ireland and the UK.

"We need to continue to advocate for the racing industry to be managed on an all-island basis, and to ensure that animal health for horses continues to be managed on an all-island basis. We don't have agreement with the British government on that yet. We have raised this issue as a priority with the European Commission. We think this sector does need special treatment in relation to facilitating the movement of horses back and forth; east-west as well as north-south."

Coveney added of the consequences of a no-deal Brexit and the prospect of state aid policies for the thoroughbred industry: "The big difference between how Ireland copes in a no-deal Brexit scenario and how Britain copes, is that Ireland will have extraordinary solidarity with our EU partners.

"Everybody knows how exposed Irish agriculture and the thoroughbred sector is to a no-deal crash-out Brexit. [Irish EU Commissioner] Phil Hogan has made it very clear, in Brussels and in Dublin, that the EU will be there working with the Irish government in terms of support and compensation should that be needed.

"Certainly the Irish government will too. We are also having conversations with the European Commission in terms of state aid rules that would allow us to be supportive of sectors that are more vulnerable than others.

"I don't want to start promising funds, but what I will say is this is a really important sector and industry to Ireland. And the Irish government will try to protect you through a no-deal Brexit, should that happen, and we will have to put resources behind those words. My job is to make sure it never comes to that, and the job of the British Prime Minister is the same.

"We will work towards trying to find solutions that don't undermine the core Irish positions – or don't undermine the delicate balance of the withdrawal agreement that was negotiated – but at the same time tries to find a way of giving the reassurance that sensible and reasonable people in Westminster are looking for in relation to the content of the withdrawal agreement and the future relationship declaration; so that we don't have to face this potential madness of a no-deal Brexit, which would put so many sectors under so much strain.

"I think a deal can be done," he insisted. "It may take a little more time, but I think we will know an awful lot more in the next two to three weeks."