Michele MacDonald with a full rundown from the one-day auction 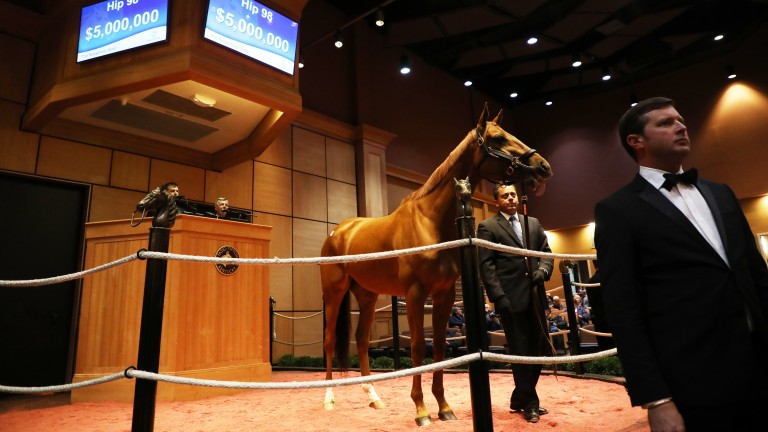 Like any man shot through the heart with the figurative arrow of love, Larry Best can remember the exact moment he fell for Breeders' Cup Distaff winner Blue Prize.

Best initially had no intention of buying the Argentine-bred daughter of Pure Prize, but he happened to be strolling the grounds at Fasig-Tipton's Newtown Paddocks in Lexington on Sunday when the six-year-old chestnut arrived after a long journey from her landmark victory at Santa Anita Park.

"I was walking on a beautiful sunny day, it was about three o'clock in the afternoon and this horse just got shipped in. She just looked so gorgeous - probably the most beautiful horse I've ever seen," Best declared after buying Blue Prize for $5 million to top Fasig's November Sale on Tuesday.

"She's a breathtaking horse - she's a horse easy to fall in love with," added Best. "It was an expensive love affair, but hopefully I'll have success breeding her and I think it was worthwhile risk, although obviously it was more money than anyone would want to pay.

"I now have a Breeders' Cup champion," he noted before adding with a laugh: "It may be the only way I ever get one."

Ignacio Correas IV, who trained Blue Prize to a trio of Grade 1 wins in America and earnings of $2,692,253, watched the mare he called "a horse of a lifetime" stand regally in the ring as bids volleyed across the pavilion and his emotions bubbled within him.

"There are not enough words to describe how thankful we are. Thanks, 'Blue,' it was an incredible ride, Loca," Correas wrote on Twitter, using the Spanish word meaning "crazy" to refer to the high-energy mare. "Will miss you!"

In their absence, the overall single-session sale results were down compared with the 2018 November auction, when European champion Lady Aurelia was sold for $7.5m to Stonestreet Stables, which bought out a partner for sole ownership.

Nonetheless, the 128 horses that sold for a total of $68.011m on Tuesday averaged an impressive $531,366, and 18 fillies and mares brought $1m or more, a result that Fasig-Tipton president Boyd Browning jnr called "just kind of mind-boggling."

So much of what transpires at the November Sale can depend on recent racing success, such as strong Breeders' Cup race results for fillies and mares, or decisions by owners to retain others and not send them through the ring as previously planned.

"You're thrilled when you get some updates like Blue Prize winning the Distaff," Browning said, noting that "the nature of this sale is that you get some of those tremendous updates and you sometimes have a loss like Midnight Bisou.

"I think we continued the tradition of the November Sale of having a wonderful marketplace for top-quality fillies and mares and foals and top weanlings. There was tremendous competition across the board from buyers around the world." 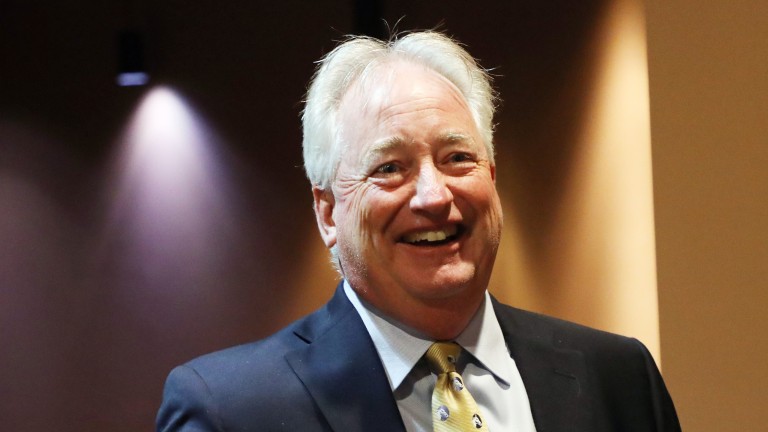 Best, who has been primarily known as a buyer of racing prospects, bought three weanlings along with the sale-topping Blue Prize, spending a total of $6.265m. He said he owns several broodmares that he boards with Taylor Made Farm, and he planned to seek advice on which stallion to choose as the first mate for Blue Prize.

His highest-priced weanling purchase was a $700,000 filly by Uncle Mo out of multiple Graded winner Summer Applause, by Harlan's Holiday.

That filly was the second highest-priced weanling sold, with a filly from the first crop of Horse of the Year Gun Runner out of multiple Grade 1 winner Love And Pride the leader at $750,000 when acquired by agent Mike Ryan for an undisclosed owner who intends to race her.

Yet even with his aggressive bidding, Best was outgunned at the auction in terms of total spending by Katsumi Yoshida, owner of Northern Farm in Japan. With his son, Shunsuke, overseeing a Northern team at the sale, Yoshida bought a total of six horses for a total of $7.7m, including one in the name of his Lake Villa Farm.

Topping the Yoshida purchases was the $2.7m Grade 1-winning Galileo mare Photo Call, who is carrying what will be her third foal to the cover of Quality Road after producing a 2018 filly by War Front and a 2019 colt by Uncle Mo for Teresa Viola Racing Stable.

Shunsuke Yoshida said the Irish-bred Photo Call - whose dam is a half sister to Irish 1,000 Guineas winner and Broodmare of the Year Halfway To Heaven, producer of multiple Group 1 winners Magical and Rhododendron - first enticed Northern Farm in 2015, when she was offered at Keeneland and sold to Viola and her husband, Vincent, for $3m.

"We bid on her but we weren't able to buy her," Yoshida said of the Keeneland auction. "This time we got lucky.

"She's not a big scopey horse, but to us she looks very athletic. She'll be a very a good broodmare," he said, adding that Photo Call, who currently is in foal to Quality Road, would be sent to Japan for a 2020 mating that has not yet been decided.

Yoshida's other high-profile purchases were multiple Grade 1 winner Vasilika, a five-year-old by Skipshot, for $1.5m, and Secret Spice, a four-year-old Grade 1 winner by Discreet Cat from the family of Canadian Horse of the Year Wonder Gadot, for $1.4m.

Wonder Gadot also will be heading to Japan after K I Farm successfully bid $2m for the four-year-old daughter of Medaglia D'Oro who defeated males in two of Canada's classic races, the Queen's Plate and the Prince of Wales Stakes.

"She has a good body and good race record and good pedigree—everything," said Tomoyuki Nakamura of K I Farm, which bred champion and sire Lord Kanaloa and also owns other Canadian champions Lexie Lou and Catch A Glimpse.

"(Wonder Gadot) will be shipped to Japan and be bred to Lord Kanaloa; that's why we bought her," he added. 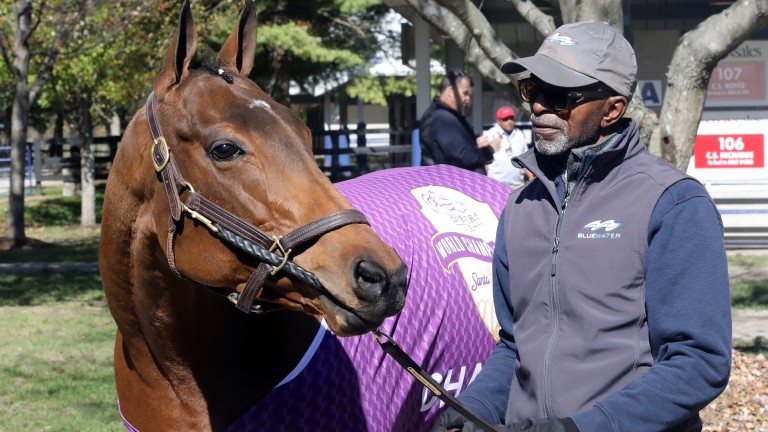 After securing Belvoir Bay, a six-year-old bred in Great Britain by the late Lennie Peacock, Shannon said the daughter of Equiano would be owned by a partnership still being formed. Belvoir Bay finished a good second to Godolphin's Blue Point in the Al Quoz Sprint in March and then ran her Breeders' Cup Turf Sprint male rivals off their feet when going wire-to-wire to victory in course record time of :54.83 for five furlongs.

"She's the fastest mare in the world," Shannon said, adding that he had followed Belvoir Bay's story after she famously survived the San Luis Rey Downs fire by galloping through the conflagration to safety while suffering serious burns on her legs.

Shamrock Rose, a four-year-old by First Dude who captured five of 15 starts and banked $968,962, was sold by Penny and Manfred Conrad's Conrad Farms, and they indicated the price exceeded their expectations.

Also among Fasig-Tipton's leading buyers was Stonestreet, with owner Barbara Banke overseeing the acquisition of four fillies and mares for a total of $4.79m. Topping the group was Grade 1 winner Mia Mischief, a four-year-old daughter of Into Mischief bought for $2.4m who will be kept in training with Steve Asmussen.

"That was our goal - mission accomplished," Banke said after Mia Mischief had been secured. Following another season of racing, Mia Mischief eventually will be bred to Stonestreet's Curlin, sire of Breeders' Cup Classic winner Vino Rosso.

"I think that is a very, very good nick and we hope to get stallion prospect," Banke said.

FIRST PUBLISHED 9:26AM, NOV 6 2019
It was an expensive love affair, but hopefully I'll have success breeding her and I think it was worthwhile risk