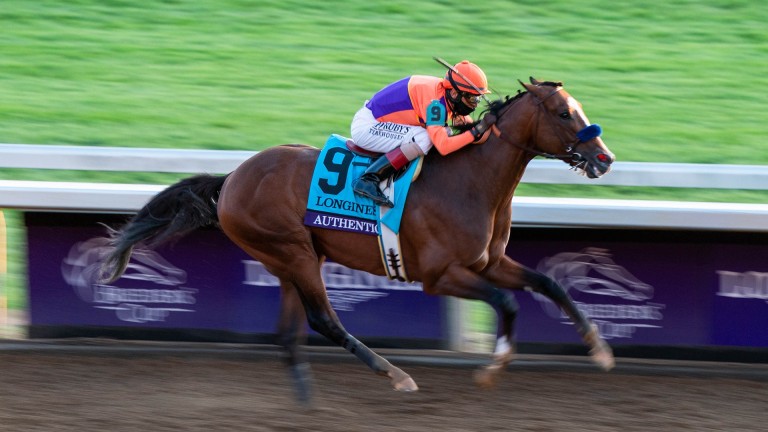 Authentic, who concluded a glittering 2020 with victory in Saturday's Breeders' Cup Classic, has been retired for a stallion career at Spendthrift Farm in Kentucky. He will stand for a fee of $75,000.

The operation of B Wayne Hughes had bought a majority interest in the colt back in June and he went on to land the Haskell Stakes and the Kentucky Derby for a group which included the popular MyRacehorse syndicate.

The son of Into Mischief was denied by a neck from following up in the Preakness Stakes by Swiss Skydiver and was completing a one-two for trainer Bob Baffert as he led home Improbable in Keeneland, finishing up as an earner of $6,191,200 with six wins from eight starts.

“Authentic is a once-in-a-lifetime kind of horse, and Mr Hughes is very proud that we are able to share him with 5,300-plus MyRacehorse owners through what has been an incredible run," said Spendthrift general manager Ned Toffey.

"That alone made this decision different and very difficult. Ultimately, we just felt there wasn’t a lot more to accomplish for a Kentucky Derby and Breeders’ Cup Classic winner, so we have made the decision to retire Authentic to stand alongside his champion sire Into Mischief.

"We believe in the sire line and feel Authentic is a big part of its future. It is very rare that you come across a three-year-old as well-bred, talented and accomplished as Authentic.

"We cannot wait to see his contributions to the breed, and we’re thrilled to continue his journey with all of the 5,300 MyRacehorse owners from the racetrack to the breeding shed."

The fourth foal of winning Mr Greeley mare Flawless, Authentic was sold for $350,000 as a yearling at Keeneland to his first owners, SF Bloodstock and Starlight Racing.

Authentic's dam, carrying a full-sibling to Breeders' Classic hero, up for sale

FIRST PUBLISHED 2:38PM, NOV 9 2020
We just felt there wasn’t a lot more to accomplish for a Kentucky Derby and Breeders’ Cup Classic winner