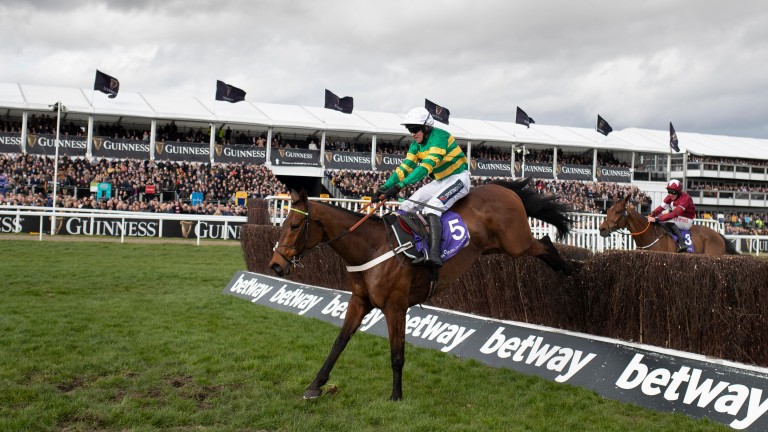 If ever a pedigree had been tailor-made for Cheltenham Festival victory, it is the one possessed by Champ. And, in a copybook case of blood will out, the Nicky Henderson-trained eight-year-old came with an irresistible late run to collar Minella Indo and Allaho in a thrilling finish to the RSA Insurance Novices' Chase on Wednesday.

Bred by Philip and Jane Myerscough, Champ is from the final crop of festival sire extraordinaire King's Theatre, who has now supplied 14 winners of 17 races at jumping's flagship meeting.

The son of Sadler's Wells, who was bred by Michael Poland, stood at Ballylinch Stud in County Kilkenny until his death at the age of 20 in 2011.

Champ is the first foal out of China Sky, a Definite Article half-sister to none other than Best Mate, who recorded a famous hat-trick in the Cheltenham Gold Cup between 2002 and 2004 for Henrietta Knight.

China Sky - bred by Myerscough from the Miller's Mate mare Katday, who he bought when her star son Best Mate was just a yearling - is also a half-sister to the high-class Cornish Rebel, a Grade 2-winning chaser who finished third to Trabolgan in the 2005 Royal & SunAlliance Chase, and the dual Grade 3-winning hurdler Inexorable.

She is also the dam of Drury, a three-time winner for Willie Mullins, and Track Mate, who was placed in an Irish point-to-point for Paul Cashman. China Sky also has an unraced four-year-old gelding by Fame And Glory, a three-year-old Presenting colt, a two-year-old son of Walk In The Park and in 2019 she visited Soldier Of Fortune.

Champ made one visit to the sales, where Aiden Murphy went to €40,000 to secure the well-bred youngster as a foal.

FIRST PUBLISHED 5:16PM, MAR 11 2020
Champ is the first foal out of China Sky, a Definite Article half-sister to none other than Best Mate