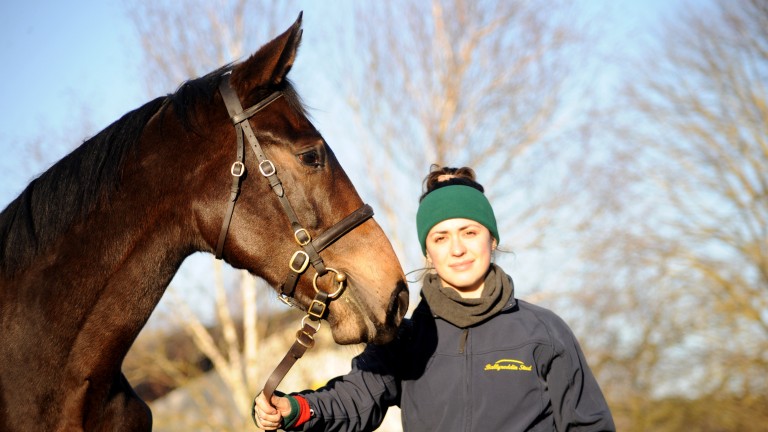 Blue was the colour of choice for buyers on the opening day of the Tattersalls Ireland November National Hunt Sale, which belatedly but happily began on Saturday.

Blue Bresil, who will shortly start his second season at Rathbarry Stud, had just two representatives on the opening day but both created a bidding frenzy.

For the second successive year, John Dwan sold the yearling session-topper with his family’s Ballyreddin Stud consigning the Blue Bresil gelding who made €80,000.

Lot 32 is the third foal out of the Flemensfirth mare Wild Blueberry, and the irresistible combination of sires with the imposing gelding in the ring prompted bids from around the ring and outside.

Eventually it was Michael Moore of Ballincurrig House Stud who brought the hammer down for the bay, whose second dam is a full sister to the Grade 2 Bula Hurdle winner and Grade 1 third Valiramix and a half-sister to De Valira, winner of the Grade 2 Future
Champions Novice Hurdle.

"He was the standout horse in the section," said Moore. "Blue Bresil is a very popular sire and is getting nice horses so hopefully he will continue to be successful and the plan is to bring him back here for resale at the Derby Sale."

His large price tag will surely heighten interest in his year younger full sister who is catalogued as here on Monday from Mountain View Stud in Tipperary. 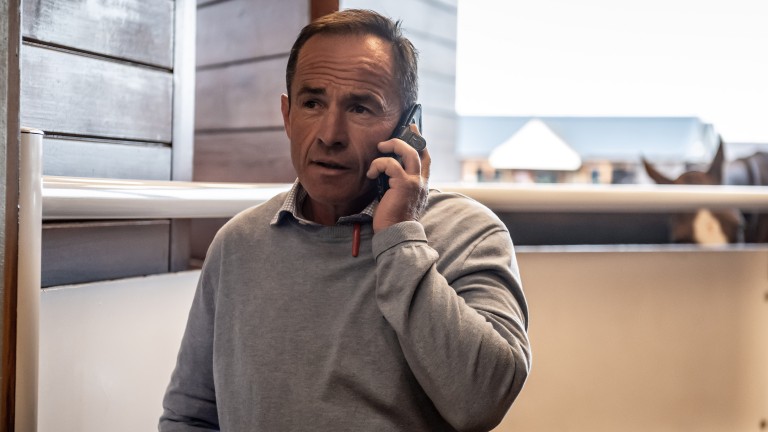 Moore’s operation turned consignor with what was set to be the highest-priced filly foal; the only foal by Blue Bresil in the session proved to be enormously popular with the big-striding and strong filly bringing €40,000 from Ferndale Stables.

She is the first foal out of Little Miss Poet, a daughter of Yeats who was second in the Listed Mares’ Handicap Chase Series Final at Cheltenham for Philip Hobbs.

Timmy Hillman of Castledillon Stud was in the mood for spending on the choicest foals and a Getaway colt headed to the top of the standings after he endured a tense battle for the full brother to Colin Tizzard’s exciting novice chaser The Big Breakaway.

Hillman went to €85,000 to secure the big-striding colt, also a half-brother to Ben Pauling's smart Kildisart.

Lot 204 was consigned by Spikle Stud and is out of the Blueprint mare Princess Mairead, who is a half-sister to the dam of Rathvinden. It is also the family of Paul Nolan’s Grade 1 Golden Cygnet and Navan Novice Hurdle winner Latest Exhibition.

Earlier, Hillman also signed for a colt from the first crop of Gold Cup and Irish St Leger winner Order Of St George for €68,000. 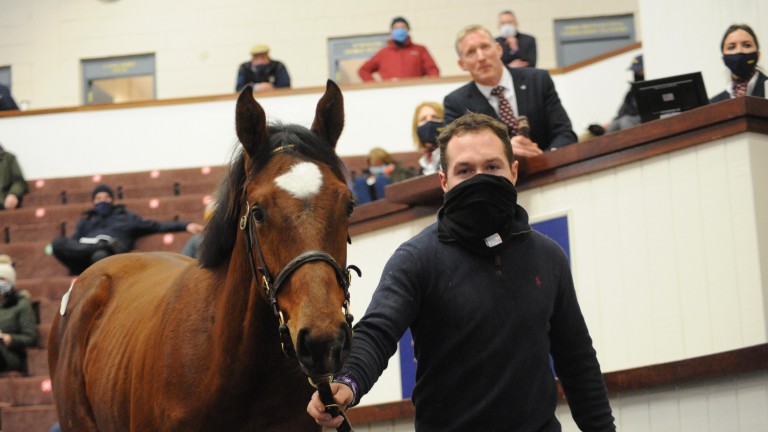 An Order Of St George colt made a big impression on Timmy Hillman in making €68,000
Tattersalls Ireland/Healy Racing

The foal has an interesting pedigree; he is inbred to Sadler’s Wells as he is out of Mile From The Moon, a Beat Hollow three-parts sister to Grade 2 Peter Marsh Chase winner The Dutchman, Listed scorer Katie Too and The Pirate’s Queen, who also won a Listed mares’ hurdle and was third in the Grade 2 Persian War Novices' Hurdle.

Second dam Shivermetimbers was an accomplished chaser, winning the Grade 3 Dawn Run Novice Chase but has excelled herself as a broodmare.

"It’s a lovely page, and Beat Hollow is having success as a broodmare sire so there's plenty to look forward to there."

He added: "The Getaway is a really good looking foal who moves well and is out of a proven mare that has already produced a really good horse. Both of them will be back here for the Derby Sale."

Both Getaway and Order Of St George were in demand with buyers on Saturday, with the younger stallion posting consistently good results. Ten of his first crop of foals were offered for sale with a 100 per cent clearance rate and an average of €27,150.

As well as the colt out of Mile From The Moon, Caroline Berry also sold an Order Of St George colt to Mark Dwyer’s Oaks Farm for €30,000. Lot 136 is a half-brother to the Listed-placed mares Shantewe and Step To The Top out of a Dr Massini half-sister to the
Grade 3-winning hurdler and Triumph Hurdle second Chief Yeoman. 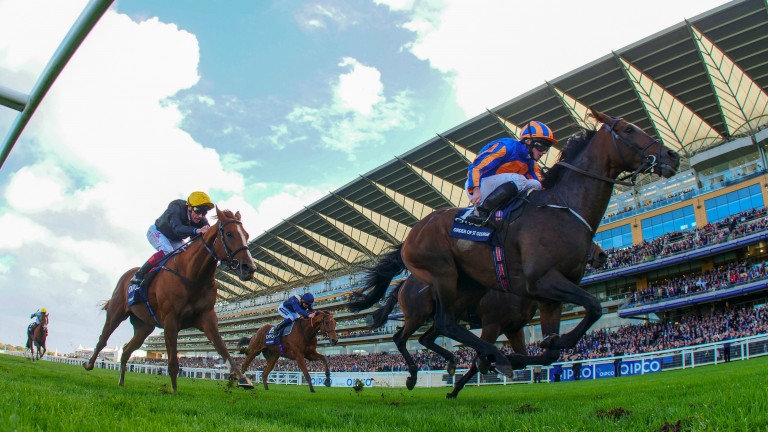 Cleaboy Stud offered an Order Of St George colt out of Presence d’Esprit, a winning half-sister to Quel Esprit, successful in the Hennessy Gold Cup at Leopardstown for Willie Mullins, and to the dam of talented hurdler Aux Ptits Soins. Lot 216 fell to the combined forces of Rathmore Stud and Inch Bloodstock for €44,000.

Joey Logan reinvested some of the enormous profit he earned at the Tattersalls Cheltenham Sale on Thursday in an Order Of St George filly. Logan sold Grangeclare West - an impressive winner of his maiden at Lingstown for Jamie Codd and Denis Murphy - to Cheveley Park at Newmarket for £430,000 having purchased him for €62,000 at the Tattersalls Ireland Derby Sale last year.

His purchase on Saturday cost half of what Grangeclare West did as a store, and comes with a lovely page. Her dam has a perfect record with her three runners, who include the Grade 2-placed Redhotfillypeppers. Consigned by the O’Connor family’s Lough Na Sollis Stud, she is out of a half-sister to the dam of Gold Cup runner-up On His Own.

Another high-class foal set for a return visit to the Fairyhouse sales ring is a Soldier Of Fortune colt with a heavy black-type pedigree.

Consigned by Robert McCarthy’s The Beeches Stud, where the Irish Derby and Coronation Cup winner stands, he brought a winning bid of €52,000 from the familiar buying duo of Kevin Ross and Ben Case.

He is the third foal out of Winged Empress – a Winged Love daughter of Shirley Casper, who won the Grade 2 Future Champions Bumper and was third in the Grade 1 bumper at Punchestown.

Also successful in a Grade 3 Mares’ novice hurdle at Fairyhouse, the
Presenting mare is a full sister to Kerry National winner Wrath Of Titans and a half-sister to Thunder And Roses, who won the Irish Grand National.

Another of her half-siblings is the Listed-winning mare Oilgarch Society, who is the dam of Grade 3 novice chase winner
Brahma Bull.

"He is a lovely, scopey foal with a great outlook,” said Ross who signed for the April-born colt. “He is by a very good sire and from a really good National Hunt family. He is for Lady Jane Grosvenor and hopefully he will be back here for the Derby sale in a few years."

With the sale halved from its usual six day format, direct comparisons with previous years are not accurate. However the clearance rate of 75 per cent reflected the strong demand for
foals throughout the day, and was a massive increase on the 64 per cent recorded on the opening day of the 2019 sale.

The average was also up slightly on day one of the 2019 sale, showing a gain of three points to €12,526. Turnover was down on last year but with a substantially reduced catalogue that was to be expected. The drop in turnover was much less than the reduction in numbers, with the final figure down just 16 per cent from 30 per cent fewer horses offered.