Filly is owned and bred by Haras de la Perelle 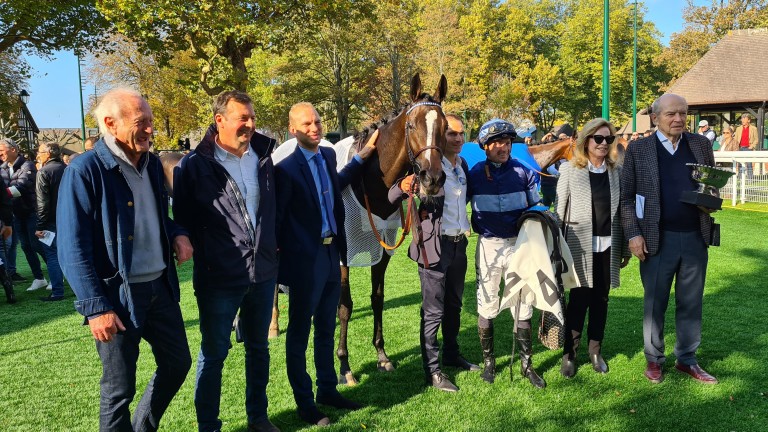 Momentum for German bloodlines, and those belonging to Gestut Auenquelle in particular, continued at Deauville on Tuesday with the impressive performance from Rosacea in the Group 3 Prix des Reservoirs.

Earlier this month, the Auenquelle-owned Torquator Tasso caused a sensational result in the Prix de l'Arc de Triomphe, while this latest arrival is sired by its totemic resident Soldier Hollow.

Progeny of the multiple Group 1 winner are often thought to develop with age, such as his most recognisable top-level scorers Dschingis Secret and Pastorius, so the development of Rosacea at this stage suggests she could be regarded as a possible Classic prospect.

Owned and bred by Jurgen Winter's nearby Haras de la Perelle, Rosacea is out of Relizar, a winning Zamindar mare who is more significantly a half-sister to the stud's brilliant Coronation Stakes runner-up and EP Taylor Stakes winner Reggane.

Rosacea has jumped through the grades in winning her last three starts and swept right through the field in the closing stages to score a little cheekily under Theo Bachelot.

Trainer Stephane Wattel said: "I'm delighted because she is from breeders that have been very important for me and who have supported me throughout my career.

"She has always done everything very well and showed all the right signs in the morning. I think it was a very good field today and I said beforehand the winner would have a big future, so I won't change my mind now. That will be it for the year.

"She has a real turn of foot even though she was quite keen in the first half of the race, and so I think she is pretty good. "

FIRST PUBLISHED 4:24PM, OCT 19 2021
I'm delighted because she is from breeders that have been very important for me and who have supported me throughout my career