Bloodstock Latest A STAR IS BORN

Monte Solaro was due to foal at the beginning of May 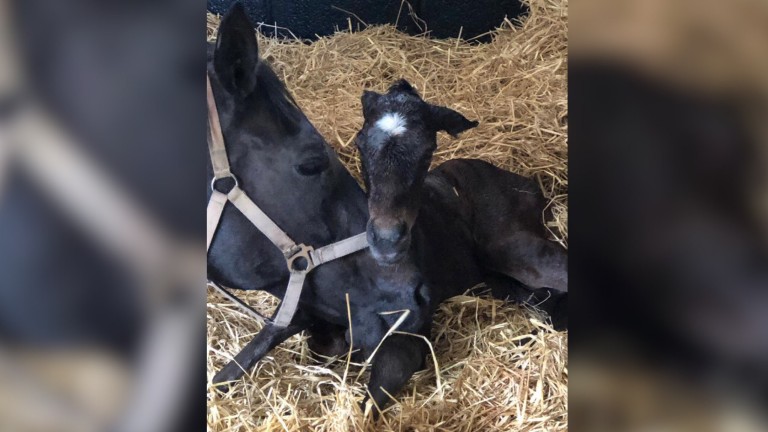 The Key Of Luck mare, who had been due to foal down as early as the beginning of May, was cared for during her foaling by Mark and Barbara Dreeling and has produced four winners to date led by her awesome son Altior.

The nine-year-old son of High Chaparral set a new record for most consecutive wins over jumps after posting a 19th back-to-back success, and 20th overall, in the Grade 1 Celebration Chase at the end-of-season meeting at Sandown in April.

"We're all absolutely delighted with her colt foal," said Paddy Behan jnr, whose father bred the superstar chaser. "He was let out into the field this morning and is a healthy looking foal, who looks like a racehorse in the making.

"He has a smashing head, with a star on his forehead, while Mark and Barbara Dreeling - who are very good friends of ours - looked after the foaling. Both mare and foal are perfect."

Monte Solaro was bred and raced by the Behan family, for whom she earned black type at Tralee, and has also produced the Grade B handicap hurdle scorer Princess Leya to Old Vic. Her Milan daughter Melior was, like Monte Solaro, raced by the Behans and has joined her mother at stud.

A regular concubine for Coolmore's National Hunt stallions, Monte Solaro's now four-year-old Milan gelding set a new Derby Sale record when hammered down for €365,000 last June, while she also has a two-year-old Walk In The Park filly.

Camelot has made his mark in the jumps sphere with the ill-fated Sir Erec leading home a one-two for the sire in the Grade 1 Spring Juvenile Hurdle at Leopardstown in February, with Gardens Of Babylon in second.

Altior was also crowned leading chaser at this year's annual ITBA awards, while the Racing Post cameras visited Monte Solaro and the Behan family in January this year, a clip of which can be viewed below.

Terrific Tuesday for Altior's dam as she delivers filly foal

Altior: by the man who knows him best

FIRST PUBLISHED 1:14PM, JUN 17 2019
Her Camelot colt has a smashing head, with a star on his forehead. Both mare and foal are perfect