Ollie O'Donoghue reports on day two of the August Sale 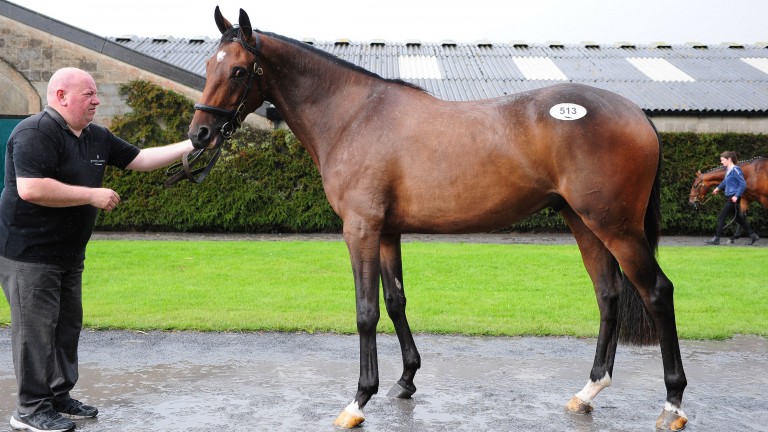 The top lot was the Milan gelding out of the Presenting mare Knotted Midge, and he shares both his parents with Beat That.

He is also a half-brother to the four-time Grade 1 winner Might Bite, whose trophy haul includes the King George VI Chase at Kempton and the RSA Novices' Chase at the Cheltenham Festival.

"The dam has already bred two champions," called auctioneer Alastair Pim as he tried to elicit another bid, before bringing his gavel down at €52,000 in favour of trainer Pat Flynn.

"You can't beat breeding," said Flynn, who was standing on the upper level. "We loved the horse - he's very nice and has a good pedigree.

"We've had winners at the Cheltenham Festival before and hopefully he'll get us back there."

The name of the Waterford-based trainer appears twice on the Supreme Novices' Hurdle roll of honour, with Montelado (1993) and French Ballerina (1998), while Montelado was also successful in the first running of the Champion Bumper at Cheltenham in 1992. 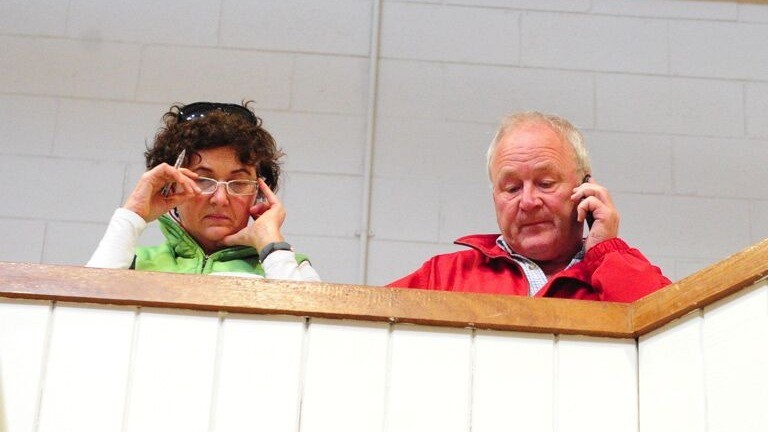 A Court Cave full-brother to the ill-fated Grade 1 Neptune Novices' Hurdle winner Willoughby Court ensured a buzz around the Fairyhouse sales ring earlier in the session.

Two parties were particularly keen to get their hands on the May-foaled gelding, who was offered by Boardsmill Stud on behalf of breeder Jack Kidd from Enfield.

The bidding skipped upwards in increments of €2,000 and €3,000, with only agents Gerry Griffin and Gerry Hogan left to fight it out once the bidding rose past the €30,000 mark.

From his position on the upper level opposite the rostrum, Hogan was taking his instructions on the phone from prominent owner Barry Connell and a final bid of €45,000 was enough to seal the deal.

"He was a nice horse with an extremely good pedigree," said Hogan. "Barry Connell will train him and he's been lucky with the sire."

Connell, who plans to take out his own training licence, has also campaigned the Court Cave gelding Speaker Connolly, a two-time winner who was third to Whisperinthebreeze in a Grade A handicap chase at Leopardstown in February, though he was sadly fatally injured at Wexford in April. 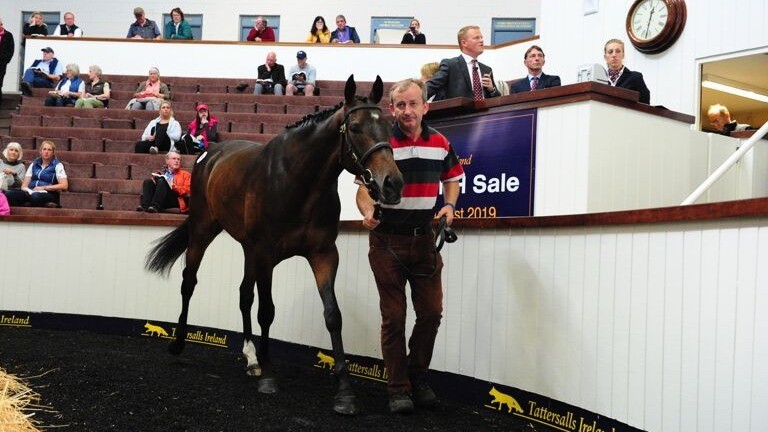 Shortly after Might Bite's half-brother was led out of the ring, there was another flurry of bids, this time for the Ask half-brother to Ministerforsport, who took third behind subsequent Cheltenham Festival winners A Plus Tard and Duc Des Genievres in a Naas beginner's chase last December.

Offered by Walshtown Stables on behalf of Jeremiah and Gerald O'Donovan, the chestnut gelding was knocked down to Matt Coleman for €44,000.

"He's a big, scopey beautiful mover and has been bought to go racing in Britain," said Coleman, whose business partner Anthony Stroud purchased the Cheltenham specialist Another Coral, who appears under the fourth dam.

Gerry Griffin was not to be denied earlier in the session when stretching to €30,000 for Windmill Stables' Rock Of Gibraltar half-brother to the Sandringham Handicap third Touchline.

Like Touchline, many of the gelding's relatives were bred and raced on the Flat by the Queen, including Group winners Fabricate and Phantom Gold and stakes scorers Daphne and Momentary, though he does share his second dam with the 2008 Scottish Champion Hurdle hero Border Castle.

"He's a sharp, racey type and should be a nice horse for bumpers," noted Griffin, who said his purchase would go into training with Nicky Richards, with whom he also sourced Baywing and Simply Ned at the August Sale.

Regular attendees at the Tattersalls Ascot and Cheltenham sales will have recognised a familiar face on the rostrum this week, with Matt Hall auctioneering for the first time at Fairyhouse.

Hall has wielded his gavel at Ascot and Cheltenham for the past three years and explained there was a lot of crossover between the auction venues on both sides of the Irish Sea.

"It's been a great opportunity and privilege," said Hall. "It's always been an ambition of mine to auctioneer here.

"It's a fantastic sales ring with great acoustics and everything happens around you. Like all sales rings, it takes a bit of getting used to, but I'm enjoying the experience.

"The store sales that take place here complement the Cheltenham sales quite well as the point-to-point handlers stock up for next season.

"I love auctioneering at both Ascot and Cheltenham. Ascot is close to my heart as that's where I started, and there's always a great buzz at Cheltenham, as they are the premier sales for point-to-point and National Hunt form horses." 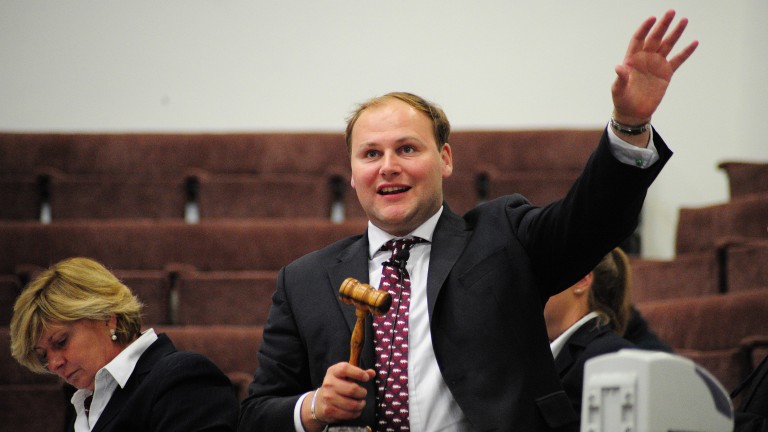 Despite a marked decline in the average of 17 per cent, a stat which fell to €7,430, the median held strong at €5,350, which represented only a two per cent decline compared to 12 months ago.

Good second on debut in a Dawstown maiden and sold for £45,000 at Cheltenham to trainer John McConnell, for whom he has won eight races including a Grade 3 novice hurdle at Thurles and a Listed novices' hurdle at Perth during the 2018-19 season

"He was an athletic type by Stowaway, who was a popular sire at the time," said Colin Motherway.

"I bought him from Margaret Brophy, who also bred the Hatton's Grace Hurdle winner Voler La Vedette. He was a very sharp, racey type and it's been great to see him go on and win Graded races. It's been a big boost for me starting out as a trainer." 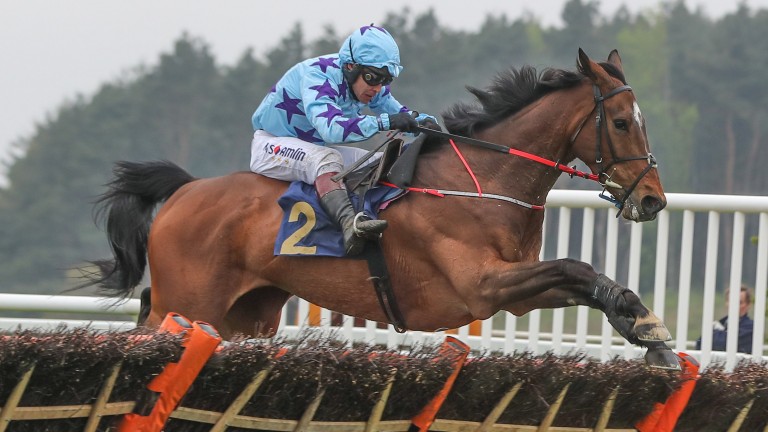 Go Another One in winning form at Perth
Grossick Photography

FIRST PUBLISHED 3:31PM, AUG 14 2019
We've had winners at the Cheltenham Festival before and hopefully he'll get us back there