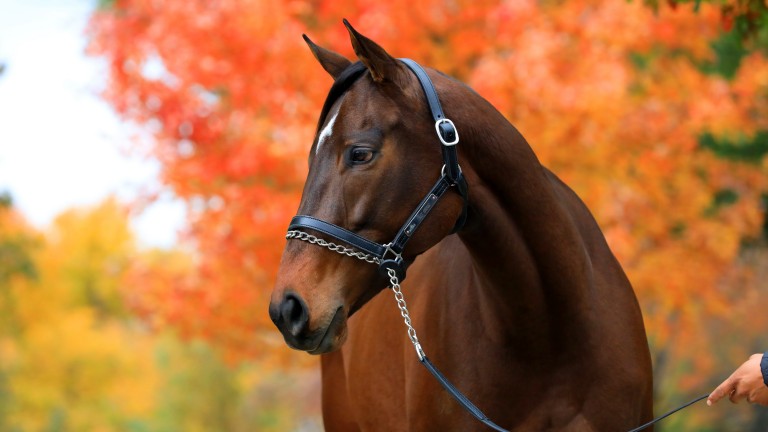 As one of the world’s foremost breeders, Barbara Banke decided she just couldn’t part with the special champion she said has given her the "most fun I’ve ever had in horse racing," and now that filly, Lady Aurelia, could start a new European chapter for Banke’s Stonestreet Farms.

After securing Lady Aurelia, who Banke bred and raced with partners, for $7.5 million to top Fasig-Tipton’s November sale on Sunday, Banke said the daughter of Scat Daddy could be sent to Europe to be bred next season.

“I haven’t bred horses in Europe before. This would be a first if I do,” Banke said, noting that there are a number of stallions who could be good mates for Lady Aurelia, the Cartier champion juvenile filly of 2016 after victories in the Queen Mary Stakes at Royal Ascot and the Prix Morny over colts.

If a European-based stallion is chosen for Lady Aurelia, that could lead to more Stonestreet participation internationally.

“We’ve raced a few over there and plan to do it again. It really is a global business,” Banke added.

With Lady Aurelia’s brilliant turn of foot, Banke said Coolmore’s proven strategy of blending American speed with the more stamina-oriented pedigrees found in Europe could be an ideal formula.

“Yes, absolutely. Take American speed and breed it to something that’s going to stay the distance – that could be our philosophy too,” she said.

If Lady Aurelia remains in America for breeding, she could visit Stonestreet-raced two-time Horse of the Year Curlin, who won the Breeders’ Cup Classic and the Dubai World Cup, although Banke also mentioned Curlin’s champion son Good Magic, who will stand his first season in 2019 after being bred and co-owned by Stonestreet, as a possibility.

When the hammer fell and she learned that Lady Aurelia, who became the first American-trained horse honoured as a Cartier champion in Europe, would be returning to the Stonestreet broodmare band, Banke said a sense of relief flooded through her.

The Stonestreet team had instructed Fasig-Tipton president Boyd Browning jnr to sign the ticket for the filly at a certain level, but the dizzying bidding that opened at $2m initially left Banke unsure of the outcome.

“I was wondering at the end if I did have her. I was relieved to tell you the truth,” she related. “I am [happy], and now we’re looking forward to her next plans and hopefully a champion or two.”

Banke indicated that her limit for Lady Aurelia was higher than the final bid, and she had the advantage of her dollars stretching further than any other bidder since she already was a co-owner.

Banke also said she had previously purchased the interest in Lady Aurelia that had been owned by former partner George Bolton, although Peter Leidel had remained as a co-owner.

Part of the reason why Lady Aurelia had been entered in the sale was so that Leidel’s value could be maximised, Banke said when she hosted a media party at Stonestreet in September to celebrate Lady Aurelia’s racing achievements.

“It’s hard to come up with something that good,” Banke said after Lady Aurelia had trotted out of the Fasig-Tipton ring.

FIRST PUBLISHED 3:41AM, NOV 5 2018
Take American speed and breed it to something that?s going to stay the distance ? that could be our philosophy too