Bloodstock Latest VIEW FROM THE GROUND 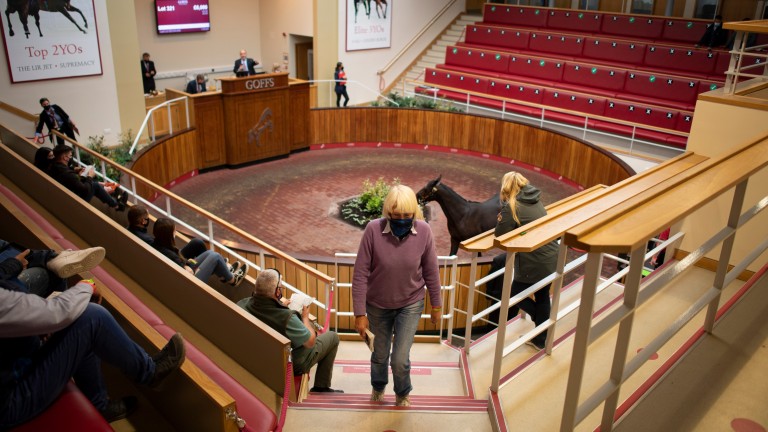 Kildare Paddocks' famous auditorium may remain empty, but you need only look through the Goffs Orby Sale's recent roll of honour to see why the Doncaster sales complex was a hive of activity on Tuesday ahead of the relocated two-day auction.

This year alone has seen the likes of Art Power, Cadillac, Galileo Chrome, Gear Up, Lucky Vega, Manuela De Vega and Raging Bull land major prizes having been offered at the Orby Sale.

In a normal year the Orby Sale would be Ireland's flagship yearling auction, but the comforting routine of sales seasons past now feels a distant memory as key events have been held out of place, in terms of timing and location.

Although face coverings and social distancing may still feel somewhat alien in the sales ring, a sense of order is restored by the Orby catalogue, which features 474 well-credentialed yearlings, among which are some distinctly familiar pedigrees.

The deepest catalogues invariably draw the biggest buyers, and teams from Coolmore and Godolphin were both busy scrutinising lots in the Doncaster sunshine on Tuesday. Also on hand were the likes of Shadwell's Angus Gold, Juddmonte's racing manager Teddy Grimthorpe, John Gosden and Qatar Racing's chief talent scout David Redvers.

Among the standouts on offer are the Dubawi colt out of a stakes-winning daughter of Albanova (lot 17), the Galileo filly out of dual Group 2 scorer Banimpire (42), a Footstepsinthesand half-sister to Irish Oaks heroine Even So (57), and the Sea The Stars filly out of Green Room (176).

Also due to come under the hammer is a Sea The Stars filly out of a half-sister to the brilliant Golden Horn (172), a Dark Angel colt out of the Irish 1,000 Guineas victress Jet Setting (211) and a Kingman half-brother to the Group 1-winning Miss Yoda (291). That trio will all be offered by Baroda Stud.

"There's been a great flow of people over the last few days and that's continued into today," said the operation's David Cox. "We just have to hope that traffic equates to money being spent in the sales ring."

A cursory glance through the Baroda draft explains why so many prospective purchasers flocked to barn D to inspect the stud's 24-strong offering, as Cox said: "We've yearlings by all the right sires - Kingman, Frankel, Galileo - and some exciting younger stallions like New Bay, who's made a great start, and Caravaggio. I think we've got some good firepower." 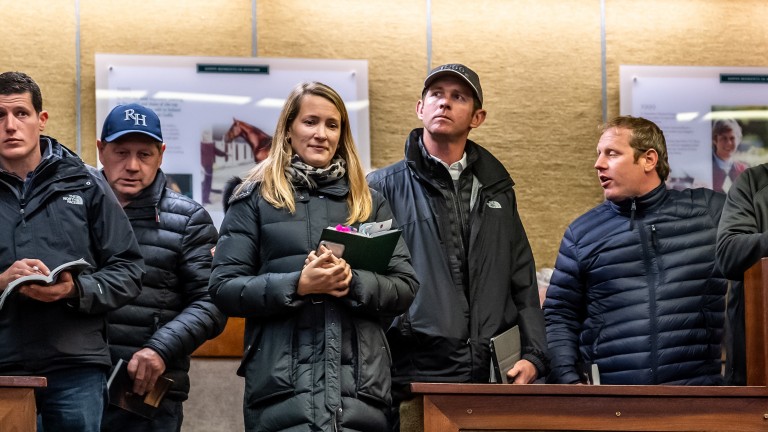 David Cox (second right): "We're very lucky that sales are going on with what's happening in the world"
Sarah Farnsworth
On the Dark Angel colt out of Jet Setting, Cox said: "He was bred on the farm by China Horse Club and he's a lovely solid horse. He's a good mover and has a great temperament, he's always been a very straightforward horse and it's exciting to be selling one out of a 1,000 Guineas winner."

Cox also noted the industry-wide efforts that have gone into getting the Orby Sale to this stage. He said: "We're very lucky that sales are going on with what's happening in the world. Between vendors, buyers and Goffs, everyone's done their best to make it happen. Clearance rates have been pretty good so far so hopefully that can follow through into these next few weeks."

At the opposite end of barn D, Irish National Stud chief executive Cathal Beale was overseeing the operation's seven-strong draft. In between shows, Beale reported a positive vibe on the sales ground.

He said: "There's a good atmosphere around the place and all the people you'd expect to be at an Orby Sale are here. In fairness to Goffs they've done a super job as they've got everyone over here safely, the procedures in place are excellent and everyone feels safe.

"If you'd have offered me this position in April, I'd have bitten your hand off. We all know the market won't be as vibrant as it has been in recent years, but there is a market here and one thing's for sure, there are a lot of nice horses here. There are going to be plenty of stakes winners sold in the next two days."

On his expectations for the two days of selling, Beale said: "They haven't been quite as high as they might have been in previous years, but there's lots of activity at the moment with inspections and vettings so we're cautiously optimistic.

"Vendors are a resilient bunch of people and I think we've all adjusted to the new normal. We're just grateful to the teams at Goffs and ITM who have helped get this on and to the buyers who are here looking, because the alternative is unthinkable." 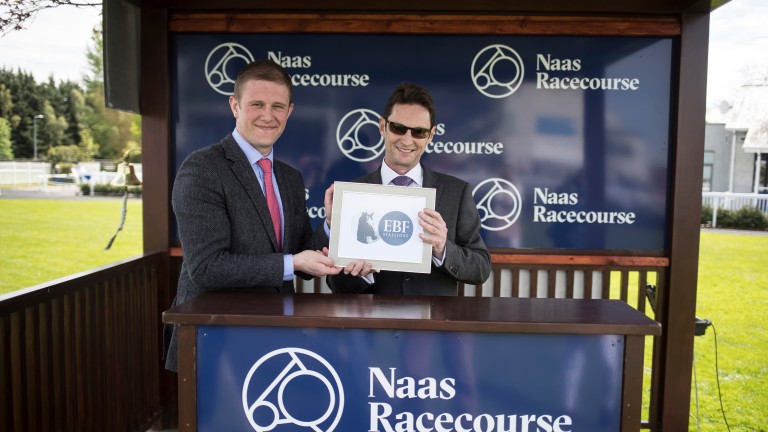 Cathal Beale (left): "If you'd have offered me this position in April, I'd have bitten your hand off"
Patrick McCann
Kicking off the Irish National Stud's draft is the Invincible Spirit colt out of Aimhirgin Lass (12), a winning Pivotal sibling to the Listed scorer Seeharn and the Group 3-winning Yellow Rosebud.

Beale said: "He's a real Irish National Stud homebred as he's by Invincible Spirit and out of Aimhirgin Lass, who we raced in the colours of the president. He's a beautiful colt and we're hopeful he'll go well."

The stud also offers two lots from the debut crop of its resident stallion Decorated Knight, with colts out of Katch Me Katie (220) and Neuquen (307).

"The Decorated Knights are going down well," said Beale. "It's exciting for us to be selling the first crop of yearlings by a champion son of Galileo. We're excited to see how they go this week and at Tattersalls as he's got some beautiful stock on the ground."

Goffs group chief executive Henry Beeby echoed the sentiments expressed by Cox and Beale as he offered a pragmatic prediction on the upcoming sessions.

He said: "We've got some beautiful horses here, the lots we're going to present are a really strong bunch and there seems to be a lot of interest. That said, we know we're in a very difficult time in the world.

"Economies are in a lot of difficulty and racing is facing its own challenges, so we're under no illusions that trade is probably going to be quite selective. The metric that will probably be the most revealing is the clearance rate. If we can return a respectable clearance rate I think we'll be happy."

Vendors and buyers alike seemed unanimous in thinking that switching the Orby to Doncaster was the right course of action, though Beeby stressed it was not a move the Goffs team took lightly.

"It breaks our heart to move what is the Irish national yearling sale out of Ireland," he said. "We hoped against hope that we'd be able to hold the sale in Ireland but once we couldn't get overseas people into the Land Rover Sale we really started having to think about moving the Orby to Doncaster. 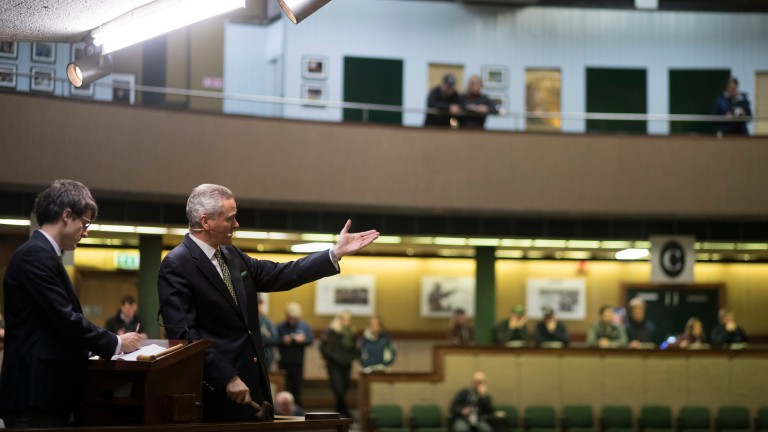 Henry Beeby on the Goffs rostrum during the 2017 Orby Sale
Patrick McCann
"From a personal point of view, I'm very proud that we're able to bring the Orby Sale to Doncaster. This sales complex was developed before Doncaster Bloodstock Sales' merger with Goffs and if ever there was a time of the place coming of age, its hosting one of the world's leading yearling sales."

Beeby also added his voice to the chorus of appreciation for those whose efforts may have gone unseen despite being vital in the smooth running of a sales season unlike any other.

"I have to pay tribute to the vendors for their flexibility and understanding," he said. "There was a bit of debate beforehand, but now we're here people have been very pragmatic and helpful. Doncaster council have been very helpful in working with us on our protocols, and the interests of Tattersalls and Goffs have never been more aligned.

FIRST PUBLISHED 5:41PM, SEP 29 2020
To be honest, it breaks our heart to move what is the Irish national yearling sale out of Ireland