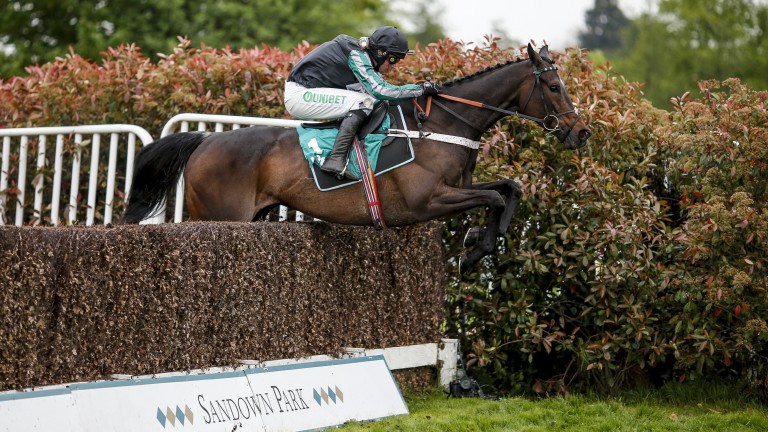 Temperatures may not have broken any records yet during Ireland’s heatwave but at a sweltering Tattersalls Ireland Derby Sale on Thursday, the record for the most expensive store horse ever sold in Ireland came tumbling down courtesy of a relative to superstar Altior.

From the moment the sales company released the catalogue, amid a galaxy stars, one horse stood out. That was John Dwan’s Milan three-parts brother to the Champion Chase winner and if the individual matched the page, fireworks were guaranteed.

The beautiful gelding certainly did that and he had buyers with deep pockets lining up to view him. When it came to the appointed moment on Thursday night, in front of a packed sales ring, led by Roxanne Soltys, the gelding did not disappoint.

When the serious bidding started, Margaret O’Toole with Eddie O’Leary of Gigginstown House Stud, Ian Ferguson and Aiden Murphy were those in the hunt for the prize and as the final moves played out, Murphy held the winning hand at €365,000.

“I bought him for MV Magnier, who loves the sire and has been supporting the market over the last couple of days,” said the agent. “Altior is an outstanding horse and being a close brother to him, if he could be half as good, it would be fantastic. The mare has proven herself as an excellent producer and he had everything.”

Murphy had earlier bought a son of Fame And Glory on Magnier’s behalf for €100,000 and Magnier has been busy over the course of the sale, picking up a beautifully bred Flemensfirth filly from Liss House Stud for €140,000 and geldings by Stowaway and Kayf Tara for €130,000 and €125,000 respectively.

Like his illustrious sibling, the sale topper was bred by Tom Behan from Killenard, County Laois out of his only mare at the time, Monte Solaro, although he has subsequently retained a Milan filly out of her. John Dwan purchased the record-breaker at the Tattersalls Ireland November Foal Sale from Timogue Stud for €40,000.

In the light of the late evening sun, and accepting congratulations from delighted well-wishers, Dwan reflected on his place in Irish bloodstock history.

“I was hopeful that he would make a very good price as he had developed into a fine horse over the years since I bought him," said Dwan. "He has the benefit of Altior on his page so it all fell together very well.”

The horse more than lived up to expectations at the sales, helped in no small part by his unflappable temperament, which was on display as he calmly circled the sales ring as the bids rained down.

“He did it very well every time he was asked to show and he is a grand, big relaxed horse with a huge presence. I wish his new owners all the very best with him and I hope he is lucky for him," Dwan said.

Dwan is no stranger to success in either the sales ring or on the track, and he bred last year’s Grand National hero One For Arthur, like his record-breaking pinhook a son of Milan who stands at Grange Stud, part of Coolmore’s National Hunt division.

“I’ve had a lot of luck with Milan as a both a breeder and as a purchaser of his stock,” he added.

Tattersalls Ireland seemed to save the best for last as the final hour of trading on Thursday night brought a flurry of high prices amid some frenzied buying with Aiden Murphy in the thick of things.

A few minutes before his purchase of Altior’s three-parts brother, the agent won out in another battle with Margaret O’Toole, standing with Eddie O’Leary on that occasion as well, for a Martaline gelding offered by Ballincurrig House Stud.

Out of the Trempolino mare Mille Et Une, who was Listed-placed over jumps in her native France, the bay gelding fetched €240,000 from Murphy and will go into training with his son Olly for an existing client.

Of his purchase, Murphy senior said: “He is an exceptional horse by a very good French sire and with a perfect pedigree.”

That pedigree includes his dam’s full-brother Madox, a seven-time winner in France who was placed 20 times and his third dam, also Listed-placed over hurdles and the dam of four black type winners.

Bred by Martin Lightbody’s Netherfield House in Scotland, the gelding was bought by Michael Moore of Ballincurrig House at the same sale as the Milan sale-topper from Goldford Stud.

Four horses prior to that, Murphy struck for the first of his three late big money purchases – and another French bred gelding at that.

Consigned by Walter Connors from his Sluggara Farm, Murphy went to €200,000 to secure the son of No Risk At All, who stands alongside Martaline at Haras du Montaigue.

The third produce of his dam, who has an impeccable record with her two runners so far, he is a half-brother to Vision Des Flos, who was placed in Grade 1 novice hurdles at this year’s Aintree and Punchestown Festivals.

Their dam is a half-brother to Henry De Bromhead’s Balko Des Flos, who won the Ryanair Chase and the Galway Plate last season and was second in the Lexus Chase and to Salut Flos, trained by David Pipe and also a Cheltenham Festival winner. Further back it is the family of German Derby winner All My Dreams.

As with the Martaline gelding, he will be trained by Olly Murphy.

“He is for an English client,” said Murphy senior. “I bought his half-brother last year and he has come out and won his bumper.”

That half-brother is Umndeni trained by Philip Hobbs, who was sold last year by Connors’ Sluggara Farm to Murphy for €175,000 and won on his only start, at Warwick in late April.

FIRST PUBLISHED 9:35PM, JUN 28 2018
Altior is an outstanding horse and being a close brother to him, if he could be half as good, it would be fantastic

All change: Altior straight to Cheltenham as Henderson reveals shock Champ move Nicky Henderson aiming stars at Newbury - even if meeting is rescheduled