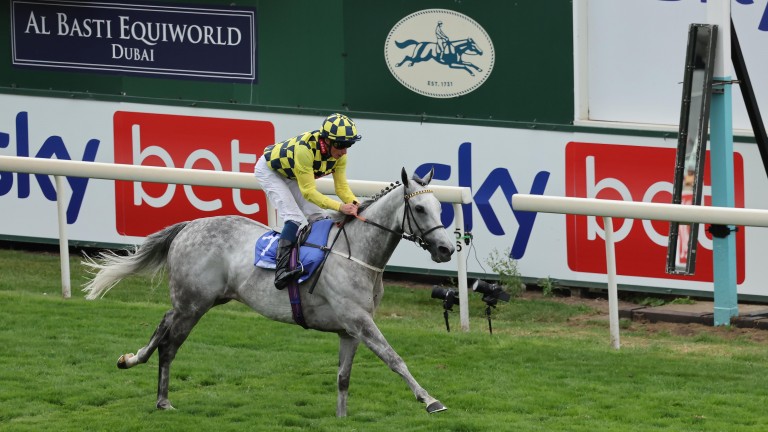 Alfred Boucher opened the Ebor meeting with an impressive win
John Grossick (racingpost.com/photos)
1 of 1
By Tom Peacock 10:15AM, SEP 24 2022

There have been bonuses from Alfred Boucher from even before he was born, which explains the cheerful disposition with which his owner-breeder Robert Allcock has dealt with both victory and defeat.

The progressive grey stayer ran away with a handicap on the first day of the York Ebor meeting and was picked off by Trawlerman under a 4lb penalty in its eponymous feature on the last. He returns to the track in Saturday’s Deepbridge Watergate Cup at Chester in an outing which could tee up further exciting challenges in the new year.

Allcock, who spent 17 years as an assistant trainer to John Dunlop, harked back to another chapter of his apprenticeship when it came to finding Alfred Boucher’s dam Policy Term, picked up for €21,000 from the February Sale at Goffs in 2015 with a mating plan already decided. 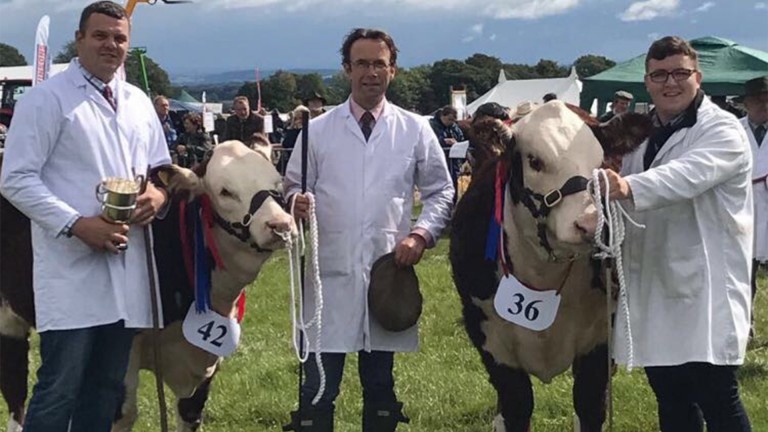 Best in show: Robert Allcock (centre) with his Hereford cattle and friends and advisers Ben Fairgrieve (left) and Twm Jones

"I’d used several stallions at Lanwades and I was given the nomination to Aussie Rules and went out and bought the dam," he says.

"To be honest, having been given that nomination, I still wanted to just find a mare with a good family. About 35 years ago I worked for Hamish Alexander; one of his great claims to fame was that he pinhooked [Derby winner] Generous. He did a lot of the Cliveden Stud families, I knew them well and was quite pleased to get into them."

Among Policy Term’s ancestors are the Park Hill winner Madame Dubois, hence the Classic winners Indian Haven and Kite Wood, and Allcock says it continues to return to fashion.

"The third dam is [1973 Cheshire Oaks winner and Epsom fourth] Milly Moss and Policy Term is an Authorized mare," he says. "Another Authorized mare with the same third dam produced Top Ranked, by Dark Angel, who won a Group 3 at Randwick over seven furlongs at the weekend.

"It’s bringing them back, they’re live families. When they’re as solid as those Cliveden ones, you can always get those updates."

Allcock seems to have an optimistic outlook in any case, an attitude which lends itself well to the travails of the small-scale owner-breeder.

Regardless, his current band of three broodmares each bring positive assets to the table and he was forward-thinking enough to have bought a nomination to the high-flying Havana Grey to give them a commercial slant.

"I was pinhooking for a few years but I left to buy the farm in Shropshire and I’ve gone more to breeding," he says.

"I sold Policy Term’s Advertise colt as a yearling, I’ve no idea to this day why he made only 25,000gns but he’s gone to a good trainer in Martyn Meade and that’s fantastic when you’re a breeder.

"She’s now got a Golden Horn filly foal at foot and now she’s in foal to Havana Grey. I have another mare, Baharah, who is a dual Listed winner and a half-sister to [Prix de l’Opera winner] Nahrain, the dam of Benbatl, and also a half-sister to In Dubai, the dam of Go Bears Go.

"I’ve got a Study Of Man colt out of her and she’s in foal to Havana Grey. Feis Ceoil, my other mare, she’s got a Havana Grey foal at foot and is in foal to Dream Ahead."

Alfred Boucher is the sort of slow-developing staying handicapper that Allcock’s old boss would surely have excelled with too. Reliable through shorter distances in the first part of his career with Henry Candy, the gelding has switched up to longer trips after arriving at Williams' yard in the spring.

"I was at Arundel from '89 to 2006 so that was through Salsabil, Erhaab, Shadayid, Bahri, Millenary, Silver Patriarch - there were enough of them," he recalls.

"I think the first day of Ascot in 1995 we had four runners, three winners and a second. It’s so amazing how racing has changed. In 2001 we were the biggest in Europe with 210 horses on the books. These days, with 210 you’d probably be about fifth or sixth, wouldn’t you?

"I always felt I wanted to work in a racing yard to have more of an idea, to understand a little bit more about what makes a horse tick and also the problems they have. 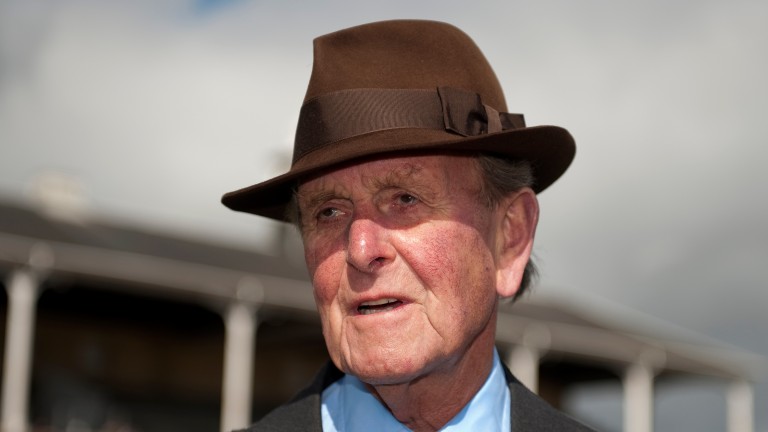 Now, aside from sending the mares away to foal, he operates his farm near Shrewsbury with the only help a day or so a week from a couple of friends. The horses are joined by a herd of prize-winning Hereford cattle, which have symbiotic benefits.

"They’ve got such great temperaments, so it’s not only good pasture management running them behind the horses, but they’re so quiet as well," says Allcock.

"Last year some little time after weaning a filly foal became an acute and extreme boxwalker. I moved her into a pen with five Hereford heifer calves and she settled. A month later she and a six-month-old heifer calf moved into a stable which they shared for the winter and went out into a paddock together daily. The filly no longer boxwalks and she goes into training with Ian later this year."

Allcock concedes that the late Aussie Rules, a French Guineas winner in his time, was never a great commercial hit as a stallion for all that he has produced decent runners.

It is why he understood when Alfred Boucher was not accepted for the fancier auctions and decided to keep him himself.

"A horse like him is kind of one in a million, the extraordinary improvement he has made this year," he says.

"He was the first foal, if I’d sold him as a yearling he wouldn’t have made much money, which doesn’t help you. 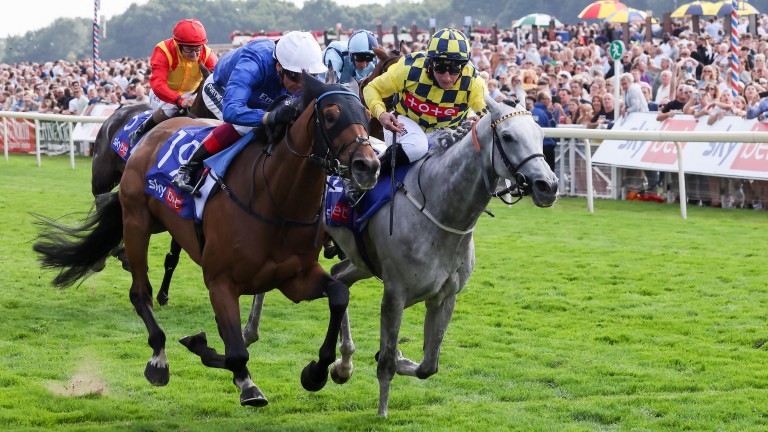 "I loved him when he was a baby, rated him as a yearling; he had the most beautiful action and glided across the paddock, no knee action whatsoever, which is why he needs that good ground.

"Normally he spends the winters home with me, and that's just wonderful in itself. Having bought into a family like that and for a good horse like him to come out as the first one, it’s exciting when you can kind of rejuvenate those families."

Unfortunately for a son of Aussie Rules, this year will not include a start in the Melbourne Cup and connections are viewing this weekend’s handicap over an extended two and a quarter miles as another step in his progress.

Allcock says: "We gave it consideration. Melbourne is the most amazing race, but it’s an awfully long way to go and for the moment, there are other options. He’s only six, there’s still a chance another year.

"Saturday is going to be interesting. He hadn’t run over two miles until he went to Chester in June, which isn’t really the true two miles, but then he won over two miles at York.

"You can’t find the ideal race so easily, so sometimes you have to just hit slightly into the unknown, which is what we’re doing.

"Ian is planning to take him out to Dubai for the Carnival in the spring. I think after this we’ll probably go a bit quiet on him for the year. He needs good ground, we’re going to lose that anyway, and Ian thinks there’s also a race in Saudi that suits him."

A repetition of the consistency that Alfred Boucher has already shown in a few lucrative prizes could mean that Allcock will not have to fret about funding his nominations for a little while longer.

Catch up with a few Bloodstock Big Reads

FIRST PUBLISHED 4:00PM, SEP 23 2022
You can’t find the ideal race so easily, so sometimes you have to just hit slightly into the unknown, which is what we’re doing