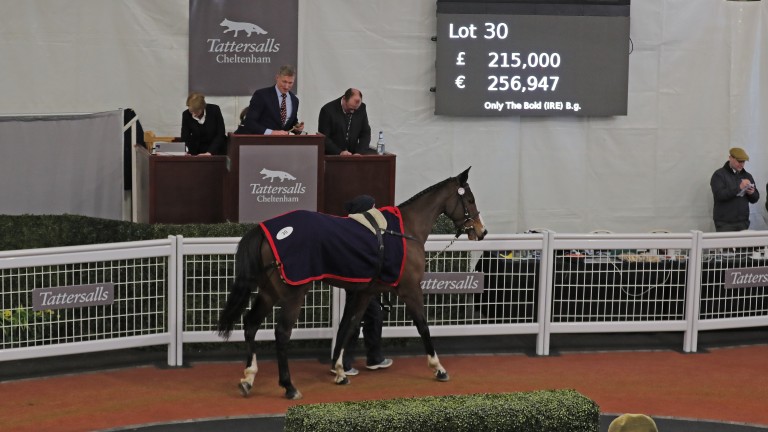 Warren Ewing hailed Only The Bold as "as good a horse as I've had" after the Tyrella maiden winner topped the Tattersalls February Cheltenham Sale on Friday when knocked down to Evan Williams for £215,000.

The five-year-old son of Jeremy provided the master of Bernice Stables with a tidy profit too, as he had been picked up for €46,000 at the 2018 Goffs Land Rover Sale.

"I'm delighted," said Ewing. "I think this is an exceptionally good horse - I think he's as good a horse as I've had. He's a special horse and you'd expect to be seeing him back here next year.

"He's always pleased me in everything he's done and it's very hard to do what he did on that ground at Tyrella."

Only The Bold, whose siblings include the Grade 2 winner Westerner Lady, made two starts for Ewing, and made up for a mid-race unseat on debut by scoring by nine lengths on his second outing in late January.

His sale-topping exploits once again underlined the popularity of Jeremy, who died aged just 11 and with his National Hunt stud career very much in the ascendancy. Ewing said of the former Garryrichard Stud resident: "Jeremy was just getting going when I bought a few of them. He was a very good sire, he's a big loss to the National Hunt industry." 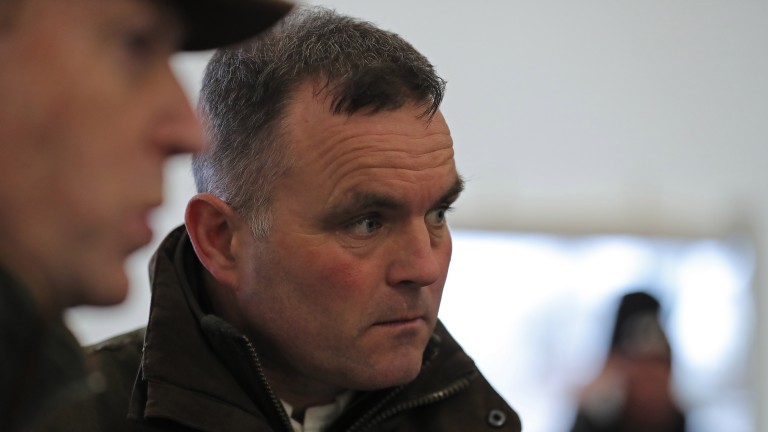 Evan Williams: "With all due respect, that's not big money for a winning pointer in this day and age"
Debbie Burt

For Williams, this purchase was a case of returning to the source of success, having purchased the smart two-time winner Bold Plan from Ewing at the 2018 February Sale.

"We've been lucky with a couple from Warren in the past," said the trainer, before adding with a wry smile: "We've been unlucky as well mind!"

He continued: "We had a horse called Bold Plan, who's also by Jeremy, from him before, and he was a handy little horse on his day so we thought we'd have another go. This lad wasn't the biggest horse in the world but he's very correct and I'd say Jeremy is a good sire - he's greatly missed because he gets so many winners."

The sale-topping sum of £215,000 fell some way short of the prices routinely seen at boutique National Hunt sales, with last year's February Sale topped by the £410,000 Wide Receiver, while the ill-fated Flemenshill brought a record price for a point-to-pointer when fetching £480,000 in 2017.

When asked if he felt Only The Bold's price represented good value, Williams said: "What's big money these days? With all due respect, that's not big money for a winning pointer in this day and age. Mr and Mrs Rucker have bought this horse, and they also bought the horse by Imperial Monarch [the £140,000 Star Gate] earlier in the day too."

Mullins and Kirk go for a Brandy

Brandy Love created a big impression when the four-year-old filly beat the boys to land a Cragmore maiden earlier in the month, and the daughter of Jet Away will now head to Willie Mullins' stables to continue her racing career after Harold Kirk saw off Tom Malone with a bid of £200,000.

"We always buy fillies as there's a great programme for them in England and Ireland now," said Kirk, who stood beside Mullins during the bidding. "She's a brilliant jumper, a fabulous jumper, so hopefully she'll jump fences one day. She showed a lot of class against the geldings.

"I didn't think we'd have to give that much for her, but, to me, she's the best racehorse here today. Hopefully she'll be back here running in the fillies' chase!"

Brandy Love was making her second appearance at public auction, having been signed for by Maria Byrne at just €15,000 at last year's Goffs Land Rover Sale. She becomes by far the most expensive offspring of Arctic Tack Stud's Jet Away, who fielded two winners from two runners within an hour last Saturday.

"The sire's had two runners and two winners so far, so you can't really knock that," added Kirk. "She's got a good fillies pedigree too, there's Seskin Bridge further back in the pedigree, she was a fantastic racemare and the dam [the useful Bambootcha] was a good racemare too. She ticks a lot of boxes." 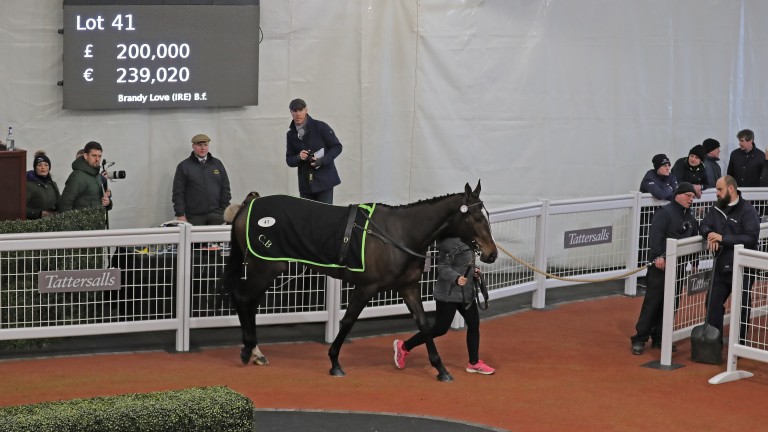 Brandy Love was offered by Colin Bowe's Milestone Stables, who topped the consignors list having sold four lots for a combined £590,000.

Jet Away's other winner, Supreme Jet, was also offered on Friday, but went unsold at £95,000 when offered by Moulisha Stables. However, the horse he beat at Oldtown went on to fetch £170,000 from Highflyer Bloodstock's Tessa Greatrex and will head into training with Ben Pauling.

"He's been bought to fill an order I've had for a while," said Pauling. "He looks a particularly nice horse and he was well thought of. I think the horse who beat him probably got first run on the field, so Guardino was left trying to do the donkey work of reeling the leader in on very heavy ground. He probably ended up doing well to get as close as he did.

"We'll get him home and see how he is, there'll be no mad rush to get him out as he's a horse for next year really." 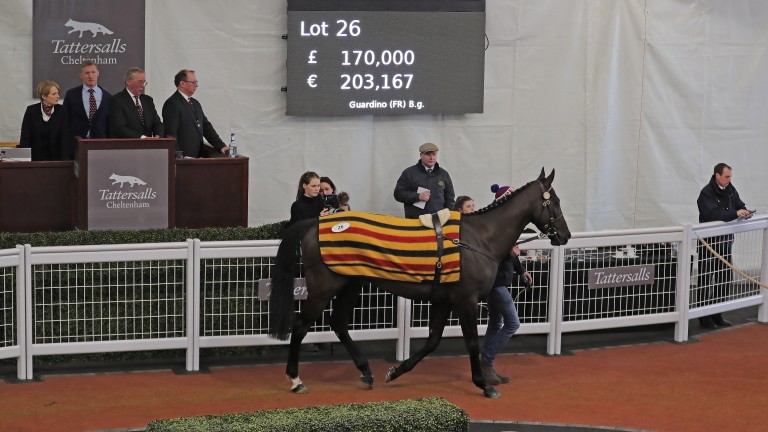 The four-year-old son of Authorized was offered by Denis Murphy's Ballyboy Stables, having been signed for by Murphy and Colin Bowe at €74,000 at last year's Goffs Land Rover Sale.

"He's a very nice horse and a great looker," said Murphy. "He came from the Land Rover; he was a great mover then and still is. I was surprised when he was beaten but the winner got a big lead and on heavy ground they just couldn't peg him back. He could end up being a very good horse."

Gordon Elliott, who was in town to see his dual Grand National hero Tiger Roll schooling over Cheltenham's cross country fences, added to his string when going to £155,000 for Tallow maiden winner Glenglass, another to be offered by Milestone Stables.

The son of Ocovango produced an eye-catching debut effort when coming home a length clear, despite his sizeable frame making him seem an ideal candidate to favour a more galloping track.

"He's a lovely horse who probably shouldn't have been able to do what he did around a tightish track given his size" said Elliott's long-time ally Aidan 'Mouse' O'Ryan.

"He's a horse for next year, obviously, he'll be a proper chaser in time. There's no need to rush him, he's already proved he's got an engine, and with a summer at grass he should be a lovely horse."

Glenglass, a €42,000 Tattersalls Ireland Derby Sale pinhook, is from the first four-year-old crop of Beeches Stud sire Ocovango, of whom O'Ryan said: "The stallion seems to be doing well too, everyone who has one seems to like them so he's got every chance. We've got a couple of four-year-olds by him we like."

By the time the last of 40 offered lots had left the ring, 30 horses had sold for a clearance rate of 75 per cent.

Matt Prior, head of Cheltenham Sales said: "This sale has produced two of the most exciting horses this season in Envoi Allen and Asterion Forlonge. As a result of this, we welcomed a large selection of Irish and UK trainers and agents which produced solid demand.

"We now look forward to the Cheltenham Festival where we will host our next sale after racing on Thursday, March 12, as well as cheering on our many graduates who hold leading chances for the week."

How new five-year welfare strategy could affect the bloodstock industry

FIRST PUBLISHED 5:39PM, FEB 21 2020
He's a special horse and you'd expect to be seeing him back here next year