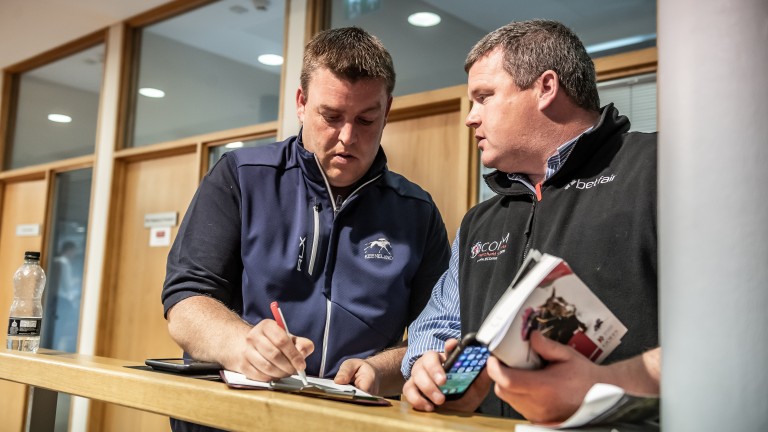 Gordon Elliott and Aidan 'Mouse' O'Ryan got the better of a marathon auction ring arm wrestle with Charlie Swan and AP McCoy that saw the promising hurdler Grand Roi top the Goffs UK Summer Sale at £400,000 on Wednesday.

The fluent-moving son of Spanish Moon achieved an official rating of 140 for bloodless successes at Fakenham and Warwick, and with just four starts for Nicky Henderson and the Million In Mind Partnership still possesses any amount of untapped potential.

"I could go on about this horse all day," said auctioneer George Stanners as the four-year-old took to the Doncaster sales ring. "But he's going to do the talking on the track."

Tom Malone and an unidentified online participant made the early running until, at £130,0000, Swan, a key figure in JP McManus's buying team, joined in and raised five fingers to signal the first of many £5,000 increases.

A rare £10,000 raise saw Swan push the price to £200,000, but no sooner had the online bidder been seen off than Elliott and O'Ryan, stationed in the bidders' area opposite the rostrum, entered the fray.

The rivals traded almost exclusively £5,000 increases from that point on, with Swan, standing with McCoy, who was taking instructions on the phone, positioned on the top tier of the auditorium to the right of the rostrum.

Stanners was in fine form conducting proceedings, and as it became clear the opposing bidders were in it for the long haul he quipped: "Will someone get me a cup of tea?" before he added: "I wish your teachers had taught you to count in tens!" 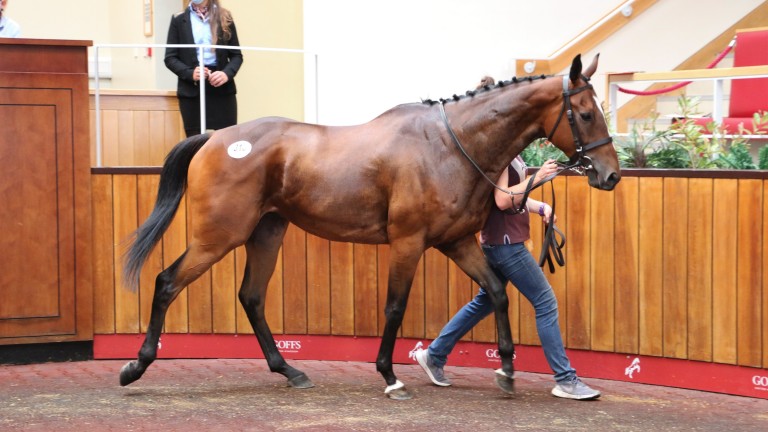 Grand Roi strides around the Doncaster sales ring
Claudia Claydon
The auditorium bristled at each £50,000 milestone but every five-finger gesture from Swan was swiftly met by Elliott, who continued to mouth "five" in Stanners' direction until a final £10,000 raise proved decisive.

"He looks a very good horse, he looks a Graded winner in all but name," said O'Ryan after a good-natured debrief between the rival camps. "You need those horses if you want to compete at the top. You have to pay for those horses though and that's the type of money they're making."

Grand Roi was offered as part of the annual Million In Mind dispersal, and Elliott will be hoping the progressive youngster can add his name to a roll of honour that includes the likes of Garde Champetre, Le Prezien, Top Ville Ben, Uxizandre and Voy Por Ustedes.

"The Million In Mind syndicate have sold loads of good horses before; David Minton and Anthony Bromley are very transparent about the whole thing and couldn't be more helpful," said O'Ryan.

Gordon Elliott and Aidan ‘Mouse’ O’Ryan get the better of Charlie Swan at £400,000 to secure the exciting Grand Roi at the @GoffsUK Summer Sale pic.twitter.com/ebTCf2LXRj

The agent went on to give a successful bidder's perspective on such a lengthy sales ring tussle. He said: "You know you're going to have to pay big money for them. You have to set a value in your head and you have to value the client's money too, you can't just go rounding figures up, that'd be ridiculous and just an abuse of power really. You're trying to get the horse as cheap as you can for the owner."

O'Ryan was unable to reveal whose silks Grand Roi will be carrying, but said: "He's for an existing owner who already has a few horses in the yard. I'd imagine he'll stay over hurdles for the time being as there's a very good hurdle programme for four-year-olds in Ireland. We'll see how we get on but hopefully he's going right to the top."

All six Million In Mind horses were offered without reserve, and the draft duly brought receipts totalling £555,500, with Henry Hogarth going to £46,000 for Archie Brown and Elliott and O'Ryan striking at £35,000 for the useful Timoteo.

'It's great for the game'

Reflecting on the sales ring success of Grand Roi, David Minton, who runs the syndicate with his Highflyer Bloodstock colleague Anthony Bromley, said: "He deserved to make a good bit of money and when you get two camps like that taking each other on it's a great spectacle.

"It's great for the game and given the way things are at the moment it's fantastic to see that horses can still make that sort of money."

With the wider economic situation looking particularly fragile after the global pandemic, Minton said the Highflyer team had discussed sourcing fewer than the usual six horses for the next Million In Mind squad, but suspected they would remain at regular levels after Grand Roi's fruitful sale. 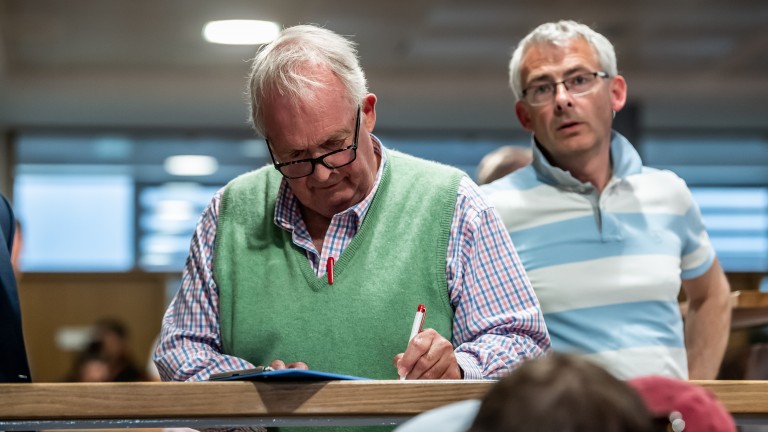 David Minton and Anthony Bromley of Highflyer Bloodstock who run the Million In Mind Partnership
Sarah Farnsworth
"There's already three new horses at home and Bromley's bound to get stuck in now that he's got a bit of money to play with!" he said. "We were thinking of cutting down on numbers a little but there's no reason we can't get another three now.

"We like to buy value for money and we wouldn't spend six figures on sourcing each of these horses but we seem to consistently produce a biggie. Nicky said there was some untapped potential there [in Grand Roi], obviously he's a bit disappointed but it's just one of those things."

The top lot was the only offering to bring six figures on Wednesday, but Willie O'Doherty of Ash Hill House still enjoyed a fine result when he sold five-year-old pointer Fabrique En France to Olly and Aiden Murphy for £82,000.

The French-bred son of Yeats was pinhooked by O'Doherty for €18,000 at the Goffs Land Rover Sale and has gone on to advertise his talents with a third-place finish on debut at Stowlin before an eyecatching second at Ballycahane last time out in March.

"He's been a bit unlucky in his point-to-points; he got bumped into on debut and still finished third and on his last run he was left with an awful lot to do, he was 20 lengths behind turning in but only got beat three lengths in the end," said a delighted O'Doherty. "He's a lovely horse from a lovely family."

The trainer explained that Fabrique En France, whose dam is out of a sister to Cyborgo and Hors La Loi III, was making a belated reappearance at public auction after the cancellation of point-to-points in Ireland scuppered his earlier plans.

"It's been difficult with him because when he was second in Ballycahane, Jamie Codd got off and said he'd made a mistake," said O'Doherty. "At that point I had him booked for the Cheltenham Festival Sale but Jamie said to hold on to him because he'll win next time, then lockdown started and all the racing was cancelled." 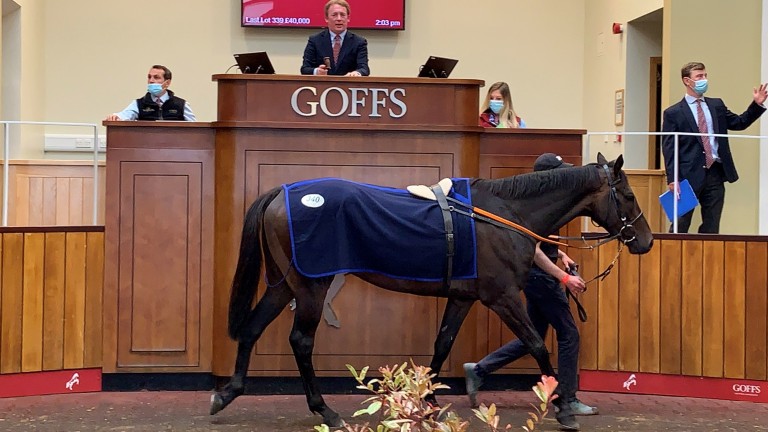 Fabrique En France brings £82,000 from Olly Murphy
Claudia Claydon
He continued: "The horse that beat him, Killer Kane, went to that sale and made £300,000 so it would've been nice to have come into the ring an hour later. But I'm very happy with what he made today, though he was well worth it. He's been very popular here and I hope he's very lucky for his new owner."

While the likes of Colin Bowe and Donnchadh Doyle have carved out successful careers preparing Irish point-to-pointers, O'Doherty, whose past graduates include bumper winner Le Cheval Noir, explained his day job was as an architectural design technician.

"I'm just a small-time trainer," he said. "I buy three-year-olds, break them and try and sell them on. I train around eight pointers in Ballingarry in County Limerick and ride out before work. This job wouldn't pay full time, but if I had more horses like this one it would!"

Olly Murphy said of his purchase: "He saw his race out well last time and obviously the winner made a lot of money. He cost a fair price and I thought he looked a nice type for bumpers. He's been bought for an existing client with some familiar colours."

The £82,000 mark was hit for a second time later in the session when Sky Pirate was knocked down to Jeremy Mactaggart. The Goffs UK director explained the son of Midnight Legend had been secured on behalf of the Wasdell Group and would be returning to Jonjo O'Neill's Jackdaws Castle.

Day three of the Summer Sale began with the August Store Session, during which 56 stores were offered, with 37 sold for a clearance rate of 70 per cent.

The priciest of those was the very first horse into the ring, with Mel Smith going to £22,000 for the Manduro gelding consigned by Elms Stud.

"He's for a new client of mine and he's going to go to Richard Hawker," said Smith. "He's got some nice horses and is expanding his yard and I'm delighted to have secured this horse for him.

"Of course, with losing Manduro we won't be seeing very many more of his progeny coming through. The dam was a decent mare too and, of course, he's got that mixture of Flat and jumping in his pedigree so hopefully he'll make a lovely dual-purpose horse."

Wednesday's session, comprising stores and horses in training, concluded with 158 of 186 offered lots selling for an impressive clearance rate of 85 per cent. The changes to the Summer Sale format means year-on-year comparisons bear little scrutiny, but the third and final session saw turnover hit £2,369,850, with an average of £15,000 and a median of £7,000.

At the close of trade, Goffs UK's managing director Tim Kent said: "The three-day Summer Sale has been a success from start to finish and today's trade has been no different. This unique sale was similar in format to our traditional Spring Sale and managed to attract a diverse buying bench that was prepared to spend at all levels of the market, either in person, on the phone or online.

"It's this varied selection of horses that helps to attract these buyers each year and I would like to extend our heartfelt thanks to all vendors of stores and horses in training who have supported us during these unprecedented times and helped Goffs to conduct a very successful sale under a unique set of challenges.

"The obvious highlight of the day was the Million In Mind dispersal, which managed to achieve the second highest price in their history, and we are indebted to Anthony Bromley and David Minton for their continued commitment to the sales at Doncaster. It's always a privilege to offer their draft and it's wonderful to be able to achieve this result for them and their investors.

"It's also reassuring to see that sort of money being spent on horses at this time and I'm sure that the results of this week will help to reassure vendors and purchasers in advance of the Goffs Land Rover Sale in two weeks' time.

"Three good days selling two categories of horse at one unique event. It was a long way from what we planned at the beginning of the year but the results were every bit as good as we could have hoped for and we would like to thank everyone who has participated at Doncaster this week – without you, this would not have been possible."

FIRST PUBLISHED 6:49PM, JUL 29 2020
It's great for the game and given the way things are at the moment it's fantastic to see that horses can still make that sort of money