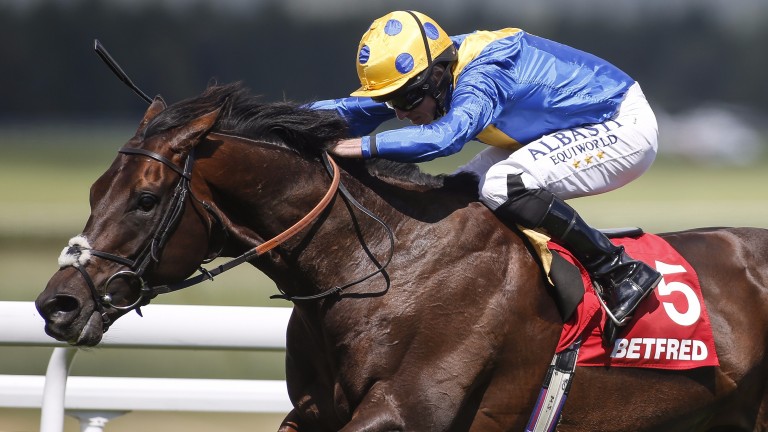 'Solid if unspectacular' is the euphemism often applied to those stallions that never quite manage – despite too steady a stream of winners to be viewed as outright failures – really to excite breeders.

Before this season, Poet's Voice might have been one damned with such faint praise. Twenty-odd two-year-old winners from his first crop in 2015, including three at stakes level, made for an encouraging start – albeit one overshadowed by the freshman exploits of Zoffany –while a fifth-placed finish among the sophomore sires in Europe last year, based on prize-money, was difficult to knock if not entirely earth-shattering either.

The bare facts at the end of last year were that Poet's Voice, from his first two crops of runners, had notched three Pattern winners but only one of them – the promising Oh So Sharp Stakes scorer Poet's Vanity – in Britain or Ireland. For one reason or another, the sire has fared extraordinarily well in Italy and the other two, Poeta Diletto and Voice Of Love, scored in that beleaguered racing nation (daughter Mi Raccomando also took the country's 1,000 Guineas this year).

That lack of domestic top-notchers meant the yearling average for Poet's Voice plummeted from 102,092gns for his first offerings in Britain and Ireland to 38,783gns for his second, and it fell again to 23,098gns for his third - this year's juveniles.

The fact that Darley this year cut the stallion's fee by a third, to £8,000, could be viewed as an acknowledgement of that faltering start.

Suddenly, though, Poet's Voice has been achieving things that are approaching spectacular rather than just solid. His record in 2017 is worthy of full-throated, not faint, praise.

First of all, he has quietly been accumulating two-year-old winners in double-quick time. Up to Tuesday, he had recorded 17 across Europe: a figure matched by that celebrated source of precocity, Acclamation, and beaten only by the formidable Kodiac and his prolific studmate Zebedee.

Voicemail was the latest juvenile winner for Poet's Voice, when the James Tate-trained filly eased to a three-length victory at Ripon on Monday. Roulette – another filly, with Michael Bell – scored in a competitive maiden at Glorious Goodwood, while Nobleman's Nest, a Simon Crisford-trained colt with some fancy entries, was a convincing novice stakes winner at Newmarket last month.

By displaying a useful level of ability at two, these horses are taking after their sire. In his racecourse pomp, Poet's Voice was the highest rated of more than 30 juvenile winners who emerged from Dubawi's debut crop, taking the Champagne Stakes and running third in the Vintage Stakes.

He progressed into a brilliant miler at three, claiming the scalp of Rip Van Winkle in the Queen Elizabeth II Stakes. With that in mind, perhaps the most encouraging impetus for his future appeal is Poet's Word. Here is a horse improving with age and, judged on an impressive success in the Group 3 Glorious Stakes at Goodwood this month, looking capable of putting it up to the best in Britain and Ireland over middle distances.

Poet's Voice might still be outnumbered as a Pattern winner in Britain or Ireland by those in mainland Europe: he and Poet's Vanity make it two, versus four on the continent, including this season's German 2,000 Guineas hero Poetic Dream.

But if some of the rash of two-year-old winners by Poet's Voice can convert their potential into big-race performance, there will be no more 'solid but unspectacular' euphemisms.

Poet's Voice covered 155 and 118 mares at Dalham Hall Stud in 2015 and 2016, so will have plenty of stock in the pipeline. And his momentum on the track – between all these two-year-old winners and the ascent of Poet's Word – has certainly come at the right time for those selling his yearlings in the coming months.

There are three by the sire set to sell at this weekend's Arqana August Yearling Sale, including a colt who is the first foal out of Alta Lilea, a daughter of Galileo who finished placed in the Park Hill and Lillie Langtry Stakes, from Haras d'Etreham.

There is just one on offer at Doncaster later in the month: a colt out of an unraced half-sister to the useful pair Geesala and Tomintoul Singer consigned to the Silver Sale by Harry Dutfield.

There is only one chance to purchase a Poet's Voice yearling at BBAG, too: a colt out of a sister to Group 1-placed Silvaner from Gestut Fahrhof.

Plantation Stud sends a colt by the sire out of an Acclamation mare, related to Grade 1 performers Sea Island and Sightseeing, to the new Tattersalls Ireland Ascot Yearling Sale in September; while later that month a Poet's Voice filly out of English Ballet, a Group 3-winning and Group 1-placed half-sister to Classic heroine Star Of Seville from Norelands, goes on offer at Goffs.

There is no shortage of choice for those seeking a Poet's Voice yearling at Tattersalls in October: three in Book 1, three in Book 2 and a bumper 30 in Book 3. Highlights include the half-brother to top-class sprinters Deacon Blues and The Tin Man in the Newsells Park Stud draft, and the half-sister to Group 3 scorer La Rioja from Pier House Stud in Book 1; plus the colt out of Group 3 winner Our Faye from Manor House Farm Stud in Book 3.

So while there will be yearlings by more fashionable sires at the sales in the coming weeks, improving results for Poet's Voice this season could certainly give his battalions a timely lift.

Dam of Barney Roy in foal to Dubawi

Exciting juveniles hint at better times ahead for New Approach

FIRST PUBLISHED 11:16PM, SEP 1 2017
Suddenly, though, Poet's Voice has been achieving things that are approaching spectacular rather than just solid