Black Caviar's yearling colt given name worthy of a Prince

The youngster is by leading southern hemisphere sire Sebring 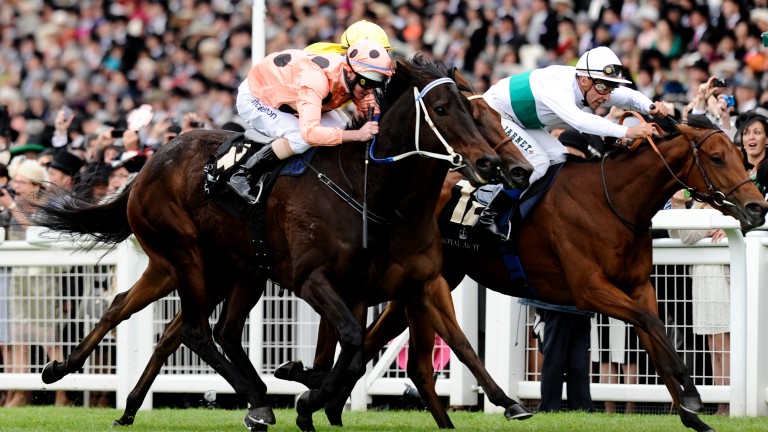 Black Caviar (salmon and black spots): narrowly holds on in the 2012 Diamond Jubilee Stakes at Royal Ascot
Alan Crowhurst/Getty Images
1 of 1
By Ollie O'Donoghue 4:32PM, MAY 11 2017

Undefeated wondermare Black Caviar's second foal, a colt by leading southern hemisphre sire Sebring, has been named Prince Of Caviar, and is due to go into training with the Hawkes Racing team of John Hawkes and his sons Wayne and Michael.

Black Caviar, a ten-year-old daughter of Bel Esprit, was trained by Peter Moody to win all of her 25 starts. Her remarkable career saw her claim 15 Group 1 races, the majority of which were gained over sprint distances, although she did also win the CF Orr Stakes over 7f.

She memorably held on by the skin of her teeth in the 2012 Diamond Jubilee Stakes at Royal Ascot, her only venture outside of her native Australia, when jockey Luke Nolen stopped riding briefly inside the final furlong.

Black Caviar is a half-sister to All Too Hard, a four-time Group 1-winning son of Casino Prince who now stands at Vinery Stud in Australia. The pair are out of Helsinge, a half-sister to Group 1 handicap scorer Magnus, and Group performers Wilander, Scandiva, Arctic Flight and Lionhearted.

Prince Of Caviar's year-older Exceed And Excel half-sister Oscietra has plenty of ground to make up on her illustrious dam, having finished third on debut at Flemington on New Year's Day. The filly was named after one of the most prized and valuable types of caviar in the world.

Black Caviar also has a Snitzel filly foal and was covered last year by leading shuttler More Than Ready.

Sebring stands at Widden Stud at a fee of A$66,000 (£37,770/€44,740). His fee has doubled since the 2012 breeding season, thanks in no small part to the exploits of Australian Derby and Queen Elizabeth Stakes scorer Criterion.

FIRST PUBLISHED 4:17PM, MAY 11 2017
Black Caviar, a ten-year-old daughter of Bel Esprit and Helsinge, was trained by Peter Moody to win on all of her 25 starts