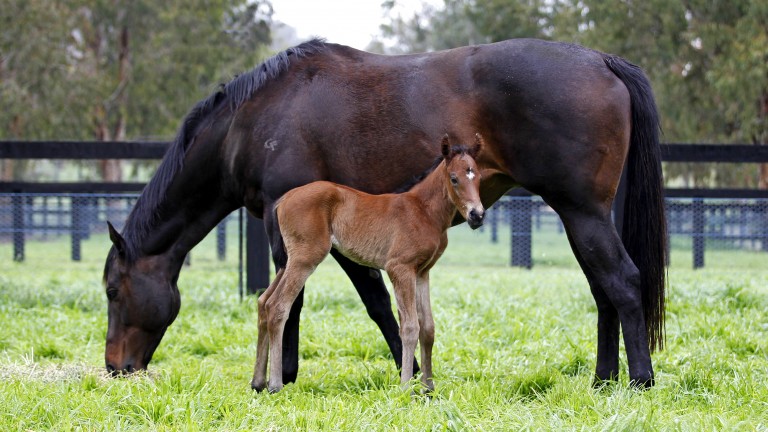 Oscietra will become the first runner for her dam and wondermare Black Caviar when she lines up in a 5f fillies' maiden at Flemington on New Year's Day on Sunday.

A daughter of Exceed And Excel, Oscietra will begin her career on the same course and distance over which her dam won on debut.

The David Hayes-trained filly is no stranger to the racecourse, having already won a barrier trial at Flemington beating four rivals by about a length.

Bred by Rick Jamieson, by Bel Esprit out of the Desert Sun mare Helsinge, Black Caviar is a half-sister to All Too Hard, who won the Caulfield Guineas and was narrowly defeated in the Cox Plate in 2013, and who is now standing at stud in Australia.

Moody bought Black Caviar for A$210,000 at the Melbourne Premier Yearling Sale in 2008.

He was no stranger to the bloodline as he had trained Magnus out of Black Caviar's second dam Scandinavia. Magnus won the Galaxy Handicap and was second in the Oakleigh Plate and Newmarket Handicap, all Group 1 races.

Black Caviar was a top-class racemare who went undefeated in 25 starts, including 15 Group 1 victories from 5f to 7f.

Her most memorable race was perhaps the Diamond Jubilee Stakes at Royal Ascot in 2012, when an unfortunate error of judgment led to jockey Luke Nolen easing up on her in the last furlong before he spurned her back into action to beat Moonlight Cloud by a head.

The winning margin was the shortest in her entire race career.

Exceed And Excel was a top-class Australian sprinter, winning the same Newmarket Handicap as Magnus, and was purchased after his racing career by Sheikh Mohammed to stand for his Darley operation.

He will stand the 2017 breeding season at Kildangan Stud at his highest ever fee of €5o,000.

Black Caviar also has a yearling colt by Sebring and a filly foal by Snitzel.

FIRST PUBLISHED 5:35PM, DEC 30 2016
Black Caviar also has a yearling colt by Sebring and a filly foal by Snitzel