Bjorn Nielsen and Form Bloodstock among buyers on day two 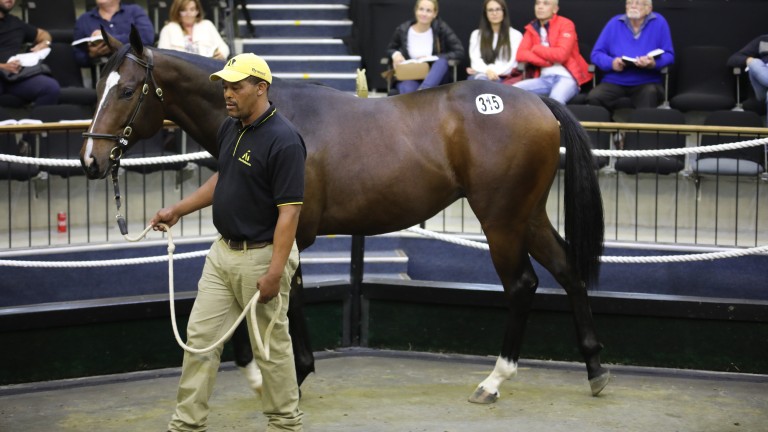 Colts by champion South African sire Silvano and Shadwell's ill-fated Joel Stakes scorer Soft Falling Rain shared top billing on day two of the Emperors Palace National Yearling Sale in Johannesburg on Thursday, when each of the pair were sold for R2 million (£107,000 / €124,000).

Both were consigned by Mary Slack's Wilgerbosdrift Stud, who had a day to remember when selling a Silvano brother to Grade 1 winner Nightingale for R9m on Wednesday, the highest price ever paid for a thoroughbred at public auction in South Africa.

That colt is out of the Grade 3 winner Quickwood, a daughter of Fort Wood and four-time winner Quick Succession, whose other daughter The Heiress produced the joint-session topper on Thursday by Soft Falling Rain.

The Heiress previously marked herself out as a quality broodmare having produced the SA Fillies Classic heroine Athina, another daughter of Fort Wood.

"The Soft Falling Rain is a good-looking horse and a half-brother to a Grade 1 winner," said Jehan Malherbe of Form Bloodstock, who signed for the colt. "We didn't think we'd have pay that much for him but the client wanted to get their hands on him."

The colt, a late August foal, was followed into the ring by the November-born Silvano colt, who will race for Stradivarius's owner-breeder Bjorn Nielsen.

"He's a very athletic, relaxed colt," said Nielsen. "He'll go into training with Justin Snaith, He's by a great sire, was a beautiful mover and has a very nice pedigree."

The colt is out of a half-sister to the talented Kavanagh, from the further family of Group 3 winner Siyoushake and champion US two-year-old Rhythm.

"She's foaled down to Frankel and visits Sea The Stars this year," he said.

Slack oversaw the sale of the two colts from her position opposite the rostrum, and expressed her satisfaction with Wednesday's record-breaking sale.

"The Silvano brother to Nightingale was a very nice horse and we thought he'd sell well, but we didn't expect that," she said.

Malherbe has been a constant presence throughout the National Yearling Sale and his other significant purchase on day two was a November-foaled Querari colt offered for sale by owner-breeder John Slade.

"He's a beautiful horse but lacks a page, though he is out of a Galileo mare," he said. "A smart horse I bought called Monks Hood is by the same sire, so I have a bit of a soft spot for his progeny."

Querari, a stallion son of Oasis Dream, was bred and raced by Gestut Fahrhof in Germany and won the Premio Presidente della Repubblica while it was still a Group 1 contest, and he was subsequently retired to stand at Maine Chance Farms in 2011.

He has sired 11 Graded winners to date headed by the Grade 1 Thekwini Stakes scorer Querari Falcon.

South African owner Nick Jonsson played an active role throughout the first session, signing for the R2.2m Dynasty brother to champion racehorse on day one.

He entered the fray once more on Thursday when purchasing another colt by the late, great sire for R1.3m from his position opposite the rostrum.

"He'll go into training with Justin Snaith," said Jonsson of the September-born colt. "He was a lovely horse and just needs time to mature, and Justin was very taken by him.

"What the mare has done is phenomenal - to produce four stakes winners by four different sires - and Dynasty's a class above them."

Stock of the late Captain Al also proved a hit in the ring with Candice Robinson and Mark Bass of Bass Racing signing on the dotted line at R1.2m for a September-foaled colt out of the Galileo mare Untoward from Cheveley Stud.

"He's a lovely, strong individual by a very popular sire," said Robinson. "He's strikes us as an early, sprinter-miler type and has been bought on spec."

The colt has an attractive pedigree being a grandson of the Breeders' Cup Juvenile Fillies and Santa Anita Oaks heroine Eliza.

Robinson also shed some light on the Frankel colt who Bass Racing also paid the same amount for on the first day of trade.

"He's a lovely type with a lovely pedigree," she said. "He'll need some time to mature and can only improve. He's quite small but neat and we'd see him as a Guineas type further down the line.

"He'll be the first Frankel we've trained and that will be an honour."

Both purchases for Bass Racing were consigned by Rathmor Stud.

Consigned by Mauritzfontein, he is out of the Fastnet Rock mare Carraig Anoair, from the same family as Immortal Verse, The United States and Hydrangea.

FIRST PUBLISHED 6:25PM, APR 25 2019
Both top lots consigned by Mary Slack's Wilgerbosdrift Stud, who had a day to remember when selling a Silvano colt for R9 million on Wednesday