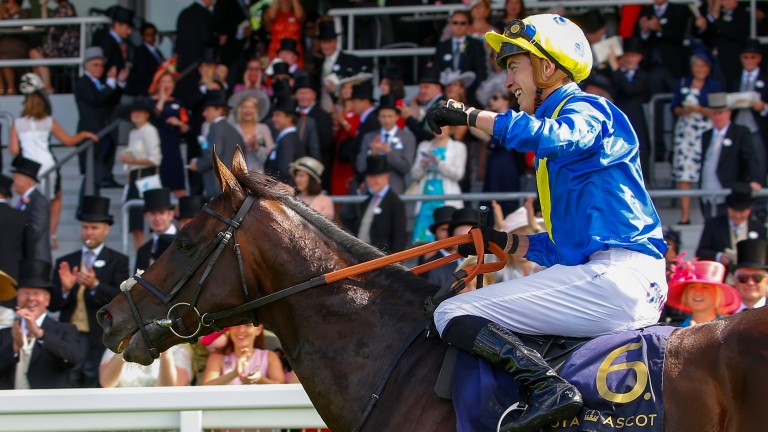 Darley sires have been enjoying a fine week at Royal Ascot, with Shamardal having notched a double through Blue Point and Aljazzi, and Rio De La Plata on the scoreboard, but victory for Poet's Word in the Prince of Wales's Stakes on Wednesday might have brought Sheikh Mohammed's team mixed emotions.

The Sir Michael Stoute-trained five-year-old easily beat the odds-on Cracksman to become the first top-level winner for Poet's Voice, the Queen Elizabeth II Stakes winner by Dubawi who stood at Dalham Hall Stud until his death aged only 11 in March.

Poet's Voice had just made his presence felt as a stallion in 2017, accumulating a haul of two-year-old winners bettered in Europe only by the prolific Kodiac and Dark Angel, with Poet's Word announcing his arrival at the top table with victory in the Group 3 Glorious Stakes and second place finishes in the Irish Champion Stakes and British equivalent at Ascot.

This year the Saeed Suhail-owned Poet's Word has also finished second in the Dubai Sheema Classic and taken the Group 3 Brigadier Gerard Stakes, while Poet's Voice has also been represented by the winners of both the Italian Derby and Oaks in Summer Festival and Sand Zabeel.

Poet's Word was bred by Woodcote Stud out of the Listed-placed Nashwan mare Whirly Bird from a family in form.

He is a half-brother to dual Group 3 winner Malabar (by Raven's Pass) and to Whirly Dancer (Danehill Dancer), the dam of last season's Railway Stakes winner and Phoenix Stakes and National Stakes runner-up Beckford (Bated Breath), who has won the William Walker Stakes in 2018 after being transferred to America.

There was a certain irony in Poet's Word taking the scalp of Anthony Oppenheimer's star colt Cracksman to land the Prince of Wales's Stakes, as he actually hails from a family long nurtured at the Oppenheimer family's Hascombe and Valiant Studs.

Whirly Bird's dam Inchyre carried the famous black and white Oppenheimer silks to win a Warwick maiden and finish fourth in two Listed contests before she was sold to Woodcote Stud for 260,000gns at the end of her racing career.

Inchyre was in turn out of Inchmurrin, a daughter of Lomond who won the Child Stakes (now Falmouth Stakes) and finished second in the Coronation Stakes for Sir Philip Oppenheimer.

Inchmurrin produced the Hungerford Stakes winner and useful sire Inchinor and also features as ancestress of Group/Grade 1 winners Harbour Law and Miss Keller as well as Agent Murphy, Johann Strauss and Venus De Milo, who were all placed at the highest level.

Poet's Word was bought by Charlie Gordon-Watson for 300,000gns from the Woodcote Stud draft at Book 2 of the Tattersalls October Yearling Sale in 2014.

FIRST PUBLISHED 5:27PM, JUN 20 2018
Poet's Word was bred by Woodcote Stud out of the Listed-placed Nashwan mare Whirly Bird from a family in form

Moore has been booked on Mother Earth from day one - is it the right choice? 'Life moves on' - Sir Michael Stoute looks forward after his most painful year Everything you need to know about day three of Royal Ascot on Thursday Can any rivals throw down a challenge to 'enormously exciting' Lady Bowthorpe? Can Love buck the trends for a winning return? Graeme Rodway says it's a big ask Can one-of-a-kind Jim Bolger pull off more Group 1 heroics with Poetic Flare?