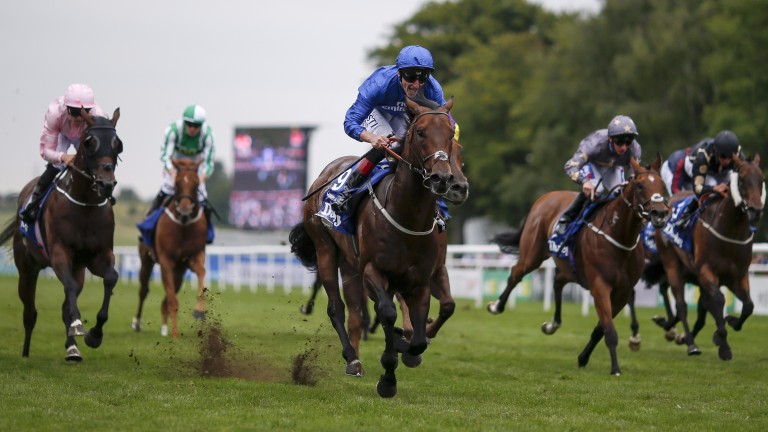 Having nurtured the careers of distinguished performers such as Gilt Edge Girl, Reckless Abandon, Lethal Force and, more recently, Kodi Bear and Harry Angel, it would be something of an understatement to say that Clive Cox is a very good trainer.

But any trainer is only as good as the raw materials they have to work with, and Cox's record of sourcing racehorses of the highest calibre for the kind of money a lot of big-spending owners would find down the back of their sofa really is quite spectacular.

The aforementioned quintet, while by no means the full extent of Cox's success, serve as a fine illustration of the kind of talents he has uncovered for modest sums, at least by modern day bloodstock standards.

The most expensive of those was Kodi Bear, whose purchase price of 62,000gns was a fraction of his market value as a Group 2 winner and Group 1-placed juvenile having just completed his first year at stud. While Lethal Force (€8,500) Gilt Edge Girl (17,000gns), Reckless Abandon (£24,000), and Harry Angel (£44,000) all went on to strike at the top level, with Lethal Force now standing at Cheveley Park and Harry Angel destined for the Darley roster when his racing days draw to a close.

By way of context, the cumulative spend on those five horses comes in at comfortably below the average price at most flagship yearling sales.

"It's a game that many people do very well and we've just been very lucky," replies Cox with a customary dose of modesty when asked about his approach to selecting yearlings.

"Everybody has their own opinion - we all know the obvious horses that everybody would like to buy - but you're just trying to find something that's an athlete that isn't entirely obvious. I'm never shy when it comes to buying one for a small sum, so long as we like the horse," he adds, before explaining that an agricultural upbringing and an association with a Royal Ascot-winning trainer played a big part in honing his eye for future talent.

"I grew up with a farming background and have been visiting the sales from a very young age," he says. "And I also spent a lot of time with a very good friend and trainer Matty McCormack, who was a notoriously good judge."

There is, unfortunately for those hoping to replicate Cox's model, no shortcut to success when it comes to purchasing big talents for small money, with his keen eye aided by a good deal of research. But he is quick to stress that this part of the process is not undertaken alone, with a certain multiple Group 1-winning jockey now assisting him in whittling down the myriad lots in mammoth catalogues into viable shortlists.

"It's a team effort, and we do a lot of homework on the pedigrees before we get to the sales," he says. "John Reid helps me at the sales and he's a great asset because he knows as much as anything what we don't like, which makes it easy to focus on the ones we do. John's always been a very close friend and I trust him implicitly." 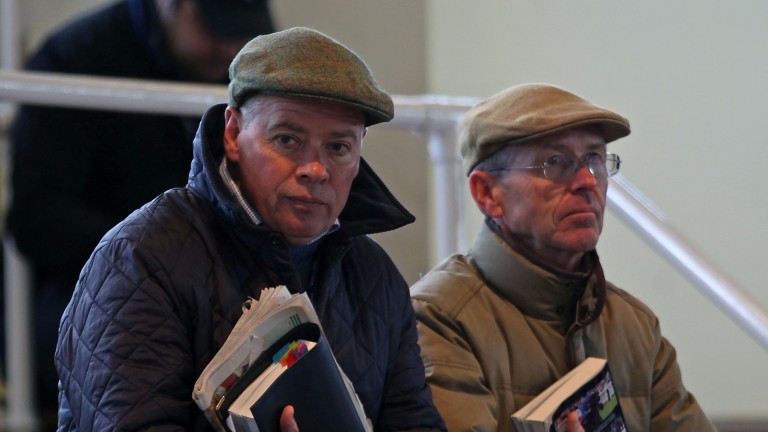 Clive Cox (left) and John Reid survey the ring at Tattersalls
Laura Green
But if shortlists can take days to compile, Cox says his process of elimination on the sales ground takes much less time.

"Most people in this business know pretty quickly if they like something or they don't. Very few horses grow on you within half an hour - within the first ten seconds you've usually made your mind up," he says.

In an era of agents, advisers and consultants, it's food for thought that the firsthand approach employed by Cox has reaped such rich rewards, though he recognises his modus operandi comes with both pros and cons.

"A lot of these agents have a bit more time and can look around the whole bunch two or three times," he says. "But if you're going to be looking at something every day, I like to have that opportunity to see horses at the sales. Personally I like to see them among the other horses as much as anything.

"But don't get me wrong, we've been sent some very nice horses from every direction, and I'm very proud of the pedigrees we now have in the yard. But I'm still grateful for the chance to buy horses, as that's our future. I've got a great team at home, but without the right raw materials to work with a slow horse will still be slow.

Cox says that one of the benefits of working the sales alongside training is the opportunity to build up a familiarity with the progeny of certain sires and certain families, and it is that familiarity factor that led him to his latest star, the upwardly mobile July Cup winner Harry Angel, who now looks an absolute steal having cost a mere £44,000.

"It's very nice when you get to know families, that's very much a positive - especially when you know you can rely on a family, and that was very much the case with Harry Angel," he says.

"He came from a wonderful nursery of Paul McCartan's. I bought Xtension from Paul, and obviously Harry Angel is out of a half-sister to Xtension, so that was the main attraction in the first place.

"I also trained his brother who was actually owned by the same gentleman, Peter Ridgers, and he won over a mile and a quarter! But the same rules applied, and being by Dark Angel was a huge plus," he explains, before adding that landing the winning bid for Lot 160 at the 2015 Doncaster yearling sale came as something of a surprise.

"He was full of presence, there was everything you want in a horse and, frankly, I didn't think I'd be buying him. I was delighted when the hammer fell and he was coming our way. The rest of the story tells its own tale."

It is little wonder that Cox was surprised to pick up a colt by one of the hottest young sires around for such a relatively meagre amount (his colts' yearling average that year was 118,015gns), as having been an instrumental figure in the rise and rise of the Yeomanstown Stud resident, few could match his affinity with the progeny of Dark Angel.

Harry Angel is, of course, not the first Group 1-winning Dark Angel colt Cox has trained, as he oversaw the career of his first-crop son Lethal Force, who provided his sire with a first top-level win when landing the 2013 Diamond Jubilee Stakes - coincidentally on the same day that his second, Mecca's Angel, broke her duck in a Haydock maiden.

"Unfortunately I'll probably have to start looking for the next Dark Angel rather than being able to afford to buy too many more,” he says with a wry smile. "It's a sad fact but it's really great to have played a part in his roll of honour.

"I'm delighted that Lethal Force looks like he's doing well at stud and I'm very proud there are horses standing at stud that we've trained. We're always keen to look at the progeny of those horses when they come on the market." 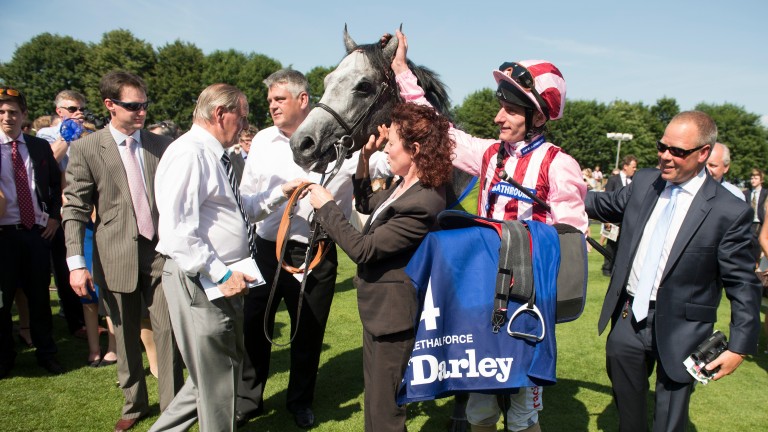 Clive Cox (right) greets Lethal Force as the son of Dark Angel returns to the winners' enclosure after landing the 2013 July Cup
Edward Whitaker
While Cox is understandably a fan of familiarity in a pedigree, the Harry Angel story is also testament to the emphasis he places on a horse's female line.

"The dam's side is so important, and to have confidence in the female side of the pedigree," he says. "I think most stallions will perform to a level. If you're buying first-season sires, none of us know how good they might or might not be, but if the mare can give you confidence, every now and again you land on a Dark Angel and get an upgrade."

Given the arduous sales season kicks off at a point when the turf calendar is approaching a climax, a great deal of enthusiasm is required to run one of the country's leading yards while trying to restock with the next potential star. And Cox has enthusiasm in spades, albeit with an admirable pinch of humility for someone so close to the pinnacle of his profession.

"Very much so," he says when asked if he's looking forward to sales season. "Every year we have to start again, which is quite a formidable thought really, but it's an important part of the year.

"The sales seem to start earlier every year and it's not always easy to have a book of orders in August. But with success comes confidence from people who are prepared to back our judgement and I'm very pleased our record is intact with value for money. But ultimately I'm just grateful to make a living doing this, as racing is my passion."

With an outlook fixed firmly on the future, not to mention a diary that includes both sourcing stars for the future as well as mentoring the current intake at his Lambourn base, there is little time left for Cox to blow his own trumpet. Not that he's inclined to, even quietly.

"When they line up in the stalls it doesn't really matter," he says. "I can let the horses do the talking then."

And nothing speaks quite as loudly as a Group 1 winner secured for selling plater money.

The €1,700 jumps store who has become a first-rate Flat broodmare

FIRST PUBLISHED 6:50PM, FEB 6 2018
Unfortunately I'll probably have to start looking for the next Dark Angel rather than being able to afford to buy too many more