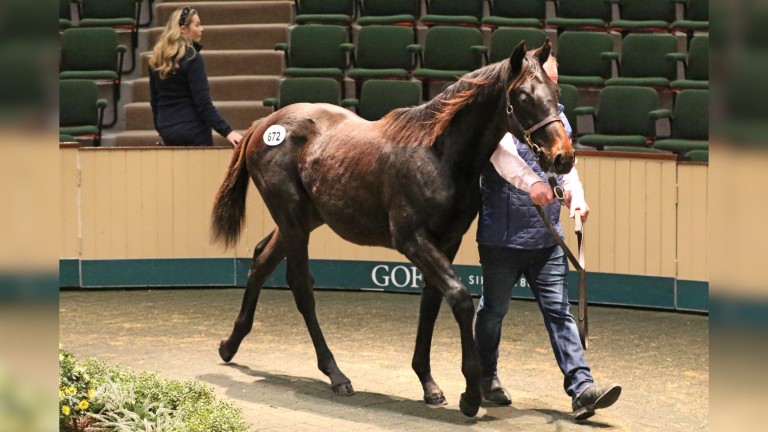 Gems continues to prove the gift that keeps on giving, as the latest foal out of Siobhan and Padraig O'Rahilly's mare, a colt by No Nay Never, was knocked down to Ciaran 'Flash' Conroy of Glenvale Stud for €360,000 during Wednesday's session of the Goffs November Foal Sale.

Remarkably, considering her subsequent exploits, the daughter of Haafhd was purchased for a mere €5,500 at the Goffs February Sale in 2013 but following Wednesday's six-figure transaction her foals have now fetched €614,000.

"We're absolutely delighted, I can't believe it to be honest," said a visibly stunned Siobhan O'Rahilly.

The sale capped a fine run of form for Gems and the O'Rahillys, as Mystery Power, the mare's fourth foal and a full-brother to the €360,000 colt, landed the Group 2 Superlative Stakes back in July, while her Australia yearling, in which the breeders had retained a quarter share, was sold to MV Magnier for €525,000 during the Orby Yearling Sale.

"It's just been an unbelievable year for us," O'Rahilly continued. "We were hopeful, what with this colt being a full-brother to Mystery Power and being such a nice foal, but you still have to get here and get to the ring safe and sound.

"We're delighted and relieved at the same time. There's some long days during the breeding season but all that feels like its paid off for us after this result, we're very lucky."

"She's definitely well-named as she's been an absolute gem for us," added O'Rahilly, before explaining what appealed about the mare when she was purchased back in 2013.

"She's got a nice pedigree and is a mare with good movement, we just really liked her. She's gone to all the right sires from then on so it's all worked out."

No decision has been made with regards to Gems' next covering, with O'Rahilly saying her and her husband, who both work full-time at Seskin Stud, will take a watching brief until she has delivered her next foal.

She said: "She's back in foal to Australia and carrying a filly. She's due in late March so we'll just hope to get a healthy foal and once we know her and the foal are okay we'll go from there."