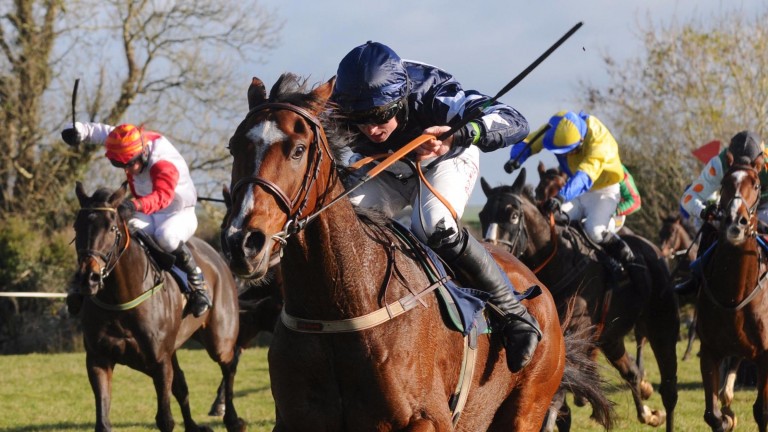 Poli Roi: sale-topper was a winner between the flags at Rockfield last week
Healy Racing
1 of 1
By Lydia Symonds 5:40PM, NOV 12 2016

Poli Roi was king of the Tattersalls Ireland Cheltenham November Sale after racing at Prestbury Park on Friday, after Mags O'Toole, bidding on behalf of trainer Gordon Elliott, went to £300,000 to secure the son of Poliglote.

The four-year-old, who was an impressive ten-length winner of his maiden point-to-point at Rockfield last week, was offered as part of the draft from Denis Murphy, who was also responsible for the second top lot of the evening.

Poli Roi is a half-brother to the Grade 1 winner Le Rocher, and is by the same sire as Don Poli, which owner Alan Harte described as a big pull when he bought him as a store at Goffs Spring Sale for £46,000.

"He's by a sire on the up, what with Don Poli doing so well last season. I thought he would make a bit, but I never dreamed it would be that much."

Murphy, who has trained the gelding for four months, said he was not surprised he sold for that much and is confident he will be a lovely horse.

"He's by the same sire of Don Poli, which is of course helps," said Murphy. "He has been with me for four months and I expect him to be a very good horse."

Trainer David Pipe, who saddled Champers On Ice to finish third in the Albert Bartlett Novices' Hurdle in March, was the underbidder.

Murphy no doubt left Cheltenham on Friday night feeling as though he had trained a festival winner, after another horse consigned by his stables sold for £250,000 to bloodstock agent Tom Malone, working on behalf of trainer Colin Tizzard.

Finian's Oscar, a son of Oscar out of a half-sister to Champion Chase winner Finian's Rainbow, was an eye-catching eight-length winner of a Portrush point-to-point last month. He was bought for Tizzard's newest owners Ann and Alan Potts.

"I fell in love with the horse over in Ireland," said Malone. "I thought his win in the point-to-point was something special and I spoke to Jamie Codd, who rode him that day, and he is not normally very vocal, but he said he was very good.

"I got him vetted in Ireland prior to coming here. He's by the right sire and the dam is a half-sister to a Champion Chase winner, so the pedigree obviously stands up."

Murphy was equally delighted with the sale, saying: "I've had the horse for four months and he's always been gorgeous and he's by the right sire. He's gorgeous - he could have made a show horse he's that good-looking and he's got the engine to go with it."

Tizzard, who has already got plenty to look forward to this season, said he would not wait around with the gelding and was hoping to get him out on the track soon: "It's a lovely horse and just the sort we can press on with. I should think he will be entered in a novice hurdle in the next three or four weeks."

Another big purchase for Tizzard

Tizzard again made his presence known when he took home a son of the ever-popular Kings Theatre for £130,000, and will be owned by one of his regular owners John Romans.

Storm Home, who fell when in the lead in his only start in a Largy point-to-point in April, is the fourth foal out of a half-sister to the seven-time winner The Romford Pele.

The four-year-old was consigned by Irish trainer Warren Ewing, who is no stranger to success at the Tattersalls Cheltenham Sale having been responsible for the sale-topper in January.

"He did the splits when he fell in his point to point so we've given him a bit of time after that," said Ewing. "He's only been back in work for five weeks, but I was happy that he made that. He's a very nice horse and I'm pleased he's going in training with Colin Tizzard, who's a top trainer."

Normandy-based trainer Louis Baudron will be satisfied with his first trip to Cheltenham after Demon D'Aunou, a son of Martaline, fetched £130,000 after being bought by Frank Berry, racing manager to top National Hunt owner JP McManus.

Baudron, who sold the three-year-old's full sister, Coquine D'Aunou, to Eddie O'Leary last year, believes he has got potential to go far.

"This is my first experience at this sale and it's been a good experience," said Baudron, who trains mainly Flat horses and trotters in Normandy. "I'm very happy. I was sure it was going to make a lot, so I leave very satisfied."

Commenting on the sale, Tattersalls Ireland's director of horses in training sales Richard Pugh said: "It's great to be back at Cheltenham for the beginning of our second sales season at this unique venue.

As always we are reliant upon vendors to supply us with the calibre of horse which this sale is adept at rewarding. Realising prices such as £300,000 and £250,000 respectively reinforces the message to vendors that selling at public auction guarantees maximum return for them.

"Most of the leading industry players were either in attendance or represented, which is a testament to the quality of graduates who continue to perform to the highest level on the track.

"It is also encouraging to see rises across many indicators and we look forward to returning here on December 9, when the sale will also include a National Hunt breeze-up of three-year-olds."