The Flemensfirth gelding won on debut at Oldtown in February 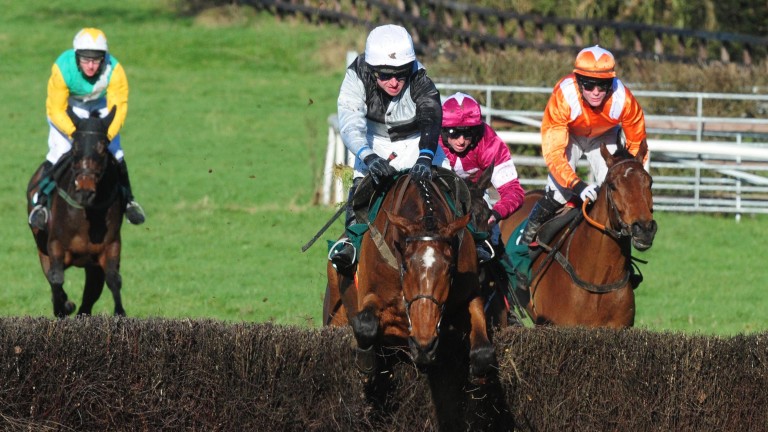 Flemenshill jumps ahead in a four-year-old maiden at Oldtown ahead of Gigginstown runner Defi Bleu
Healy Racing
1 of 1
By Ollie O'Donoghue 4:35PM, FEB 16 2017

The record price for an Irish point-to-point horse at auction was broken on Thursday when Tom Malone and Joe Tizzard went to £480,000 for the four-year-old Flemensfirth gelding Flemenshill.

Trained by Colin McKeever for owner Wilson Dennison, Flemenshill was a four-length winner in a four-year-old maiden at Oldtown this month, seeing off the fancied Gigginstown House Stud runner Defi Bleu.

The horse is out of the unraced Dr Massini mare Southern Skies, who has produced four winners from six runners.

He will now join Colin Tizzard's stable of stars.

Malone said: “I liked everything, everything about him. It sounds stupid but he ticks every box for me: pedigree, form of the race, time, good track there is an awful like to about him. I also just loved the horse himself. He is a shell, to be ready as a four-year-old in February at the size of 16.3 hands and to be ready at this time of his life it was a bit special.

"We won’t see him until next autumn, he’ll go to grass in the summer. It’s amazing what he’s done so far and only really good horses can do that. The form for me of the race is impressive.

"Gordon Elliott trained the second horse and he said he was a good horse - he topped the Derby sale and he’s a beautiful horse himself, they fancied him strongly that day.

"So the form of the race couldn’t have been any stronger and he won the race three out, before the straight. That’s when I looked down and thought 'wow, you’re something special'. He jumped in to the race and went out of it on the bridle when the other horses had to be pushed away. He’s just clearly got a big engine.”

Tizzard added: "I like to ride them before because we are going to train them obviously! I only had a little trot and a little canter but I liked what I felt."

Other horses who have graduated from McKeever's point-to-point academy are stars Imperial Commander, Forget The Past and Truckers Tavern, and more recently Bellshill, Blaklion, Shaneshill and Yorkhill.