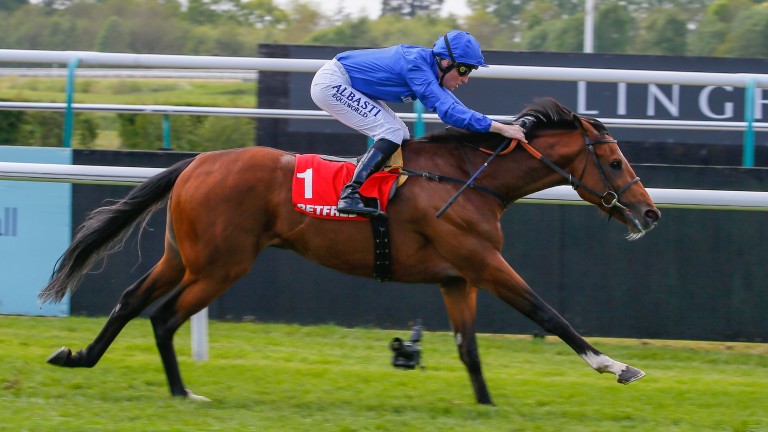 Best Solution: the son of Kodiac strides to an impressive success in the Lingfield Derby Trial
Mark Cranham
1 of 1
7:13PM, MAY 30 2017

Breeding thoroughbreds is a tricky business, a puzzle with an infinite amount of endlessly shifting pieces, both before and after each new foal has reached the ground. As a result many more of those that play the genetic lottery come away empty-handed than covered in glory.

Occasionally, though, a horse comes along that seems to embody both sides of its pedigree in equal measure, a mix of speed and stamina that results in the breeders’ holy grail, a horse fit for the Derby. While preconceived ideas may need putting to one side in the case of Best Solution, that seems precisely what father and son Cecil and Martin McCracken have bred.

The presence of Best Solution, a son of Kodiac, among the Derby entries is sure to have caused a deal of surprise in some quarters, as the Tally-Ho Stud resident has carved out his niche siring precocious, and speedy stock. But having gone from starting life at stud at a fee of €5,000 to being lauded as one of the finest stallions of his generation, exceeding expectations has been something of a full-time concern for Kodiac.

“We sent Al Andalyya to Kodiac for a combination of reasons,” said Martin McCracken, who, along with various family members, keeps half a dozen mares under the McCracken Farms banner. “We aim to be commercial so we wanted to use a proven stallion that could add a bit of speed. Breeding a Derby horse wasn’t exactly the plan, though funnily enough Mrs O’Callaghan at Tally-Ho told us that Kodiac has a habit of surprising you, and Best Solution has certainly been a very pleasant surprise!

“We were predominantly National Hunt breeders - we bred the likes of Scottish National winner Godsmejudge and Nicky Richards' good horse Eduard - so this has been a whole new experience. I’m a farrier by trade and do a lot of work for a guy called Brian Kennedy of Meadowlands Stud in County Down, who consigned Best Solution. He actually has the half-sister to Cracksman so there’s been a wee bit of healthy rivalry there!”

Initially it seemed as though Best Solution was going to adhere to the traits that have served the progeny of Kodiac so well, primarily precocity and speed. He readily opened his account at the second attempt in a 6f Goodwood maiden, seeing off subsequent Racing Post Trophy third Salouen, among others, before a creditable third-place finish in a local Group 3 at Veliefendi over the same trip.

But since his stamina has been tapped into Best Solution has improved markedly, with his first attempt at a mile seeing him stride to a two-length win in the Group 3 Autumn Stakes at Newmarket, an effort he backed up with a fine second to Waldgeist over 1m2f on his Group 1 debut in the Criterium de Saint-Cloud.

An experiment dropping back in trip and switching to dirt out in Meydan plainly backfired, but it speaks of the durability of Kodiac’s stock that Best Solution bounced back from his fruitless Dubai excursion with an impressive display over 1m3½f in the Lingfield Derby Trial, a race he won by three and a quarter lengths, and had in the bag a long way from home. 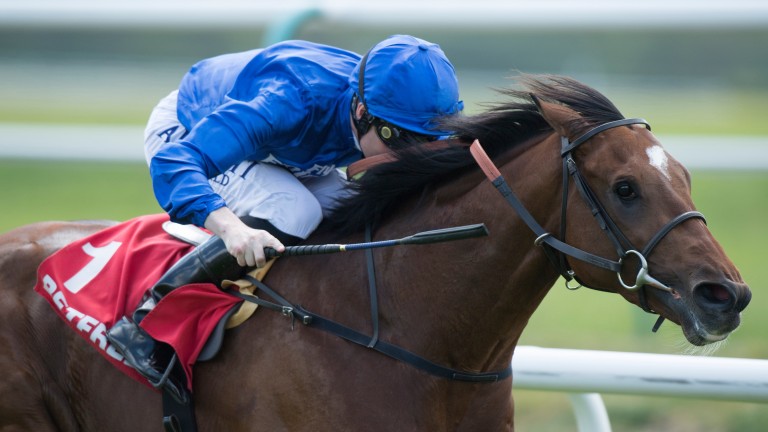 Best Solution: "Mrs O’Callaghan at Tally-Ho told us that Kodiac has a habit of surprising you"
Edward Whitaker

There are, of course, two sides to every story and two sides to every pedigree, and if precocity, durability, and a healthy dose of class has come from Kodiac, you need only look as far as Al Andalyya’s close relatives to see how a colt bred from a fee of just €7,500 has found himself rubbing shoulders with the elite of the three-year-old colt crop over 1m4f at Epsom.

The Best Solution tale began in earnest, as so many others have, at Tattersalls, specifically the February Sale in 2012, when the McCrackens parted with the modest sum of 10,500gns for Al Andalyya.

On form alone that price may seem about the going rate for a filly that failed to finish closer than fourth in five starts for David Lanigan. But once upon a time her value had been significantly higher, with Rabbah Bloodstock going to $100,000 for the daughter of Kingmambo at Keeneland’s September Yearling Sale back in 2009.

Form, as they say, is temporary, but the kind of class associated with Al Andalyya’s pedigree is undoubtedly permanent. She is out of a Group 3-placed 1m4f winner by Sadler’s Wells, who is in turn out of Eva Luna, a daughter of Alleged whose finest on course hour came when landing the 1996 renewal of Doncaster’s Park Hill Stakes.

For all her ability to gallop, however, Eva Luna’s most lasting mark has been made as a broodmare, with a particular proclivity for producing high-class middle-distance and staying performers, a trait which has directly influenced not one but two Classic winners, and seems to have permeated the make up of Best Solution.

The genes of Eva Luna, who is herself out of Oaks runner-up Media Luna, are responsible for 2003 St Leger winner Brian Boru, 2012 Hardwicke Stakes scorer Sea Moon, and Moon Search, who not only landed the 2003 Prix de Royallieu but later produced Supreme Novices’ Hurdle winner Cinders And Ashes.

She also produced Soviet Moon, who went unraced but has more than upheld the family name from the breeding shed as the dam of Workforce, who announced himself as an exceptional colt with a seven-length success in the 231st renewal of the Derby back in 2010. 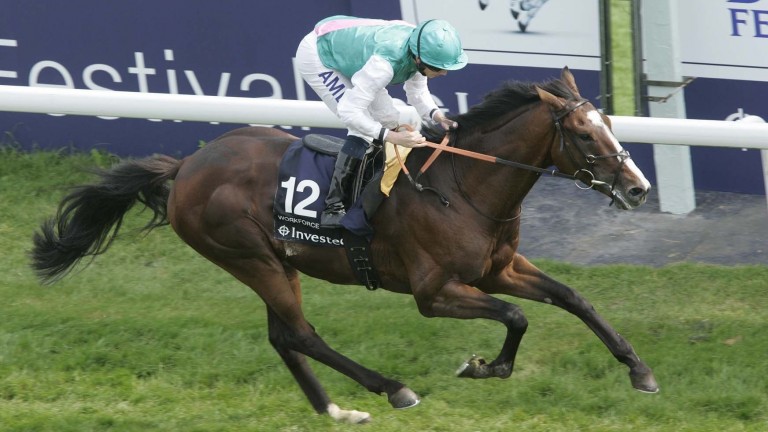 Workforce: 2010 Derby winner is from the same family as Best Solution
CAROLINE NORRIS

“I really liked her family,” explains McCracken when asked what drew him to Al Andalyya. “Workforce is in there, Brian Boru is in the family, it’s a proper middle-distance, Classic family, and that’s what attracted us. We’ve been very lucky as after we bought her her half-brother, Cape Clear Island who won a valuable sales race and was second in the Group 3 Classic Trial, came up.

“The other important thing is that she’s by Kingmambo, which was a big attraction. If we’d have left it a year, by which time he was the broodmare sire of Camelot, there’d have been no way we could have afforded her,” he says.

If Al Andalyya’s pedigree was something of an insurance policy for the McCrackens, it has certainly paid a handsome dividend.

Having been bred, born and weaned, Best Solution passed through a couple more pairs of hands before beginning his racing career in the blue of Godolphin, with John Ferguson parting with 90,000gns at Book 2 in 2015, and McCracken is quick to heap praise on the man that bought the colt from them as a foal.

“Thomas Hassett from Monksland Stables bought him, and we’re very lucky that he went to such a good nursery as Thomas always liked him and did a very good job,” he says.

“It’s all worked out really well. We’ve got our top hats sorted and the whole family is going over to Epsom, it’s never going to happen again so we’re going to make the most of it! The whole thing has been a fairytale.”

McCracken’s assertion that this experience won’t be repeated may not be wholly true, as not only has Al Andalyya since produced a colt by Epaulette - now two and named Desert Mountain - and a filly foal by Gutaifan, but she is now safely back in foal to Kodiac, and in just a few days’ time could well be carrying a brother or sister to a Derby winner.

Breeding may not be quite an exact science nor an fine art, but having sourced a mare with a Classic pedigree for relatively small money and sent her to a stallion who can do no wrong - not once but twice, McCracken and his family may have found what so many search for each year - the right answer to an almost impossibly difficult question. Luck and design may have both played their part, but the result is undeniably the Best Solution.

FIRST PUBLISHED 6:00PM, MAY 30 2017
We’ve got our top hats sorted and the whole family is going over to Epsom, it’s never going to happen again so we’re going to make the most of it!