Who could have guessed the Nijinsky sire line would be so diminished? 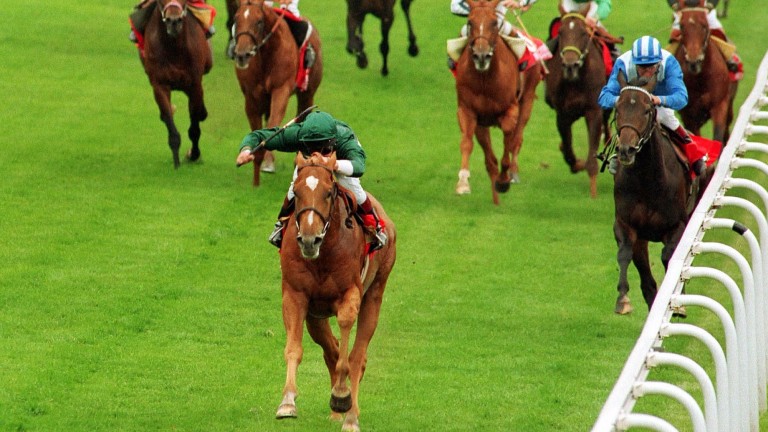 This article was first published in January 2013

The sad news that Generous has died revives memories of a great racehorse – one of the best I’ve ever seen – and of a disappointing stud career. Like many a champion before him, the exciting winner of two Derbys and a King George proved incapable of passing on his own outstanding merit.

It now seems that we are fast approaching the day when we can declare the Nijinsky branch of the Northern Dancer male line officially dead in this part of the world. He and Lomitas, who died towards the end of August 2010 appeared to represent the last hopes for its survival. In their final years neither is likely to have sired a son who might extend the line for another generation.

Nijinsky came from Northern Dancer’s second crop and was his first champion. I remember being captivated by his impressive physique in the paddock before the 1969 Dewhurst, and his achievements in the following year, when he won the Triple Crown – plus the King George in a veritable canter – marked him down as a true superstar.

We knew, of course, that he was a very different physical specimen from his sire, but we weren’t to know that he would remain the odd man out in that regard throughout Northern Dancer’s long stud career. It turned out that the more typical Sadler’s Wells, Danzig and Lyphard founded more enduring branches of the line.

Installed at Claiborne and visited by top-quality mares, Nijinsky was everyone’s idea of a future major sire, and that is exactly what he became. His stock excelled on both sides of the Atlantic, including three Derby winners, two of them – Golden Fleece and Lammtarra – unbeaten, the other, Shahrastani, foaled in the same year as Ferdinand, his winner of the Kentucky Derby. Those four stand-outs featured among a host of top-class colts, some of whom would surely have notable stud careers in their turn.

This time we did not get what we expected. Golden Fleece died very young, leaving nothing of note, while Lammtarra, Shahrastani and Ferdinand all flopped. Green Dancer did creditably, getting an Arc hero in Suave Dancer, Ile de Bourbon had his moments, including a Derby success with Kahyasi, and Royal Academy got plenty who could run, but the likes of Kings Lake, Gorytus and Shadeed featured among a long list of distinguished runners who disappointed at stud. Getting a son who would carry on the line was a widespread problem.

The chief notable exception – up to a point – was Caerleon, more a Northern Dancer than a Nijinsky in appearance, who won both the Prix du Jockey-Club and the Benson & Hedges Gold Cup, and who spent most of his stud innings as the highly-priced number two to Sadler’s Wells at Coolmore.

He got a profusion of high-class winners, even celebrating two seasons as champion sire, but when he died just before the start of the 1998 breeding season, who was his credible successor? Generous had been his real star turn as an athlete, but breeders had soon turned against him, and he was already in Japan. There was nothing else.

Niniski was the unlikely horse who carried things on for Nijinsky. A winner of St Legers at the Curragh and Longchamp was not one to excite breeders unduly, so he never had the best of chances, but he got three first-rate sons in Petoski, who failed as a sire, Lomitas and Hernando, who both earned plenty of credits.

Generous got only two Group 1 winners, both in Germany and both were fillies. Lomitas got a successful son in the widely-travelled Silvano, now held in high regard in South Africa, but his fame in these parts rests on his recently-retired Arc-winning daughter Danedream.

It might yet be too early to sound the death knell for the Nijinsky male line in Europe, as there are still crops to come by Hernando, his son Sulamani remains in service, and Cockney Rebel (by Royal Academy’s son Val Royal) has made a fair start.

But who could have imagined that Nijinsky’s line would now be so reduced in representatives while he was getting all those distinguished racing sons?