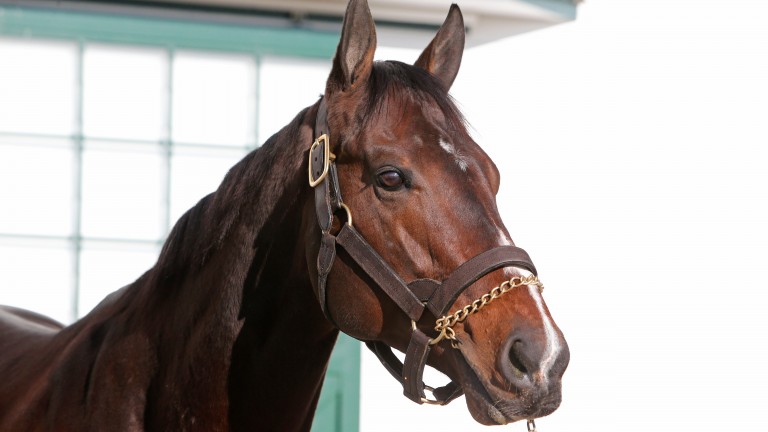 Bolt D’Oro, the multiple Grade 1 winner and one of the most popular young stallions in North America, was taken out of breeding service for two days last month after becoming too aggressive for handlers to safely manage at Spendthrift Farm in Kentucky.

The five-year-old son of Medaglia D’Oro, who also exhibited signs of aggression during shuttle duty in Australia last autumn, has responded positively to changes suggested by an equine behaviourist and is back to performing well in the breeding shed, said Spendthrift general manager Ned Toffey.

“Right now, if you ask me how Bolt D’Oro is doing, I’m going to tell you absolutely fine,” said Toffey. “He got a little aggressive on us and we’ve just changed our protocols to be extra careful.

“He hasn’t missed a beat breeding in the last several days. He’s breeding more quickly and with more focus and is a much happier horse."

One of the mares Bolt D’Oro covered in mid-February was Spendthrift’s multiple champion Beholder, and Toffey said that mating was accomplished without incident. The ten-year-old mare, who delivered her third foal, a War Front filly, in January, was tentatively scheduled for a pregnancy check on Saturday.

While Toffey has learned from his years in the breeding business and through consultations with other farm managers that aggressive behaviour in stallions is not uncommon, he said what Bolt D’Oro exhibited went beyond the level that is typically encountered.

The stallion attacked and injured his former racetrack groom, who was trying to help the Spendthrift staff. Following hospital treatment, the groom has been recovering, although Toffey said he could not provide details as the man is not a farm employee.

When Bolt D’Oro – who ranked third among all North American first-year stallions of 2019 with 214 mares covered, behind only Coolmore’s Scat Daddy duo of Triple Crown winner Justify and Grade 1 winner Mendelssohn – first started becoming unruly during the Australian breeding season, Spendthrift immediately sought advice on how to best address the problem.

Toffey turned to Sue McDonnell, founding head of the equine behaviour programme at the University of Pennsylvania School of Veterinary Medicine’s New Bolton Center and the same specialist who worked with Kentucky Derby and Preakness Stakes winner War Emblem at the Shadai Stallion Station in Japan.

While War Emblem was also known to be difficult to handle, his primary problem was a lack of interest in breeding, and he was ultimately retired after years of siring few foals.

War Emblem was subsequently sent to the Old Friends facility in Kentucky to live alongside other retired American Classic winners Silver Charm and Touch Gold.

Bolt D’Oro’s problems have not included disinterest in mares. However, some of the same suggestions McDonnell presented to Shadai for War Emblem have also been utilised by Spendthrift.

Primarily, she has advised moving Bolt D’Oro into a barn away from other stallions and allowing him to have mares in his vicinity, Toffey said. Such an environment encourages stallions to relax, reducing any tensions they might feel if housed around other stallions that, in the wild, would be rivals.

“Our stallion manager Wayne Howard, after having taken Bolt D’Oro down [to Spendthrift Australia in Victoria], jumped on a plane several weeks later and went down to be with him and was able to implement some of these things and it really helped him through that breeding season,” said Toffey.

"Because of our size and layout here, we're better able to fully implement Sue’s recommendations in terms of keeping him away from the other stallions. Knock on wood, the response has been great. It wasn’t instantaneous, it’s taken several days, but he’s very much improved."

Toffey continued: “Sue came down [to Spendthrift’s farm in Lexington] and spent a day with us. For her, this was sort of a pretty straightforward situation, and she was very confident that her recommendations would improve things. I would say they probably have improved things even more quickly than I'd hoped.

“The interesting thing about it is that all of her advice is not about, ‘Here’s how you interact with the horse.’ The vast majority of it was, ‘Here’s what you do with his environment’ to allow him to relax. The ‘boys club’ that is any stallion barn or complex is not ideal for every stallion."

Toffey noted that there are plenty of stories about tough stallions who have been outstanding sires, such as the infamous Halo, who savaged a groom at Stone Farm, and Dynaformer, who was known for having bitten off a finger while at Three Chimneys Farm.

In his own work years ago as a groom at Brookdale Farm, Toffey recalled that Deputy Minister was a "very tough" horse.

“I took the shank out of another groom’s hands who Deputy Minister had just lifted up by the arm and shaken like a rag doll,” he said.

“Brookdale was always a really well-run place with excellent horsemen, and they just figured out a way to work around it.

“I would say Bolt was probably a little more challenging,” he added. “We’ve been here [at Spendthrift] 15 years and this is the first horse that has even approached this level of toughness.”

In addition to the mares he covered in Kentucky last year, Bolt D’Oro was bred to approximately 100 in Australia. Toffey downplayed a possible connection between the stallion’s breeding activity and his behaviour, pointing out that many stallions known for aggression in the past covered only 40 or so mares annually.

What is certain is that Spendthrift will continue efforts to keep Bolt D’Oro calm and secure, and its employees, as well as visiting mares, safe.

As a son of Medaglia D’Oro, one of the world’s leading sires and a successful shuttler, and the A.P. Indy mare Globe Trot, Bolt D’Oro clearly has strong potential to succeed as a sire. He secured his Grade 1 triumphs as a two-year-old and earned more than $1 million in racing; his stud fee is $25,000.

“He’s going to be a horse - and there are plenty of stallions in central Kentucky like this - that is going to require extra care and precautions when you work around them,” Toffey said.

“Wayne Howard and his groom have done a remarkable job. The measures we’ve implemented, combined with their handling of him and their incredible patience – just staying calm and relaxed with everything they do with him – have really brought him back around. So hopefully this amounts to just a blip on the radar.”

FIRST PUBLISHED 7:35PM, MAR 29 2020
We’ve been here at Spendthrift 15 years and this is the first horse that even approached this level of toughness