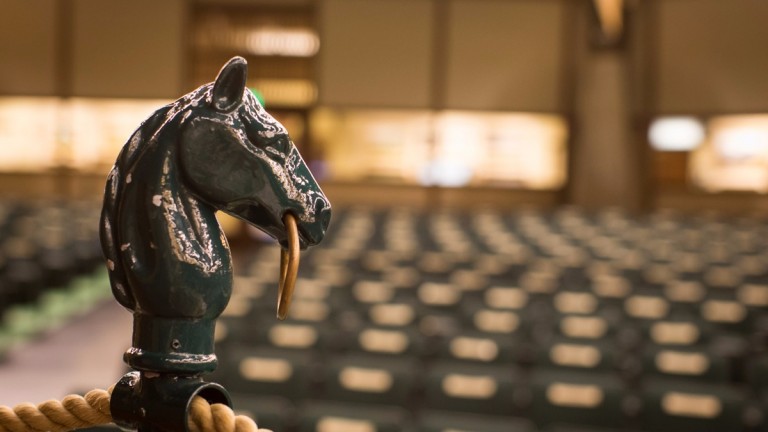 Keeneland: James Keogh signed the docket on behalf of Benoit
Matt Wooley
1 of 1
By Ron Mitchell of the Blood-Horse 6:17PM, NOV 15 2016

For the second day in a row, Louisiana breeder Evelyn Benoit struck for a high-priced mare to breed to her stallion Star Guitar, going to $550,000 for the durable runner Five Star Momma during the fifth session of Keeneland's November breeding stock sale on Saturday.

Sold in foal to top WinStar Farm stallion Tiznow, Five Star Momma topped the session, in which the sale enters a new realm, beginning Book 3 after the best lots in the auction were offered in Books 1 and 2.

Once again, the weather in the Bluegrass was resplendent on Saturday, as a broad-based buying bench competed for the offerings perceived to be the best on the day, resulting in average and median price increases.

From 1,729 horses cataloged, 395 have been withdrawn and 413 (31 per cent) have been bought back, compared with a 27 per cent cumulative five-session RNA rate a year ago.

Keogh signs the docket for Benoit

Kentucky horseman James Keogh signed the ticket on behalf of Benoit's Star Guitar for Five Star Momma, after going to $850,000 on Friday to get the multiple stakes winner and Graded-placed mare Moment Of Majesty.

Keogh said Benoit is buying high-quality mares to breed to Star Guitar, the all-time leading Louisiana-bred earner who is off to a fast start at stud, with two winners from six starters in his first crop to race this year. Star Guitar stands at Clear Creek Stud in Louisiana for a $4,000 fee.

Consigned by Select Sales, agent, Five Star Momma won or placed in 15 of her 22 starts, with two stakes included among her five wins, en route to earning $425,913. The daughter of Five Star Day also placed in four graded stakes, including the Grade 2 Inside Information.

The mare's dam, the winning Nureyev mare Momma in Law, was produced from the Grade 1-placed Infringe and is a sister to Grade 3 winner England's Rose. Although it doesn't show on the catalogue page, the mare's extended female family includes influential broodmare Mumtaz Mahal, according to Keogh.

"She's a really, really nice mare and we're very glad to get her," said Keogh, who operates Grovendale. "She was a high-class mare who carried her form from ages two to five. She was sound and she was fast. It's a really important female family. I just believe in these old pedigrees."

Another plus for the mare was her status of being in foal to two-time horse of the year Tiznow.

"He's a proven horse and you would love to have a racehorse sired by him," Keogh said.

The day's second-highest price was the $360,000 paid by Machmer Hall for six-year-old stakes-placed Addison Run. Consigned by Taylor Made Sales Agency, the mare is out of the Touch Gold mare Fleet and Fancy, a half-sister to champion two-year-old colt and sire Midshipman and to Grade 2 winner Fast Cookie, the dam of Grade 1 winner Frosted .

Machmer Hall's Carrie Brogden said she has an affinity for Unbridled's Song mares, noting this is the 23rd daughter of the former leading sire she has bought.

"They've been good to me - God bless, they've been good to me," said Brogden, who is also a partner in Select Sales, which sold the day's session topper. "I bought a barren Unbridled's Song mare for $30,000 (Provocative), we bred her to Into Mischief, and we sold the foal on Saturday for $170,000. I'm just a huge fan of him. We had a really good year and our broodmare band is getting to be special. You've got to go back to what you believe in as you start to build your program."

Addison Run is carrying a foal by Constitution, the multiple Grade 1-winning son of Tapit who entered stud this year at WinStar for a $25,000 fee. Brogden said she did not know who the mare will be bred to in 2017.

"I'm a big fan of Constitution. We're very close friends with the Gulatts and I remember when Randy was raving to me about him as a yearling," she said, referring to Randy Gulatt, manager of Twin Creeks Racing, which co-owns Constitution.

Addison Run's first foal, a son of Street Sense born February 8 of this year, went through the ring following his dam, fetching a price of $110,000. Brogden said being able to see the colt was a factor in going to the level she did to acquire the mare.

"I thought her Street Sense foal was gorgeous," she said. "He didn't have perfect vetting, so I knew he wouldn't break out completely (in the bidding). It's just one of those things where I realise she brought a premium, but to have a first foal to look like that was pretty impressive.

"There are several of them where I have gotten off them, because their babies next to them were not impressive."