Benoit buys Moment Of Majesty for her homebred stallion

Mare is set to visit Star Guitar for her next cover 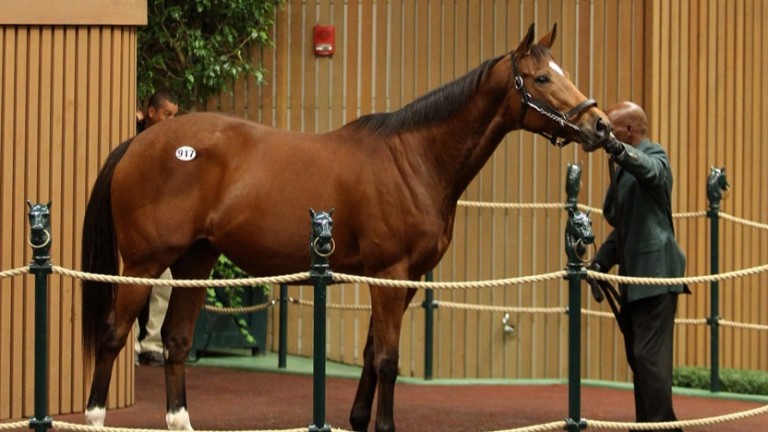 Evelyn Benoit is not your typical horse breeder.

Most buyers of a top-class, $850,000 Thoroughbred mare at public auction would plan a mating for the following breeding season to one of North America's more fashionable stallions.

The nine-year-old daughter of Saint Liam was purchased in the name of Benoit's Star Guitar Inc, named after the Louisiana breeder's top homebred Star Guitar .

Keogh said Benoit bought the mare specifically to breed to Star Guitar, who stands at Clear Creek Stud in Louisiana for $4,000-a far cry from the $100,000 fee for Curlin, the Hill 'n' Dale Farm stallion to whom Moment Of Majesty was bred this year.

Keogh said Benoit's decision to breed such an expensive mare to Star Guitar reflects her desire to give the stallion the best opportunity to succeed.

"It's not about the money with her. It's about the horses," Keogh, part of Benoit's team of advisers, said of the disparity between the mare's purchase price and the stallion to whom she will be bred. "It's family to her. She loves (Star Guitar) so much. He means the world to her."

Racing for Benoit's Brittlyn Stable, Star Guitar won 24 of his 30 starts, including 22 stakes, and retired as the all-time leading Louisiana-bred earner of over $1.7 million. In his only graded stakes placing and rare venture outside Louisiana, Star Guitar finished third in the Grade 3 Alysheba Stakes at Churchill Downs.

Represented by 36 juveniles of 2016, Star Guitar has had two winners from six starters to date, and Keogh said Benoit is getting ready to send out several of her promising homebreds trained by Al Stall Jr.

Keogh said the breeder has supported Star Guitar since he entered stud, sending some 15 of her 22 broodmares to the stallion annually.

With his breeding and superb running ability, Star Guitar likely could have been gone to a farm outside Louisiana, but keeping him in the Bayou State fit with Benoit's support of the state breeding programme. Star Guitar's fee will remain at $4,000 for 2017.

"It's everything to her to support Louisiana's breeders' program," Keogh said. "She had several offers to stand him in Kentucky, but she wouldn't consider it because she wants to support Louisiana racing and breeding. She is passionate about racing. She watches racing three hours a day."

Figures down compared to 2015

Moment Of Majesty was the highlight of a session, which saw across-the-board declines from the comparable day a year ago and closed out Book 2 of the sale that continues through to November 20.

With 291 horses bought back this year, the RNA rate is 30 per cent, compared with 28 per cent though the first four sessions of 2015.

"The quality brought top dollar - no mistake," he said. "There is a polarization and selectivity within the marketplace. Those who have been perceived as quality are very well rewarded and those who don't meet the market aren't."

Russell said one of the strengths of the day were the strong trade for foals of 2016.

"The foal market is very good at the moment," he said. "You have to have the sire power, a good physical. They're maybe a little forgiving on the pedigree."

The top price Friday for a weanling was the $350,000 bid from Mayberry Farm for a Curlin filly from the Hill 'n' Dale offerings. Produced from the Grade 3-placed Jungle Tale, the filly bred in Kentucky by SF Bloodstock is from a solid black-type female family that includes stakes winner Mary Kies, and Italian stakes winner and Group 1-placed Flying Girl.

"She was one of the better-looking fillies that was going to walk up here in the whole catalog," said agent David Ingordo, who signed the ticket. "We tried on some earlier ones but didn't get them, so she kind of the last ones that fit the parameters."

Runway Ready, a half-sister to Grade 2 winner Corfu from the female family of multiple Grade 1 winner Peace Rules, was bought by Three Chimneys as agent for Mike Repole's Repole Stables for $425,000 as the day's second-highest price.

From Eaton Sales, the six-year-old daughter of Mr. Greeley who placed in the Giant's Causeway Stakes at Keeneland was sold in foal to Malibu Moon. Bred in Kentucky by AGS Thoroughbreds, Runway Ready was purchased by Gary Contessa for $75,000 from Sequel Bloodstock at the 2012 Fasig-Tipton Florida March sale of two-year-olds in training.

Her dam, the winning Forest Wildcat mare Fashion Cat, produced Corfu, the son of Malibu Moon who won the Grade 2 Saratoga Special and finished second in the Grade 2 Futurity Stakes at Belmont Park. Fashion Cat is a half-sister to two stakes winners, including $3m earner Peace Rules, winner of the Haskell Invitational, Toyota Blue Grass, and Suburban - all Grade 1s.