Bloodstock Latest BEHIND THE BREEZE-UPS

Con Marnane on his approach to sourcing stock 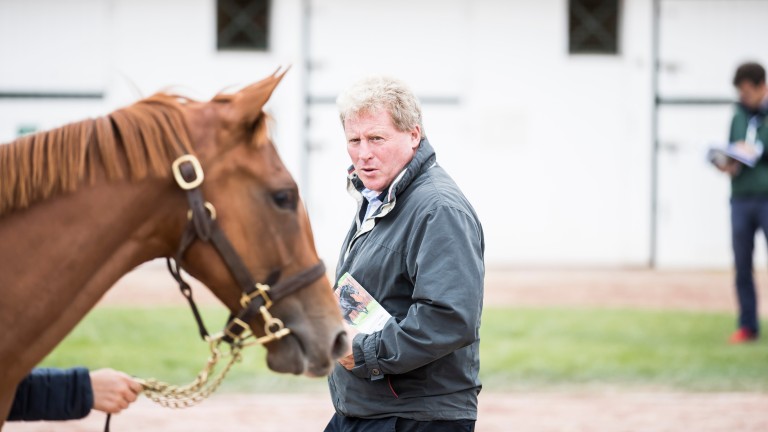 Con Marnane eyeing up a potential purchase at Arqana in Deauville
Patrick McCann
1 of 1
By James Thomas UPDATED 9:17PM, APR 1 2018

The track record of Con Marnane's breeze-up graduates have seen the boss of Bansha House Stables firmly established as a master of his craft.

And this success is underpinned not only by Marnane's ability to prepare two-year-olds to the highest standards, but to select the right raw materials at the yearling stage.

"The breeze-up sales used to be a place where people could get rid of their rubbish," he said when asked about his approach to sourcing stock.

"But it's a completely different business now. We have to buy nice yearlings that will make racehorses to be competitive when it comes to reselling them. We just have to have nice quality stock."

"We've six months to mind them so we can buy a backward horse who'll have become a beauty by April," Marnane added.

"We have a load of them this year that mightn't have been everybody's cup of tea back in September or October because they were weak or a bit babyish, but they're absolute stunners now with muscle at the back of their ears nearly!"

And the good news for those looking to invest in a juvenile hand-picked and prepared by Marnane is that he is sending an eight-strong draft to the Tattersalls Ireland Ascot Breeze-Up Sale, that takes place on Wednesday and Thursday.

"I sold the highest-rated breeze-up horse in Europe last year - Sands Of Mali - out of the Ascot Sale, and I've also sold First Selection - who won the Solario Stakes and finished second in the French Guineas - there, and they're just two that I've sold there," he said.

With Marnane's Ascot breeze-up drafts having been a happy hunting ground for buyers in the past, potential purchasers are advised to form an orderly queue.

The 3,000gns filly who has founded a fine dynasty for Fiona Denniff

FIRST PUBLISHED 6:00PM, APR 1 2018
We've six months to mind and bring them along so we can buy a backward horse who'll have become a beauty by April