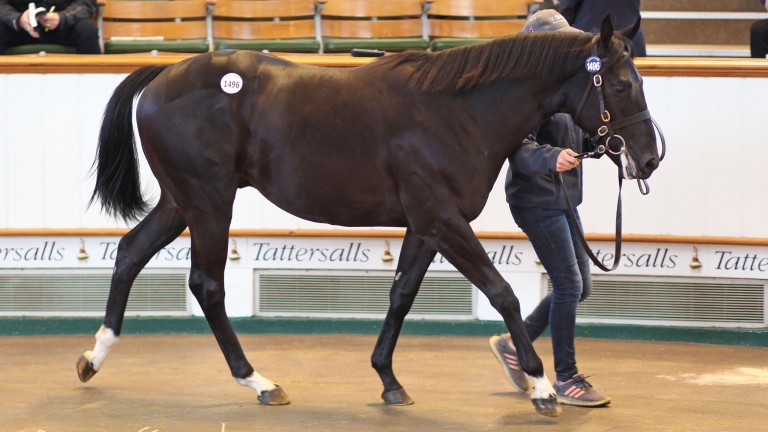 Ballyhimikin Stud's Society Rock colt, who was purchased by Alex Elliott on Thursday
Laura Green
1 of 1
UPDATED 8:45AM, OCT 19 2018

There was a reality check for some vendors on Thursday as trade moved down several gears during the first session of Book 3 of the Tattersalls October Sale.

However, while those horses within the lower sector of the market struggled as anticipated, there remained a vibrant trade for those that stood out among their peers.

"I thought it was very strong today at all levels,” said Norman Williamson. “We've all been here throughout Books 1 and 2 and it's been a fantastic trade right the way through."

Williamson was speaking after landing the session-topping Kodiac colt for 135,000gns through Margaret O’Toole. The colt, part of a powerful draft from Ballyhimikin Stud, was widely touted as one of the stars of the day and he did not disappoint to hand his vendors a fine profit on the €40,000 he had cost under LTM Bloodstock banner as a foal last November at Goffs.

He looks pleased with himself.

Bred by Louise Quinn, he is a half-brother to two winners and out of the Athasi Stakes winner Lucky, a sister to 2,000 Guineas winner King Of Kings.

"Margaret O'Toole and I saw him this morning and loved him," said Williamson. "For us he was the stand-out colt of the day. He has a great action and bit more size from one by the sire. Trade has been fantastic today and we're pleased to be able to get such a nice colt by such a great sire. He'll go breezing and let's hope he's lucky."

His sale ensured that Ballyhimikin Stud ended the day as leading vendor two years on from selling the 200,000gns record holder at this sale, incidentally another son of Kodiac.

"He was bought specifically to go to this sale," said Hanly. "We're big fans of Kodiac, and he was a beautiful foal with a wonderful action from a lovely family."

The stud had earlier been on the mark when selling a Society Rock colt for 100,000gns to Alex Elliott.

He was another profitable pinhook, having been sourced through Anthony Stroud for 40,000gns at last year’s Tattersalls December Sale.

”He will go to Jeremy Noseda,” said Elliott after outbidding John Tyrell and Richard Brown. “He looks a fast horse, a typical horse that Jeremy does so well with, and is from a top farm. We followed a lot of horses through and have been underbidder, so are delighted to get this horse.”

As seemingly the last yearling colt to pass under the hammer by his much missed sire, it was fitting that he should hail from Ballyhimikin given Hanly also co-bred the stallion himself. He is one of only 42 registered foals from his sire’s final crop and was bred by Michael O’Mahony out of the winning Chantaleen, a half-sister to Italian Group 3 winner Spoil The Fun.

"He is the image of his father," said Hanly. "He looks a ready made two-year-old and we thought we'd come here as he looks an ideal horse for the Tattersalls race [the £150,000 Tattersalls October Auction Stakes]. We like to place good horses into this sale as the race is a real incentive from Tattersalls, and I was confident that there would be a good market for this type of horse.”

Fresh from a highly memorable Book 2, Whatton Manor Stud remained on a roll with the sale of a Champs Elysees colt for 90,000gns. Bred by Ropsley Bloodstock and St Albans Bloodstock, he entered the ring armed with a big update as a half-brother to recent Prix Eclipse Stakes winner Sporting Chance and duly became the subject of sustained interest, eventually selling to Kevin Ross on behalf of Paul and Claire Rooney following a duel with Charlie Johnston.

"He's a half-brother to a good horse and he is the first foal out of the mare," said Ross. "He's a beautiful individual as well, so we knew that we would have to push the boat out to get him.”

A pedigree update also served to enhance the appeal of a Tamayuz filly from Lodge Park Stud, who will be trained by Ed Walker after selling for 70,000gns.

The filly is only the second foal out of the Listed-placed Dutch Rose after Sunsprite, a recent third in the Ripon Champion Two-year-old Trophy.

"She's a smashing filly, an absolute belter," said Walker’s representative Ben Harris. "The mare is meant to be really good looking, which has obviously rubbed off on this filly. We know Tamayuz can get a good filly and the two-year-old half-brother is useful.”

Meanwhile, David and Emma Armstrong, who have enjoyed a stellar season with their Prix de l’Abbaye heroine Mabs Cross, will be hopeful that their affinity with Dutch Art continues after going to 70,000gns secure a daughter of the stallion out of Athasi Stakes winner Gossamer Seed.

Day to remember for Glebe Farm

Glebe Farm Stud admitted to entertaining moderate expectations ahead of their Poet’s Voice filly’s turn in the ring but stud owner Denis Barry and his team were in for a pleasant surprise when she went on to realise 80,000gns to Richard Frisby.

Glebe Farm only began selling under their own banner this year and in this homebred, the farm had another cause to celebrate following a bold showing at Book 2.

"She's a big, strong filly for an April foal but we came here with few expectations," said stud manager Carwyn Johns. "We'd seen little footfall down in EE [Solario Barn], certainly nothing compared to Book 2, so we brought her up to the ring a little early and she ended up being out of the parade ring more often than she was in it. It’s a great result.”

Frisby was acting on behalf of an undisclosed client but was able to confirm that their new acquisition will remain in Britain.

"There are a couple of trainers in mind but I don't know at the moment where she will go," he said of the filly who is out of a sister to Champagne Stakes winner Trumpet Major.

"I thought she looked a sharp filly. It was very hard to buy that level of filly earlier in the week and I thought she stood out well as an individual among them today. Hopefully she'll provide a bit of fun.”

A return to auction in the spring is the plan for the other 80,000gns filly of the day, a daughter of No Nay Never bought by Katie Walsh through Stroud Coleman Bloodstock.

The filly was pinhooked for just €17,000 through Jill Lamb out of the Goffs February Sale but has received several pedigree updates since then, notably courtesy of her half-sister, the Group 3-placed Damselfly, and two-year-old half-brother Cosmic Horizon, a winner for Joseph O’Brien in recent weeks.

“Hopefully she’ll come back to breeze next year,” said Walsh. “The two-year-old won the other day, so there’s a bit going on in the family.”

The market responded enthusiastically to the first crop of Hot Streak during Book 2 and that trend carried over into yesterday as the stallion hit an average of 41,667gns for three sold.

Highlighting the trio was a colt bred by Lordship Stud who realised 62,000gns out of the New England Stud draft to Mouse O’Ryan; like his celebrated relation Ribchester, he is set to take up residence at Richard Fahey’s Musley Bank Stables.

“We wanted one for the Tattersalls race,” said O’Ryan, “and this looks a sharp colt. The sire is stamping his stock, they look fast, and this is a good family - you have Ribchester in there.”

His price was later matched by a daughter of Footstepsinthesand from Avalon Bloodstock who was knocked down to Simon Crisford, signing under Stroud Coleman Bloodstock. From the fine Juddmonte family of Nebraska Tornado and Bonash, she has a chance of receiving a big pedigree update tomorrow when her close relation Monarchs Glen lines up in the QIPCO Champion Stakes at Ascot.

The sale continues on Friday at 9.30am.

FIRST PUBLISHED 10:36PM, OCT 18 2018
We've all been here throughout Books 1 and 2 and it's been a fantastic trade right the way through