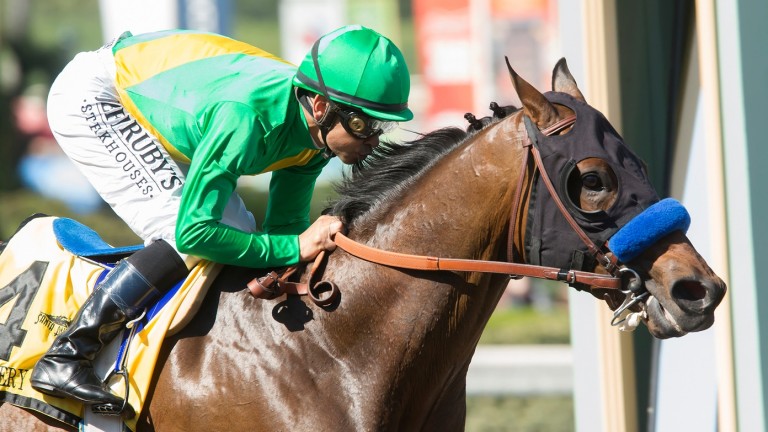 Brilliant US three-year-old Mastery will stand at Claiborne Farm in Kentucky on his retirement from racing.

The son of Candy Ride is currently injured, having undergone surgery last week for a condylar fracture in his left foreleg.

Trained by Bob Baffert, he has a perfect race record having won four races including the Grade 1 Cash Futurity Stakes in December by seven and a quarter lengths. He was last seen galloping a similar distance clear in the Grade 2 San Felipe Stakes in January, the race in which he sustained his injury.

Bred by Stone Farm out of the winning Old Trieste mare Steady Course, he was bought by Cromwell Bloodstock for $425,000 at the Keeneland September Yearling Sale in 2015. A half-brother to the winner Clear Sailing, he is from the family of the great Miswaki.

Mastery is one of ten Grade 1 winners by Candy Ride who has also supplied Shared Belief, Twirling Candy, Gun Runner and Sidney's Candy.

Bernie Sams of Claiborne Farm said: "Clearly, his pedigree and race record make him an exciting stallion prospect. He's in good hands and has a bright future no matter what."

Owner Everett Dobson added: "It's possible for horses to come back from a condylar fracture, but he'll have to be 100 per cent to go back into training. He's a very exciting stallion prospect; he showed brilliance on the track.

"If he does retire, he'd retire undefeated, and he's by a very hot sire with a very good pedigree, so that's the positive side. We look forward to him standing at Claiborne Farm upon retirement, whenever that may be. Give their tradition and reputation in the marketplace for making top stallions, we felt it was a great fit for Mastery."