Average up as Belle leads second session of November Sale 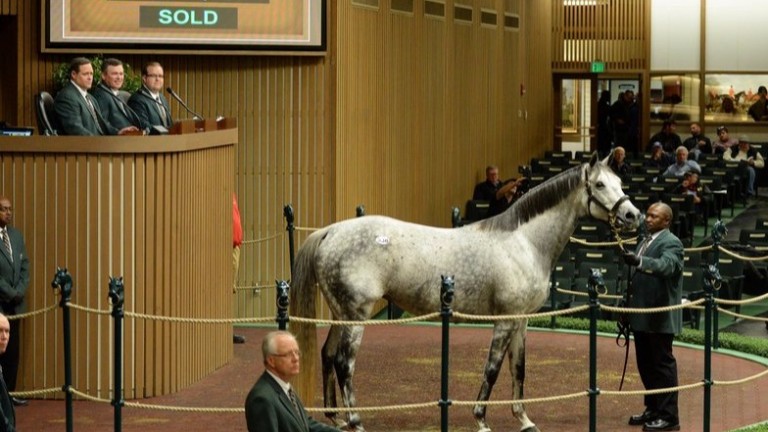 Topped by Unrivaled Belle at $3.8 million, the second session of Keeneland's November Breeding-Stock Sale on Wednesday brought Book 1 to a close with average and median prices up on 2015 as the gross declined with considerably fewer lots sold.

With 26 fewer horses sold, Keeneland reported 253 horses grossed $102.9 million in Book 1, down six per cent from the $108.9m figure for the 279 lots sold a year ago when the sale was topped by champion Take Charge Brandi at $6m.

From 467 catalogued, 112 lots were withdrawn and the resulting 102 that did not sell represented a 29 per cent ratio of unsold lots.

Coming a day after Donald Trump's stunning presidential election victory, the second session saw 138 horses sell for nearly $52.8m, down from the $63.8m paid for 143 a year ago.

While there were some pre-session concerns in view of the Tuesday election results, Keeneland director of sales operations Geoffrey Russell said the outcome did not appear to affect the market.

"It was a very good sale today," Russell said. "It was strong across the board - strong for mares, strong for foals. Mixed sales vary from year to year. You can't do a direct comparison. Yes, we would have liked to have a $6m mare today, but we didn't.

"Everybody was concerned obviously starting off because everybody was expecting a different result. There was a little concern about exchange rates early but the dollar is back strong where it belongs so it didn't seem to stop international buyers today."

Russell said if there was any impact it might have been seen in Japanese buying during the second session following price fluctuations in the yen.

Belle of the ball

Pope, bidding in the rear of the facility, kept upping the ante on the Don Alberto group, seated inside the pavilion as each wanted the mare. Finally, Don Alberto shook off Pope's bid of $3.8m and she walked away with yet another trophy mare to add to her blueblood broodmare band that includes horse of the year Havre De Grace and champion Groupie Doll.

Pope said she found the Book 1 market, during which the best horses in the sale are sent through the ring, extremely strong.

"The market has been unbelievable, that's all I can say," the horsewoman said. "If you want the nice mares and the nice weanlings, you're going to have to pay for them right now."

Pope said she is hopeful that the nation's economy continues to improve with Trump's election and have a positive effect on the horse industry.

"And after last night's election, we hope that things continue on and the economy will move forward," said Pope. "And hopefully we'll have more money for purses. We hope Trump is a racing man. He's a big gambler so we'll see if he'll put a little investment into the horse industry."

The bay colt, foaled Jan. 25, was bred in Kentucky by Elevage II and was presented as Hip 408 by Hill 'n' Dale Sales Agency. He was produced from the Encosta De Lago mare Drifting Cube, who was purchased by Hill 'n' Dale for $1,018,000 at a Magic Millions auction in 2014.

Hill 'n' Dale's John Sikura said there did not seem to be as much demand for foals as he hoped, resulting in a handful from his consignment to be bought back and others representing good values for their buyers. Hill 'n' Dale also sold the second-highest foal of 2016 when Baccari Bloodstock went to $1.5m for a Tapit colt who is a half-brother to champion Honor Code .

"It seems to me that the breakout foals are not happening," Sikura said of the weanling market. "You can't ever make the marketplace, all you can do is try to be on top of it. We had a couple of high end foals that we didn't sell that we'll sort out amongst our group. When you have unique, particular, high-quality horses, you can afford to value them and stand by your values, which we will.