Average dips by 12 per cent as muted January Sale ends

Lack of major dispersal blamed for decline in figures 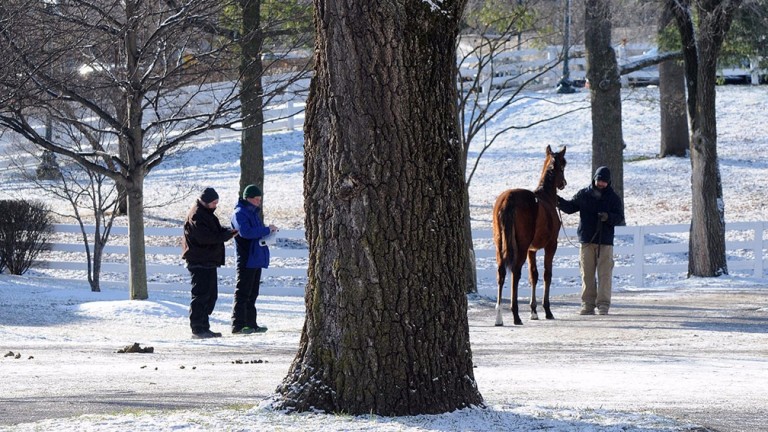 Keeneland: all key economic indicators were down on last year's January Sale
Keeneland/Photos by Z
1 of 1
By Ron Mitchell of Bloodhorse 4:23PM, JAN 14 2017

The Keeneland January horses of all ages sale came to an end on Friday with across-the-board declines for the auction that was bereft of a depth of quality offerings.

The 440 horses that did not reach their reserve prices represented an not-sold rate of 31 per cent compared with 25 per cent in 2016, when 347 were bought back.

Friday's finale was topped by Singsong, a winning four-year-old Unbridled's Song filly bought by Machmer Hall for $52,000 from the Buck Pond Farm consignment.

As one of the last public auctions before the start of the North American breeding season, the January sale provides a marketplace for some breeders wanting to move mares or bring in fresh stock to their operations. Others use it as venue for mares in foal to top-end stallions and just-turned yearlings.

In addition to lacking a dispersal, the sale lost some of its drawing power with the withdrawal of some top broodmare or racing prospects because they had recently been in Louisiana where an outbreak of equine herpesvirus (EHV-1) ostensibly had an impact on this year's numbers.

After horses at Fair Grounds Race Course & Slots tested positive for EHV-1, the Office of the Kentucky State Veterinarian imposed an embargo on any horses that have been at a Louisiana track or training facility since December 10 from shipping to any track or training facility in Kentucky. Keeneland placed restrictions on any horse that had been in Louisiana following that date.

"This was a typical January sale without a dispersal," Geoffrey Russell, Keeneland's director of sales operations, said. "Dispersals always do add a little flavour. I thought the quality offerings we had here sold really well and probably sold better than anticipated. There was good competitive bidding.

Russell said the January sale was a continuation of trends seen in other sales throughout 2016 and that breeders should look at those results in relation to their programmes.

"This is nothing new. I would hope breeders would look at the sales season of 2016-17 and act accordingly," the sales executive said.

Reiley McDonald of Eaton Sales signed the ticket for Siren Serenade on behalf of Don Alberto.

The mare was the first horse to eclipse the seven-figure mark at the January sale since 2015 when the Galileo mare Up was sold for $2.2m.

Concerns over lots with no bids

While the quality mares and yearlings were in demand, at the other end of the spectrum, 86 horses went through the ring for which there were no bids. Last year, 38 did not attract a single bid.

"It's a sad situation where these horses don't meet the market and there's nobody there at all, but I think breeders and consignors need to take a look at that and start evaluating that at the time of entry," Russell said.

Gainesway's Tapit was leading sire, with ten horses selling for $1,384,000. The sale-topper also made Tapit leading covering sire by gross.