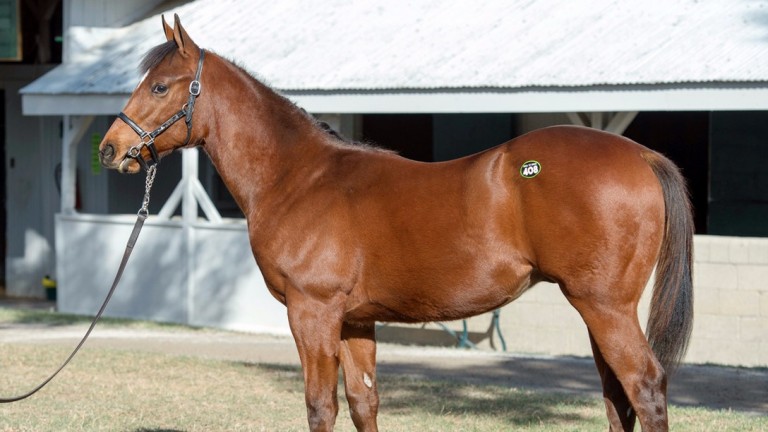 John Sikura remembers clearly how he felt like "a fish out of water" when he traveled to Australia in May 2014 and bought two broodmare prospects from the Teeley Assets dispersal at the Magic Millions National broodmare sale for the equivalent of $2.4 million.

"It was the southern hemisphere and pedigrees that were a bit unfamiliar. I took a deep breath and bought two expensive maiden fillies. When they got home, everybody scratched their heads and wondered if I'd lost my mind," recalled Sikura, owner of Hill ‘n' Dale Farms in Kentucky. He related how his staff were unfamiliar with the Australian brands stamped on the fillies' shoulders as well as with their bloodlines.

But what he called his experiment with elite Australian bloodlines rewarded Sikura richly at Keeneland on Wednesday, as the first foals produced by his purchases sold for a combined $1.975m, nearly recouping the bold investment.

An elegant War Front weanling colt out of Drifting Cube, a sister to speedy Australian sprinter Rubick and from the immediate family of leading Australian sire Redoute's Choice, drew $1.45m from Coolmore's MV Magnier to top all weanlings sold during the two-session Book 1 of the 13-session Keeneland November Breeding Stock Sale.

Magnier said the colt would probably be sent to Europe to race. Coolmore currently stands Rubick, a son of its former top sire Encosta De Lago, at its Australian base.

"We've had a lot of success in the past with the family," Magnier said, adding of the bay weanling colt: "He's a very good mover, he has a lot of quality. Let's hope he keeps on improving."

"This horse sold very well. He was a long, beautiful horse - he certainly brightened the day," declared Sikura, who noted that the overall robust market had some downs as well as ups.

Hill ‘n' Dale sent four horses through the ring that were listed as not sold on seven-figure bids ranging from $1.25m to $1.55m.

But his weanlings from the Australian mares did not disappoint. The other mare Sikura bought in Australia, Taste Of Heaven, a winning sister to Group 1 winner and sire Manhattan Rain and thus a half-sister to Redoute's Choice, produced a Medaglia D'Oro filly this spring. That filly proceeded the War Front colt through the Keeneland ring and sold for $525,000 to the Fung family's Aquis Farm of Queensland, Australia.

"It worked out well," Sikura said of his experiment. "And I think it's good for international commerce that the pedigrees work and we start to trade with each other. I hope and think the Australians will feel bullish about our market and be more active in our market, show some reciprocity, because their pedigrees sell well here."

Sikura added that he hopes the War Front colt emerges as a future top runner for Coolmore.

"I don't think there are better or more game judges of horses in the world than the Irish operation," he said. "They loved the horse and they didn't hesitate [on bidding] so I hope he is their next champion. He has a lot of firepower behind him [as a future stallion prospect] if he can run."

FIRST PUBLISHED 7:08PM, NOV 10 2016
I don't think there are better or more game judges of horses in the world than the Irish operation