Fastnet Rock colt aims to follow in footsteps of Starspangledbanner 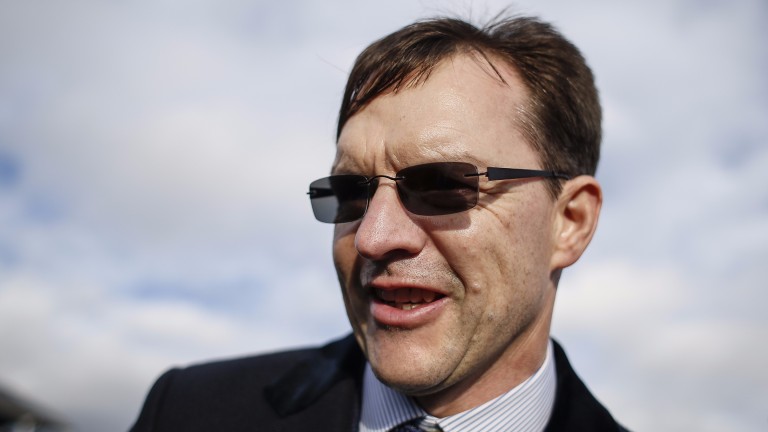 Aidan O'Brien: "the Diamond Jubilee looks the perfect race for him"
Alan Crowhurst
1 of 1
By Martin Stevens UPDATED 2:27PM, MAR 13 2018

Crack Australian sprinter Merchant Navy will be handed the opportunity to secure a northern hemisphere stallion career when he joins Aidan O'Brien's string at Ballydoyle to prepare for a tilt at Royal Ascot.

The three-year-old's future in Australia is already secure after Coolmore agreed a deal reported to be worth A$30 million to ensure he will stand alongside his father Fastnet Rock at the conclusion of his racing career, which will likely come at the end of the current Australian season.

Unbeaten at two, when he struck at Listed level, Merchant Navy has blossomed into one of the leading southern hemisphere sprinters for Aaron Purcell this season.

He took the Coolmore Stud Stakes by a head from Invincible Star in November, prior to the valuable stud deal being struck. Racing under the management of Coolmore but leased back to his original owner for the remainder of his career, he returned last month with close third to Super Cash in the Group 2 Rubiton Stakes before finishing only a neck behind Redkirk Warrior in the Newmarket Handicap at the weekend.

O'Brien has enjoyed plenty of success with Australasian imports at Royal Ascot in the past, notably Haradasun, So You Think and Starspangledbanner and is looking forward to giving Merchant Navy the chance to showcase his talent to a wider audience.

"I am very excited by Merchant Navy," he said. "I was very interested to see his run on Saturday and I thought he was unlucky not to win. I love that he can produce a long, sustained burst of speed and the Diamond Jubilee at Royal Ascot looks the perfect race for him."

Trainer Ciaron Maher, who sourced Merchant Navy at the 2016 Inglis Easter Yearling Sale, said: "He was an outstanding yearling and I've rated him as something special ever since the day he first cantered.

"He's a brilliant colt with an incredible constitution and I look forward to him showcasing his talent at Royal Ascot. Aidan has invited me to visit Ballydoyle to discuss the horse in the coming days and I'm very much looking forward to that. I have no doubt that he's a horse capable of excelling on the world stage."

Merchant Navy was bred by Chris Barham out of the Group 1-placed Snippets mare Legally Bay, making him a brother to the smart pair Legalistic and Zara Bay.

FIRST PUBLISHED 12:09PM, MAR 13 2018
Aidan has invited me to visit Ballydoyle to discuss the horse in the coming days and I'm very much looking forward to that