She is way better than average, says jockey Seamie Heffernan 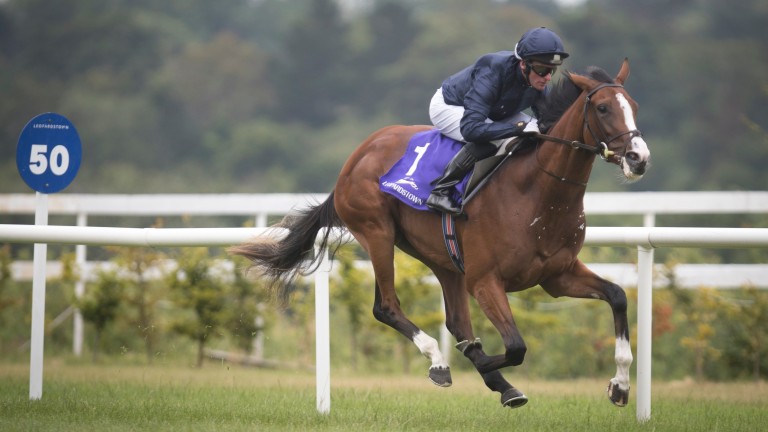 Cherry Hinton, a half-sister to Galileo and Sea The Stars, has already produced two Group/Grade 1-winning fillies in Athena and Bracelet. There must now be hope that a third is on the horizon after her two-year-old daughter Goddess scorched to a ten-length victory on her second start in a 7f maiden at Leopardstown on Thursday.

Goddess, trained by Aidan O'Brien for a partnership of John Magnier and John Sikura, had finished ninth on her debut at the Curragh a fortnight ago but had gone into countless notebooks after being denied a run at several opportunities.

She made no mistake second time around, making all and quickening clear to defeat the Dermot Weld-trained Australia filly Munees Gemini by a huge margin.

See the full result and watch the race replay

Jockey Seamie Heffernan said after the race: “Goddess should have won at the Curragh. It was a typical Irish race, they were all boxed in looking at each other.

“I just let her jump and stride along today. I don't know how good a race it was but she is way better than average.”

Goddess is of course bred to be way better than average.

She is by Coolmore's second-season sire Camelot, who is enjoying a red-hot summer with a double courtesy of Hunting Horn and Arthur Kitt at Royal Ascot and supplying his first elite-level winners through Irish Derby hero Latrobe and Goddess's sister Athena, who was successful in the Belmont Oaks on Saturday.

Cherry Hinton is a daughter of Green Desert and Arc heroine turned legendary broodmare Urban Sea, thus making her a half-sister to four Group/Grade 1 winners – the late Black Sam Bellamy and My Typhoon as well as Galileo and Sea The Stars.

Urban Sea also produced Oaks runner-up All Too Beautiful, the dam of another Oaks second in Wonder Of Wonders and granddam of Oaks third Alluringly, and Oaks third Melikah, the great-granddam of this year's Derby hero Masar, who is actually inbred to Urban Sea as he is by Galileo's son New Approach.

Cherry Hinton was second in the Blue Wind Stakes and fifth in the Oaks herself, and has emulated Urban Sea as a producer of multiple Group/Grade 1 winners.

Her first foal Wading, by Montjeu, won the Rockfel Stakes and is the dam of this year's smart two-year-old Just Wonderful, while Wading's sister Bracelet landed the Irish Oaks and Ribblesdale Stakes.

Athena, by Montjeu's son Camelot, has won many admirers by maintaining a high level of form in a busy spell, winning a Fairyhouse maiden, taking fourth in the Ribblesdale Stakes, third in the Pretty Polly Stakes and winning the Belmont Oaks all since May 31.

Five absorbing angles behind the breeding and buying of Latrobe