At The Sales MAGIC MARE

Elarqam's half-brother was bought by Shadwell for 1,350,000gns 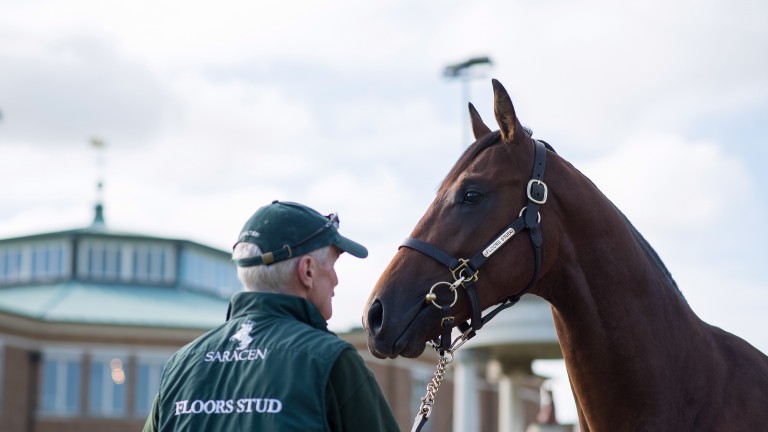 The Dubawi colt out of Attraction strikes a pose in front of the Tattersalls sales ring
Edward Whitaker
1 of 1
By James Thomas UPDATED 4:32PM, OCT 5 2017

If anyone in the Scottish borders wonders why they can hear the sound of champagne corks popping, that'll be the Duke of Roxburghe returning home to celebrate a remarkably fruitful week in Newmarket.

Last week the duke witnessed his Floors Stud graduate Elarqam maintain his unbeaten record with an impressive success in the Group 3 Tattersalls Stakes on the Rowley Mile. And then, just seven days later, he sold that colt's Dubawi half-brother to Elarqam's owner Shadwell for 1,350,000gns during the concluding session of Book 1 of the Tattersalls October Sale in Newmarket on Thursday.

"What a week!" said the duke. "It was nerve-wracking when Elarqam ran last week. Mark Johnston said it publicly, but I felt the same - it's been a long time since I've been so nervous before a race.

"It's great to sell them well because it's crucial to the running of the stud. But at the end of the day we're trying to breed racehorses, and Elarqam is certainly something to look forward to over the winter.

"To breed a horse that wins a Group 3 as well as he did on just his second start is a real thrill. We won't have a yearling out of Attraction in Book 1 next year so hopefully we'll have something to celebrate after the 2,000 Guineas instead."

Elarqam and his Dubawi half-brother are, of course, out of the duke's dual Classic winner Attraction, who has now registered back-to-back seven-figure yearlings in the Tattersalls sale ring, after Elarqam fetched 1,600,000gns from Shadwell 12 months earlier.

The daughter of Efisio, who was famous for her unconventional conformation, has now had five of her offspring - including the Group 3 winner Fountain Of Youth - come under the hammer during Book 1 for a total of 4,020,000gns

"With Shadwell doing so well with Elarqam I'm thrilled they've got his half-brother," said the duke. "This colt wasn't as obviously good-looking as Elarqam when he was younger, but he's thrived through the summer and during his sales prep, and now he's a beautifully balanced colt. He's been a saint up here - fantastic, as he's been here without his mates.

"Attraction is in very good form. She has a beautiful filly foal by Invincible Spirit who will not be coming to the sales - she's been named already and is called Motion. Attraction is back in foal to Frankel and is carrying a colt."

Despite the fortunes of Attraction and her progeny, the duke and John Warren, who assists the duke with his matings, explained that the mare's story had an altogether more modest beginning.

"I hope you've told them you had to be bludgeoned into using Efisio!" Warren quipped on the £8,500 covering that led to Attraction as the duke was being interviewed.

"Attraction's dam [Flirtation] only ran once - she was a lovely big stamp of a mare by Pursuit Of Love. She had ability but she was unsound" added the duke. "Because she was such a lovely big, strong mare I ended up keeping her even though she wasn't a winner."

FIRST PUBLISHED 2:22PM, OCT 5 2017
Attraction is in very good form, she has a beautiful filly foal by Invincible Spirit who will not be coming to the sales