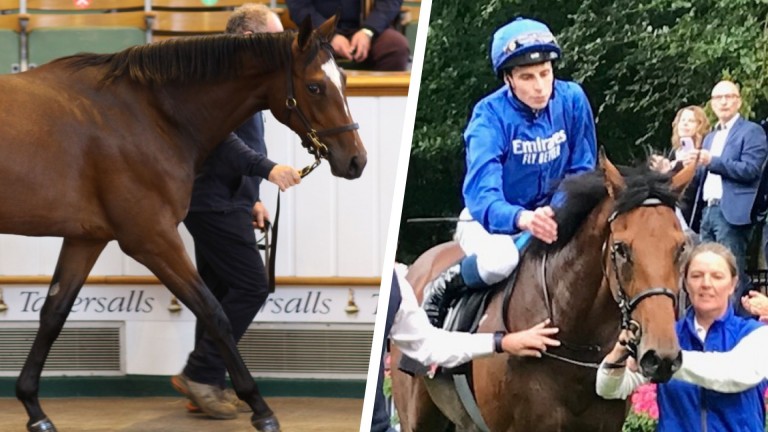 The last few days witnessed not one but two of 2020's highest-priced yearlings take to the track for the first time, their punchy seven-figure price tags naturally bringing with them much interest and weight of expectation. Here, the Racing Post's Juvenile Judge David Baxter assesses how Hafit and History performed, and what the future could hold for the regally bred pair.

Having cost Godolphin 2.1 million guineas last October at Tattersalls Book 1, Hafit's first start was always going to generate plenty of attention. Charlie Appleby has been entrusted with the son of Dubawi, out of Attraction's daughter Cushion, and the early signs are very encouraging.

Bounced out to lead by William Buick at the July course, Hafit did take a while to respond when ceding the lead around three furlongs out. But, to his credit, he rallied well for Buick and got better the further the race went.

He stayed on powerfully when hitting the rising ground out of the Dip, and was probably value for slightly more than the official half-length winning margin.

Like many of his rivals from that race, Hafit should make into a much better three-year-old, and a mile to a mile and a quarter should prove ideal.

Appleby said his next outing will likely be over a mile in the Autumn Stakes. While I would be interested in him for next season's 2,000 Guineas, I'm not as taken with him as a potential Derby horse.

View the race result and replay

Time will tell if History will live up to such an enticing name, but Coolmore's 2.8 million guineas filly – who went through the Park Paddocks ring 48 hours after Hafit – showed plenty of promise on her debut, despite being comfortably beaten.

Noticeably weak in the market, even with Ryan Moore coming in as a late replacement when stablemate Concert Hall was scratched, the pre-race betting suggested History would need her debut experience.

That proved accurate, as the daughter of Galileo out of Mohaather's sister Prize Exhibit travelled on the pace but when push came to shove she started to wander around under pressure.

Although sticking to her task, History's greenness meant she had no answer to Cairde Go Deo, who already had a run under her belt and made that experience count.

History was beaten just over four lengths, but in turn she was over two lengths clear of the third. A seven-furlong trip was always likely to prove some way short of her optimum, and she should be much wiser next time.

She is still very much a name to note and could be featuring prominently come the autumn, and also next spring.

View the race result and replay

Preview of a very special edition of the Saratoga yearling sale

FIRST PUBLISHED 3:01PM, AUG 9 2021
He stayed on powerfully when hitting the rising ground out of the Dip