Progeny of Deep Field, Capitalist and Pride Of Dubai all crack A$500,000 barrier 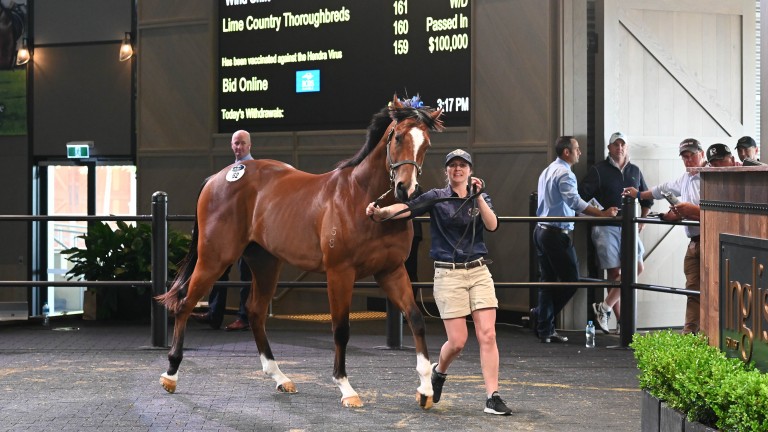 Demand for high-end bloodstock shows no signs of slowing down after what is believed to be a record price for a two-year-old sold at public auction in Australia was broken twice at the Inglis Ready 2 Race Sale, an appetite fuelled by Asian buyers who secured four of the five highest-priced lots.

The figure paid for the Lime Country Thoroughbreds-consigned Deep Field colt, who was bought by the Macau Jockey Club and Louis Ho with Hong Kong-based trainer David Hayes, also surpasses the $540,000 mark set at the 2015 Inglis Ready 2 Race Sale and the $525,000 reached at last year’s Magic Millions Gold Coast 2YOs in Training Sale.

A Pride Of Dubai also sold for $530,000 to underline the strength of the market at the top end, which was also illustrated earlier this year at the Covid-affected breeding stock sales.

The willingness of the buying bench to embrace online bidding and rely on the opinions of agents on the ground to help shape their decisions was a factor that did not go unnoticed by Inglis managing director Mark Webster shortly after the conclusion of the sale.

“The sale got off to a slower start than we expected while the market was trying to assess where it was at, but I think the results in the end were surprisingly good, noting that we’re in the Covid environment, and that there are travel restrictions in place and effectively the borders are closed with Victoria and Queensland and there are no internationals here,” Webster told ANZ Bloodstock News.

“For us to have achieved a record gross, which is currently sitting at $10.9 million, so it’s going to get to $11 million easily enough, a record price for a lot offered and a record average of [nearly] $100,000, I think that is very good under the circumstances.

“The strength at the top was particularly good and the confidence in buyers from Melbourne and Asia to bid online or through an agent here when they were absent was quite extraordinary.”

The clearance rate of 65 per cent, down two per cent on last year’s sale, again emphasised buyers not being prepared to compromise on quality and being prepared to pay a premium when they were happy with the horse, demonstrated by the fact that the median of $70,000 was up $10,000 year-on-year.

“The Hong Kong market has bought three of the top five and Busuttin and Young have bought the other two, so you could say that the top five horses were bought by people who were not here, which is fabulous,” Webster said.

“That’s the part you don’t really know. I guess at the Easter sale [in April] we had to sell pretty much everything to people who weren’t present, but there had been a fair degree of on-farm inspections that had taken place in advance of the restrictions coming into place, so we knew we had that up our sleeve.

“It’s a little more difficult here where some of those people haven’t been able to see the horses at all, so they have had to rely on a trusted person to report back to them - either an Inglis person, or an agent or a vet, so for them to bid with that degree of confidence is excellent.

“It also shows that there’s very strong demand, particularly from Hong Kong, for quality horses and it’s a compliment that they would think of our breeze-up sale, which gets horses like Wishful Thinker winning at the weekend and is a graduate of this sale format.”

The top-priced Deep Field colt, who ran 10.3 seconds at Taupo in New Zealand for Regal Farm before transferring to Lime Country Thoroughbreds to be prepared for the sale, was a $230,000 Inglis Classic Yearling Sale purchased by Regal Farm, Upper Bloodstock, Teng Long and McKeever Bloodstock.

The second foal out of Exceed And Excel mare Wind Shift, he was catalogued as Lot 162. 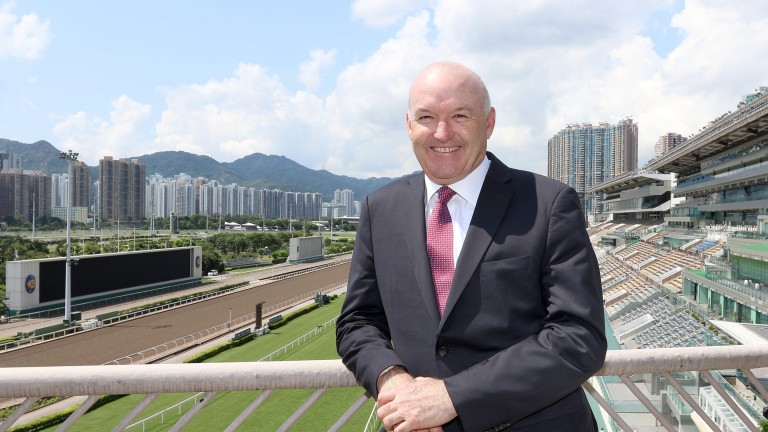 David Hayes: 'ecstatic' to secure the sale-topper
HKJC
Hayes said: “We’re ecstatic to secure the colt. Louis Ho from the Macau Jockey Club was instrumental in purchasing the horse. The horse will now go to Lindsay Park in Euroa to let down and a further decision will be made on his future in coming weeks after a short spell.

“We just loved him. He’s a particularly sharp looking horse with great balance who breezed up well.”

Lime Country Thoroughbreds’ Greg Griffin, who along with wife Jo stepped in to assist their New Zealand countrymen when they were unable to travel with the horses to Australia, was delighted for Regal Farm’s Shane Crawford and Kara Waters after the record-setting colt’s sale.

He said: “We’re really, really happy. Shane and Kara from Regal Farm, along with Brett and Cherry from Trelawney, have sent the draft across to us in outstanding order.

“They do a great job and it’s just really good to get good results for good people who have been supporters of us for a long time, so I’m stoked for them.”

Griffin acknowledged the growing reliance on an online market, which will take time for vendors to adjust to, but credited an increased transparency for giving buyers confidence to bid.

“It’s been odd having horses that you know are going to sell well but aren’t parading anywhere near as much as they should,” he said.

“You’ve got to be guided by opinions of friends in the industry, by the sales company, by registrations and that sort of thing. They’ve done a good job to get buyers online and involved.”

Ho happy to back Vella’s judgment with Capitalist gelding

The prominent owner, who has more than 70 horses in work in Australia, won an aggressive bidding duel to secure the horse by the young Golden Slipper-winning stallion who stands at Newgate Farm.

Offered by Glenn Haven Thoroughbreds, the $170,000 Mitchell Bloodstock-purchased Inglis Classic Yearling Sale graduate breezed up in 10.17 seconds at Warwick Farm last month and came in for strong competition from buyers.

It was Ho, bidding over the phone via Inglis’ Jonathan D’Arcy, who secured the likely sprinter under his Legend Racing banner.

“He breezed up very well and he came highly recommended by Matt Vella of Glenn Haven Lodge,” Ho said from Hong Kong.

“I have a few Capitalists myself already and they are all promising types. I think this stallion is going to be very successful so I was very happy to be able to add another one to my stable.

“As the sale suggests, this horse is ready to race. He will stay in Australia and be trained by Matt Vella.

“I have a lot of respect for Matt as a horseman, he’s very capable and I look forward to this horse showing us all how good we think he is.”

The revelation that Vella, who broke in the horse, would retain the gelding was pleasant news to the young Hawkesbury-based trainer.

Vella said: “A few guys here saw the horse and liked him and they approached Mr Ho. He texted me to ask me if I liked him, given he was in my draft, and I told him I did. He’s a very nice horse to be taking home.

“I’m thrilled to be able to train this horse and I’m very grateful to Mr Ho for the support he’s given me. He’s bought himself a nice horse. It just shows you can find nice horses at these sales.”

The gelding will be immediately put into work with Vella earmarking the $2m Inglis Millennium at Randwick in February as an early target.

“As I said in every interview I did pre-sale, I urged the owners to take the horse out of the sale and give him to Peter Snowden or someone like that and run him in the Breeders Plate but, true to their word, they kept him in and it’s great they’ve got this result.

“The Golden Slipper might be getting ahead of ourselves, but all the good horses I’ve broken in, including Slipper winners, they were all like this bloke: very forward and very strong.”

Catalogued as Lot 35, the gelding is the first foal out of Gosford Guineas winner Lady Sniper.

The vendors of the two highest-priced lots through the ring, Lime Country and Glenn Haven, also topped the averages for leading vendors at $236,000 and $165,000 respectively.

Earlier in the session, another strong pinhook result was achieved when a $120,000 Inglis Australian Easter Yearling Sale graduate by Coolmore’s Pride Of Dubai with a strong Hong Kong pedigree was on-sold for $530,000 to K F Cheng.

Prepared by Hannover Lodge, he breezed up in 10.86 seconds at Warwick Farm. The colt, who was catalogued as Lot 21, is a half-brother to the stakes-placed Thorondor and out of Listed winner Impressive Eagle, who in turn is a half-sister to Queensland Derby winner and Hong Kong Group 2 winner Eagle Way.

Hannover Lodge’s Hinnerk Hueppe said: “It’s amazing. We’re so grateful and happy for our clients and...it was a result everyone was looking for this morning. To buy a quality horse and then get him here and sell him for a price, it’s really well deserved.

“He’s a beautiful horse by Pride Of Dubai who just kept on improving and we’re over the moon.

“We’ve been well supported by Hong Kong clients and they are also supporting this sale, which is good to see. They are buying good quality yearlings hoping they can race them, and even if they can’t make it to this sale, we can deliver a result.”

FIRST PUBLISHED 2:50PM, OCT 20 2020
The strength at the top was particularly good and the confidence in buyers from Melbourne and Asia was quite extraordinary