Colt was pinhooked by Powerstown Stud 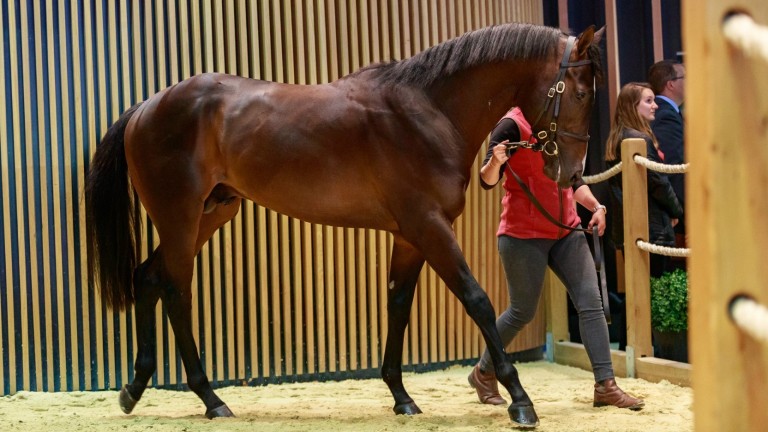 Powerstown Stud's rewarding pinhook Ete Indien made considerable progress along the road to the Kentucky Derby with an impressive wire-to-wire victory in the Grade 2 Fasig-Tipton Fountain of Youth Stakes at Gulfstream Park on Saturday.

Tom and Alexandra Whitehead's County Kilkenny operation bought the handsome son of Summer Front for $80,000 as a yearling at Keeneland September.

Although not immediately well-related, the colt is from the family of Breeders' Cup Classic winner Raven's Pass and he found plenty of interest when returning to the ring at the Arqana May breeze-up with US-based trainer Patrick Biancone landing the final bid at €240,000.

Bred in Kentucky by Robert Tillyer and Eric Buckley, Ete Indien is owned by a large group including Biancone, Linda Shanahan and Sanford Bacon and is now a winner of three of his five starts.

He was second in last month's Holy Bull Stakes over the same extended mile and showed huge improvement here, being bustled along by Florent Geroux to overcome his wide draw by the first bend and stretching eight and a half lengths clear by the post.

The victory secures 50 Kentucky Derby points, which should see him qualify for the Derby on May 2, and Biancone will now decide about future outings.

"He went through a week of hiccups," he told BloodHorse. "First he lost his jockey, then he drew (on the outside), but good horses can overcome anything, and I think he's an exceptional horse. We look forward to the future."

He continued: "I want to see how he comes out of this," he said. "Next time, he will have to improve a little bit to win the Florida Derby, but we're here in Florida, he trains in Florida and loves Florida. I think we'll take a shot if he's in good form."

Powerstown's most notable breeze-up graduate to date is Quiet Reflection, who went on to land the Commonwealth Cup and Haydock Sprint Cup.

Hunter Valley Farm had picked him up for €120,000 from Mocklershill and the breakthrough win for Brendan Walsh was in the colours of Qatar Racing.

FIRST PUBLISHED 9:45AM, MAR 1 2020
Good horses can overcome anything, and I think he's an exceptional horse