Daughter of Monsun is a half-sister to Midas Touch 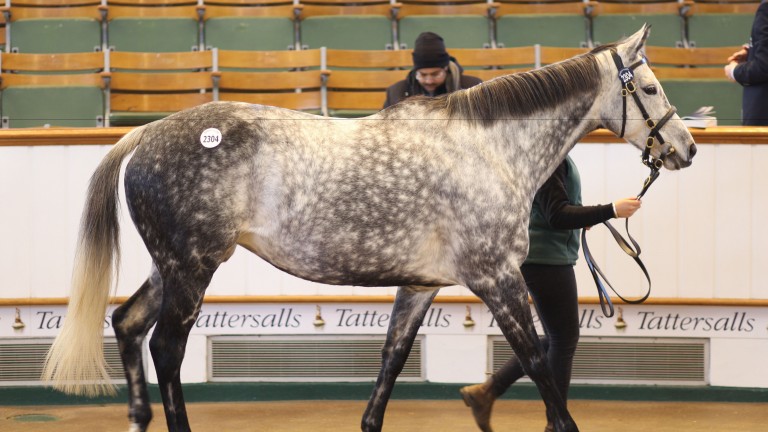 The curtain came down on a record year of trading for Tattersalls on Thursday in Newmarket with the fourth and final instalment of the December Mares Sale.

Although the sale ended softly with a subdued final session, it concluded a week of trade that featured investment from a wide range of international buyers, particularly those from America, who were estimated to have accounted for 3,000,000gns worth of stock, Australia and Japan to complement a deep buying base of domestic and European buyers.

“It has been a privilege to have welcomed buyers this week from every continent in the world and they have all contributed to a uniquely diverse sale which has brought our anniversary year to a successful conclusion,” said Edmond Mahony, chairman of Tattersalls.

“The unprecedented annual turnover demonstrates the sustained appetite for quality European bloodstock in all sectors of the market and this has been clearly reemphasised throughout the December Sale. Record demand at the October Yearling Sale and the Autumn Horses in Training Sale has been followed by truly global participation this week. While the catalogue may not have been regarded as a vintage one, it has still inspired vibrant international competition.”

Mahony added: “Eight of the top ten highest priced foals in Britain and Ireland, 76 foals selling for 100,000 guineas or more and a further 110 breaking the six figure mark this week, are all clear indicators of a market in which quality has been well rewarded. The ten highest priced mares and fillies this week were sold to buyers from Britain, France, Ireland, Japan, South Africa and the USA, while buyers from Australia, China, and the Gulf region also made significant contributions at every level of the market.

“As ever, we must thank our vendors, British, Irish and from further afield, who make the Tattersalls December Sale the premier sale of its type in Europe. Every year we visit as many overseas markets as possible, but the consistent support from our vendors is equally crucial in annually attracting the major global players to the December Sale.”

Peter and Antoinette Kavanagh of Kildaragh Stud picked up the dearest lot of Thursday’s final session when paying 38,000gns for the regally-bred Arabescatta through Federico Barberini.

A multiple winner, the daughter of Monsun is a half-sister to Group 2 winner Midas Touch, also Classic-placed, and out of Listed winner Approach, a Darshaan half-sister to Aussie Rules. However, perhaps more importantly, she is also a half-sister to one of the more exciting three-year-olds for next year in John Gosden’s Coronet, the unbeaten Zetland Stakes winner who is as low as 12/1 for the Oaks.

"She's a nice type by Monsun,” said Barberini. “Unfortunately she’s not in foal but it’s a huge page - she comes from a tremendous family.”

After producing four consecutive foals including the winning Amico Americano, Arabescatta was sold on Thursday barren to Helmet by The Castlebridge Consignment.

Lancashire-based Nick Cable made a return to familiar territory when paying 32,000gns for the winning Toast Of The Town, a relation to champion three-year-old sprinter Mince in foal to Havana Gold.

Cable co-bred the daughter of Duke Of Marmalade and sold her for 160,000gns as a yearling.

"I've waited all week for her," said Cable. "She was a stunning foal and she's still very good looking. The family's been very lucky for me. There are no plans yet, I'll get her home and have a think."

Toast Of The Town is one of five winners out of Boast and a half-sister to Listed-winning two-year-old Strut, in turn dam of champion three-year-old sprinter Mince.

Spencer snaps up Excello for the future

Former Royal Ascot two-year-old Excello was another to attract her share of admirers when selling for 32,000gns to trainer Richard Spencer.

The winning daughter of Exceed And Excel ran third in the 2010 Windsor Castle Stakes for Malcolm Sanders and is already the dam of a winner from three foals of racing age.

However, Spencer is looking forward to the future with the mare, who was sold as barren to Iffraaj.

"We have her two-year-old La Isla Bonita," said Spencer. "We think quite a bit of her and hopefully she’ll be out before the new year.”

The only other mare to surpass the 30,000gns mark yesterday was proven producer Sweet Cando. Tally-Ho Stud went to 31,000gns to secure the winning daughter of Royal Applause, the dam of smart Hong Kong performer Jacobee who was sold in foal to Casamento.